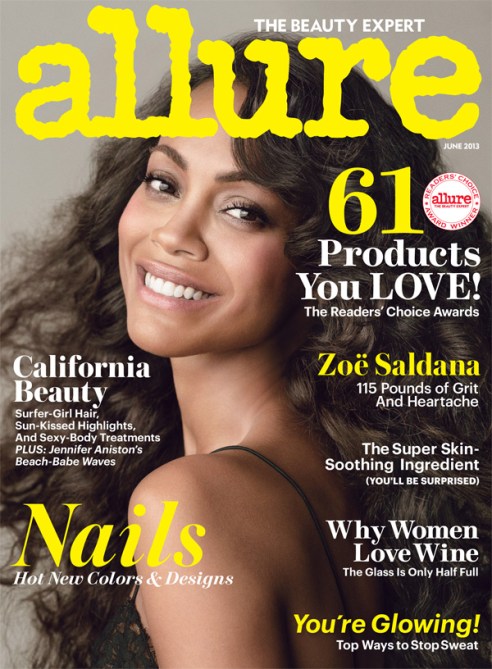 Well, this is interesting. Zoe Saldana is on the cover of the June issue of Allure magazine, and she’s not alone—the “Star Trek: Into Darkness” star’s weight (115 lbs.) is front-and-center with her. That means that according to the National Health Institute’s official Body Mass Index calculator, the beautiful 5’7″ star is technically underweight by half a percentage point.

And pretty  much all of those 115 lbs. are on display in the magazine, which features photos of Saldana entirely nude aside from a gold H.Stern bangle on her arm. “This is the first time I’ve shown so much of myself on a shoot,” Saldana said of her experience. “I felt so beautiful.”

And her body isn’t the only part of her she bares; Saldana also reveals that she was “raised open enough” to envision her life partner as another woman. “I might end up with a woman raising my children. That’s how androgynous I am!” But has the star—who was in a 12-year relationship with entrepreneur Keith Britton and then an on and off-again affair with Bradley Cooper—ever actually dated a woman?  “Promise me one thing: you’re going to ask this question [in the article]—if you choose to, just put three dots as my response. That’s it,” she tells the magazine.

Head to Allure.com to read the rest of the interview! And tell us in the comments below: what do you think of Allure putting her weight so prominently on the cover?