From Big Little Lies to The Batman, it’s understandable why fans want to know about Zoë Kravitz‘s net worth and how much she’s made from her hit shows and movies over the years.

Kravitz—whose full name is Zoë Isabella Kravitz—is the daughter of musician Lenny Kravitz and actor Lisa Bonet. She was born on December 1, 1988, in Los Angeles, and made her on-screen debut in high school after she starred in her first movie, No Reservations, opposite Catherine Zeta-Jones, in 2007. Kravitz, whose parents divorced when she was five years old, went on to star in films likeX-Men: First Class, Mad Max: Fury Road, the Divergent series and the Fantastic Beasts franchise before her role as Bonnie Carlson in HBO’s Big Little Lies, in which she starred opposite actors like Reese Witherspoon, Nicole Kidman and Meryl Streep. Kravitz’s success continued with her own Hulu show, High Fidelity, in 2020 before she was cast as Selina Kyle / Catwoman in the DC Extended Universe’s Batman franchise.

In an interview with Backstage in 2020, Kravitz opened up about how her career has evolved over the years. “There was this puppy energy when I was younger, in an audition,” she said. “I just really wanted to be liked…. Now, when I do read for things, I’m really thinking about it in terms of if I had this job already, I would say, ‘This line doesn’t make sense. Can we do it like this?’ You’d communicate with the director the way you do if the job was yours.” She also reflected on what it was like to grow up with two parents who also worked in Hollywood. “I had a lot of time to use my imagination,” she said. “So making up characters and putting them on shows and singing songs, that was always the way I entertained myself and others around me.”  She also revealed the piece of advice her mother gave her about working as an actor. “Rejection is protection,” she said.

How much did Zoë Kravitz make from The Batman? 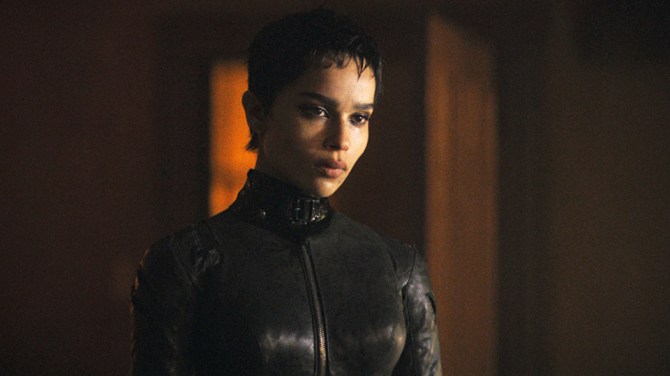 How much did Zoë Kravitz make from The Batman? Kravtiz stars as Selina Kyle / Catwoman in 2022’s The Batman. The character—a cat burglar and an antihero to Batman—first debuted under the name “the Cat” in the DC Comic, Batman #1, 1940. Along with Kravitz, the character has also been played by Michelle Pfeiffer in 1992’s Batman Returns, Halle Berry in 2004’s Catwoman, and Anne Hathaway in 2012’s The Dark Knight Rises, among other actors. Kravitz also voiced an animated version of the character in 2017’s The Lego Batman Movie.

While Kravitz’s Batman salary hasn’t been confirmed, Variety reported in 2021 that her co-star, Robert Pattinson, was paid $3 million for his role as Bruce Wayne / Batman in The Batman, which means that Kravitz likely made less than him. As for other actors in the DC Extended Universe, Forbes reported in 2016 that Henry Cavill made $14 million for his role as Clark Kent / Superman in 2013’s Man of Steel, while Gal Gadot made $300,000 for her role as Diana Prince / Wonder Woman in 2017’s Wonder Woman and $10 million for 2020’s Wonder Woman: 1984, according to Variety. Deadline reported in 2017 that Ben Affleck—who played Bruce Wayne / Batman in movies like Batman v Superman: Dawn of Justice and Justice League—made between $10 million and $20 million for the role. Cosmopolitan also reported in 2021 that Jason Momoa, who played Arthur Curry / Aquaman in 2018’s Aquaman, made $15 million for the role.

In an interview with Empire in 2021, Kravitz revealed how she prepared to play Catwoman. “We watched cats and lions and how they fight,” she said. “and talked about what is actually possible when you’re my size, and Batman’s so much stronger than me. What is my skill? It’s being fast and tricky. So we did some really interesting floor work that incorporated different kinds of martial arts and capoeira and a kind of feline, dance-like movement.” She continued, “[Rob]’s not just trying to do a bunch of impressive backflips that wouldn’t be possible for that person to do, and he takes into account where we are in the story and where the characters are emotionally. So it was really fun to work from that place.” She also explained how her version of Catwoman is different than past movies with the character. “This is an origin story for Selina,” she says. “So, it’s the beginning of her figuring out who she is, beyond just someone trying to survive. I think there’s a lot of space to grow and I think we are watching her become what I’m sure will be the femme fatale,” she said.

Kravitz also told Variety in 2020 that she was nervous to take on the role of Catwoman because of the pressure she felt from DC Comics fans to do the character justice. “I was excited when I got the role, and usually when you get a job the people who are excited about it are you, your parents, your agent, your friends and that’s kind of it. But when the press release came, I got more text messages and calls than I’ve gotten on my birthday, on my wedding day. All of a sudden, the reality began to sink in about what this means not only to me, but to everybody else culturally — and the fans of this universe are so dedicated and opinionated,” she said. She continued, “It was a little scary, but also whenever I get nervous about something, I feel it pushes me to a better place anyway, so I welcome the nerves. If you start focusing too much on what people are going to think you’re doing yourself a disservice, it’s almost like you’re putting your energy in the wrong place. Of course, I want to honor the fans and hope they like what I do with the role, but in order to do what I think I need to do with Catwoman I have to go internal and forget about the rest of the world.”

Kravitz recalled her audition for Catwoman in an interview with Elle in 2021. “[Director Matt Reees] gave me a motorcycle helmet and was like, ‘Walk in, take it off, and start the scene.’ I was like, ‘This is how I don’t get the part.’ I don’t get the part because the helmet gets stuck on my head, and I don’t look cool. I’ll get my lines, but I will fuck up this helmet moment,” she said. She also remembered telling herself not to “get excited” when she first heard about the role from her agent. “One thing I’ve had to learn from an early age is when you get attached, it’s hard, and most of the time, you don’t get the part. So my instinct is always to say, ‘It’s not mine,'” she said. When she booked the role, Kravitz revealed that she heard from more people than she’d ever heard from before. “The fandom is wild. When the announcement came out, I got more phone calls than I’d gotten on any birthday,” she said. She also told the magazine about what it was like to train as Catwoman. “Obviously, you want to look good in a catsuit, but I wanted it to be realistic that I’m able to do anything in this film,” she saids. “So I had to be strong. I got stronger than I’ve ever been. That felt good, to see what I was capable of. I felt confident—and I could kick some ass.”

In an interview with Nylon in 2015, Kravitz revealed that she was told she couldn’t audition for 2012’s The Dark Knight Rises because she was too “urban.” “In the last Batman movie, they told me that I couldn’t get an audition for a small role they were casting because they weren’t ‘going urban.’ It was like, ‘What does that have to do with anything?’ I have to play the role like, ‘Yo, what’s up, Batman? What’s going on wit chu?’” she said.

How much did Zoë Kravitz make from Big Little Lies? 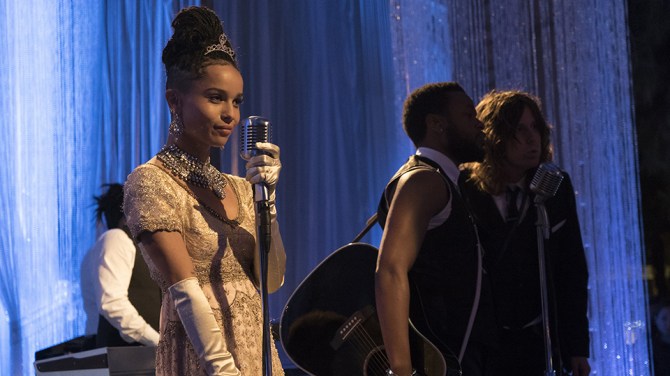 How much did Zoë Kravitz make from Big Little Lies? Kravitz starred as Bonnie Howard Carlson in two seasons of Big Little Lies, which aired on HBO from 2017 to 2019 and was based on Liane Moriarty’s 2014 novel of the same title. According to The Hollywood Reporter, Kravitz made $380,000 for season one of Big Little Lies and $3 million for season two after her part expanded and the show became a critical and commercial success. The magazine also reported that Reese Witherspoon, who played Madeline Martha Mackenzie, and Nicoel kidman, who played Celeste Wright, made between $250,000 to $350,000 per episode for season one, with executive producer fees from the show’s back end. According to The Hollywood Reporter, Kidman and Witherspoon’s salaries increased to $1.25 million per episode for season two. The magazine also reported that Shailene Woodley, who played Jane Chapman, made $1.7 million for season one and also received a sizable raise for season two.

In an interview with Harper’s Bazaar in 2018, Kravitz revealed that she didn’t imagine Big Little Lies would become the success it was. “Our crew right now, on Big Little Lies, is great. There are so many women on our set—it’s so cool. I feel a different kind of energy, this feminine energy,” she said. “Not only because the cast is dominated by women, but also because props and costume and grips and lighting and camera operators are too. My experience doing all my emotional scenes, I’ve never felt so safe and supported. It’s really allowing me to go to a deeper place.” She continued, “I knew that it touched on some really important things, and that it was a nice mix of parenting and female friendship, and also that it incorporated real issues and dealt with domestic violence in a way that had never really been done before.”

She also complimented the writing of the show and the fleshed-out characters. “[The complexity] is the thing that attracted all of us to the characters. I don’t think I realized that not only were we as actors and artists hungry to do that, but people are hungry to see it and receive it,” she said. “It’s a similar thing with the Harry Potter spin-off sequel, Fantastic Beasts: The Crimes of Grindelwald, which I have coming out in November. It’s been such a crazy experience being part of an epic world that has such an incredible fan base. It’s similar to filming the second season of Big Little Lies. The excitement can be turned into pressure for it to be great. But that also creates motivation.”

What is Zoë Kravitz’s net worth? 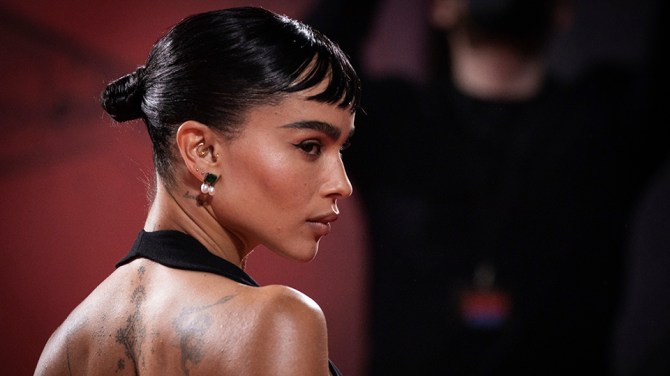 The Batman will be available to stream on HBO Max on April 19, 2022. Here’s how to watch it for free.