Happy Oscars, folks! I’m here to report that this is Zendaya’s world and we’re all just living in it. The star has been a red carpet mainstay for years now, so I wasn’t exactly shocked when her 2021 Oscar’s look shot to the top of my own personal Best Dressed list. I mean—come on! It doesn’t get much better than what she showed up in tonight.

It makes sense that Zendaya would pull out all the stops for the Oscars—it is the biggest show of the awards season, after all! Sadly, she isn’t actually nominated for anything, but when you look this good, who even cares?? To be fair, the 24-year-old has a few prestigious awards under her belt already, including an Emmy for her moving performance as Rue in HBO’s cult-favorite drama, Euphoria. As for an Oscar, hey, there’s always next year!

The Malcolm & Marie actress showed up at the 93rd annual Academy Awards looking positively jubilant in a gown by Valentino Couture, featuring a dramatic midriff cut-out and accented by some massive Bulgari diamond necklaces and Jimmy Choo heels. Z contrasted the formal gown with long, casual waves in her hair for total mermaid vibes and her boho-chic glam was done by makeup artist Sheika Daley using all Lancôme. She even had a matching yellow mask for when she stepped off the carpet! Z might not have any Oscars of her own just yet, but she has well and truly won the night in my eyes when it comes to her fashion choices. 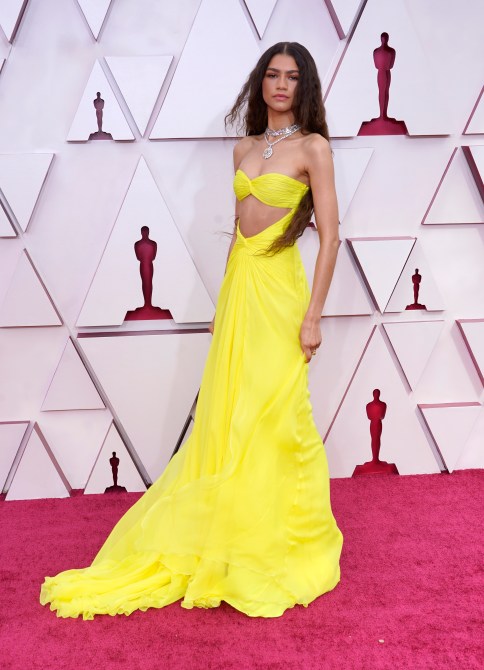 My favorite part about Zendaya’s red-carpet look, though? The fact that it actually took place on a real red carpet! Maybe it was not the red carpet—you know, the one that comes complete with a wall of photographers and is flooded with TV correspondents from every major network—but it’s not virtual, and I’ll take it!

It’s not an exaggeration to say that awards season has looked a little different this year. However, The Academy unveiled a plan a few weeks ago in hopes of making this year’s Oscars seem slightly more normal than the virtual shows us viewers have endured over the past few months. Academy president David Rubin announced that only the nominees, presenters and their guests would be able to attend the ceremony IRL in an email last month.

Oh, and no one was allowed to Zoom in! This came after the announcement that the ceremony would take place in two locations in order to keep everyone safe: the Dolby Theatre and Union Station, both in downtown Los Angeles. Honestly, it’s a little weird, but I’ll take what I can get! 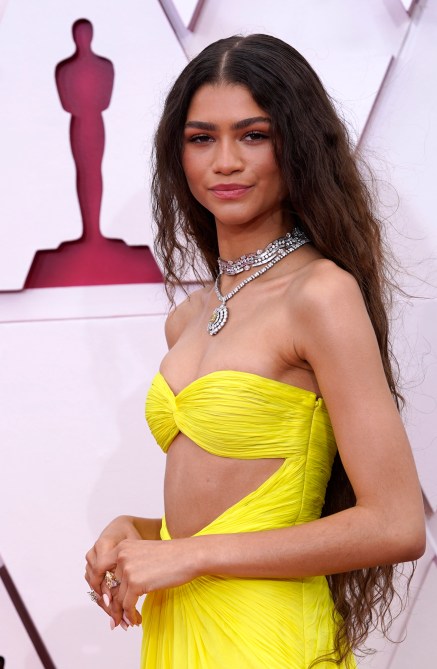 I digress; back to the look. Zendaya worked with her longtime stylist Law Roach to create the show-stopping getup, as is expected at this point. The dynamic duo have been creating iconic looks together for years now. Nothing makes me happier than seeing my favorite celebs look stunning and Roach has proved time and time again that he’s the stylist to get the job done!

I think it’s safe to say that If Zendaya is the queen of red carpet appearances in 2021, then Roach is her supportive king. We stan them both! And because of Roach, I will be here trying to copy Zendaya’s style until the end of time.