Knitting may seem like the ultimate anti-Millennial hobby—slow, methodical, utterly impossible to do while tapping out work emails or scrolling through Instagram—but for those who love it, it’s practically a daily necessity, as ritualistic as regular meditation or a morning workout.

Faustine Badrichani and Margaux Rousseau know this phenomenon particularly well, being both young, avid knitters and the founders of Wooln, a premium knitwear startup focusing on handmade accessories like cable-knit beanies and ultra-soft snoods.

While terms like “artisanal” and “small-batch” are such buzzwords that even McDonald’s has co-opted them, the Wooln founders hit upon a novel idea to make their brand stand out from the pack: rather than finding a factory to produce their goods, they cased senior centers around New York City and hired local grandmothers to knit each and every piece.

Along with the hand-made touch, the brand uses only ethically-sourced, sustainably-produced yarn: alpaca from communities in Bolivia and Peru, merino wool, and cashmere in partnership with Lion Brand yarn company. All of which feels incredible—and, according to the knitters, is equally exceptional to work with.

“I’ve become a yarn snob,” laughs Gloria Herman, a grandmother of six who lives on Roosevelt Island and has been knitting for the company since the spring. “The yarn we use is so wonderful. It’s so nice to knit with. And everyone that touches it, when they ask me what I’m working on, they say ‘Ohhh, it’s so soft.’” 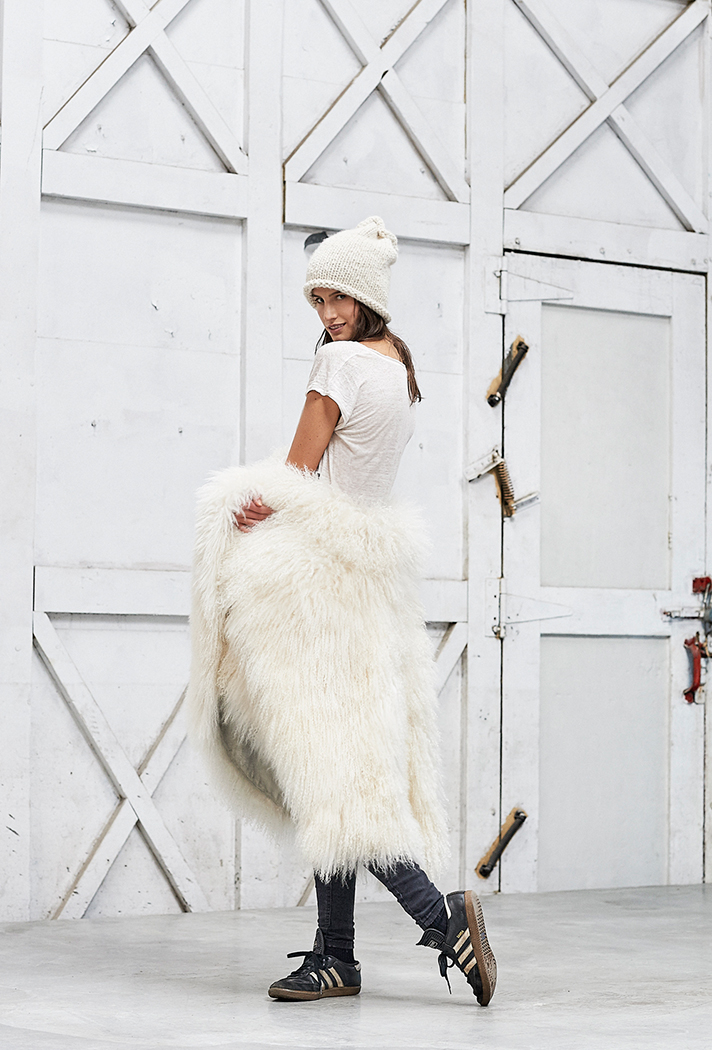 Herman, like many of the Wooln knitters, has been knitting as long as she can remember—since she was 8 or 9 years old, she estimates. Her daughter spotted the brand last year at a market hosted by Brooklyn Makers, and Herman emailed the founders right away. At the time, they were still in their first season, and with four knitters on board, they didn’t need any additional hands. But come March, they had drummed up enough interest in their initial collection that they were ready to expand, and Herman signed on along with four other local senior women, bringing the team to nine. Knitters work from home (or parks, subways, and coffee shops, as the case may be) and are paid on a per-item basis, taking home a portion of the retail cost, which ranges from $65 for an alpaca/merino headband to $195 for a chunky snood.

It’s not a huge paycheck, admits Herman, who estimates she’s made about 10 hats for the brand, but her reasons for getting involved go beyond money: “I feel like I have a responsibility. Here I took a different hat to work on, and it’s another little learning experience. And I’m the type that likes a challenge and to try things that I normally don’t do.”

For Rousseau and Badrichani, the decision to tap into retiree talent wasn’t just a clever move to keep production local—they want the brand to help strengthen multi-generational relationships and celebrate seniors’ oft-overlooked skills.

“We’re really trying to build a community of knitters on one side and a community of buyers on the other who care about what they buy and why they buy it—who want something local and handmade,” says Badrichani.

Rousseau, a lifelong knitter, has worked in the field for over a decade—at one point even mulling the idea of becoming a sheep shearer—while Badrichani is a recent convert. “Now I’m probably more obsessed than Margaux is, though,” she laughs.

Both mothers themselves, they also want to promote passing down these skills to younger generations, just as they say they’ve learned so much from spending time with the women they work with.

Which Beauty Subscription Box is Right for You?