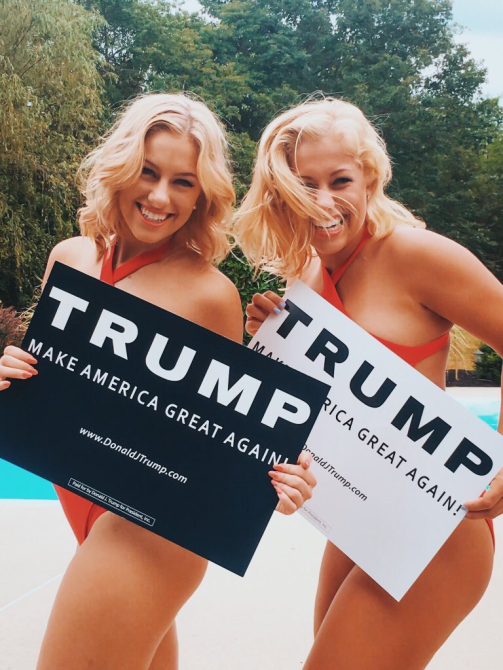 When #TrumpGirlsBreakTheInternet started trending last week—as a result, apparently, of a creepy white rapper named Baked Alaska’s tweet—it fanned the flames of a conversation that’s been happening since the real-estate mogul became the GOP’s official nominee (or before): What motivates a modern, intelligent woman to vote for Donald Trump?

So we decided to ask some. Especially in the midst of polls showing Hillary Clinton beating Trump by a narrow margin with women (54% currently plan to vote for HRC), we felt the need to understand the mind-sets of ladies—especially young ones—who aren’t bothered by what many people consider to be Trump’s displays of egregious sexism and flagrant bigotry.

I spoke to five women between the ages of 20 to 32, representing a variety of locations in the US, and got their perspectives. 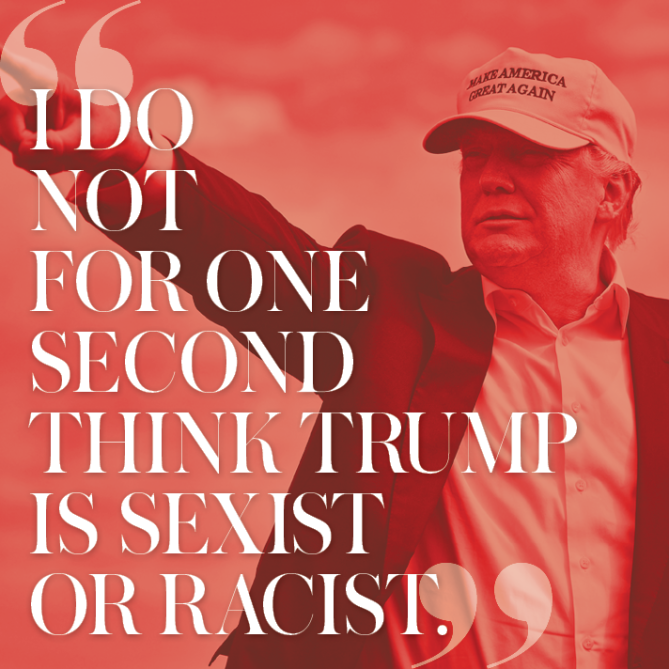 According to all of the women I spoke to—several of whom have been featured by the female pro-Trump Twitter account @babesfortrump—Trump’s demeaning comments about women do not reflect how he actually feels about them. “Actions speak louder than words,” says Ashley, 32, a stay-at-home mom from Massachusetts. “His own daughter, Ivanka, is independently successful, educated, and professional. That doesn’t happen if your father is sexist. Trump pays his female employees on the same pay scale and in some cases even higher than men. I think he misspeaks sometimes, but I do not for one second think he is sexist or racist.”

Corey, an attorney based in Miami, Florida, agrees—though she’s quick to acknowledge that he has made some unequivocally offensive comments. “I won’t sugarcoat it; Trump says a lot of really stupid things about women, minorities, and a myriad other things,” she says. “Yet I have no doubt that he would be able to advocate for our gender.” For these women, Trump’s perceived track record matters more than what tumbles out of his mouth. 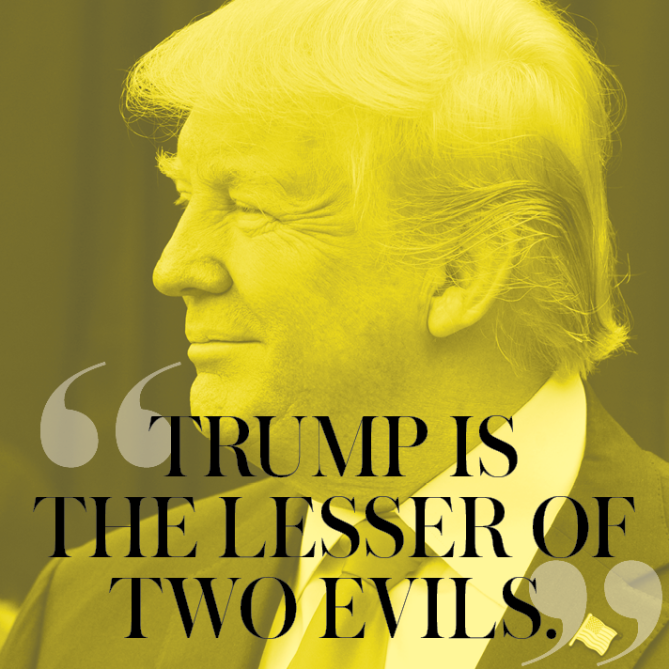 For some women, that reason alone is enough. In fact, Corey says that’s the main reason she’s voting for him. “I don’t agree with everything he says, and a lot of it I have problems with, but my concerns about Trump in no way come close to my concerns about Hillary,” she says. “For me, it’s about choosing the lesser of the two evils in an uninspiring election cycle. That’s Trump.”

“Trump is honest, unlike Clinton,” says Samantha, 20, of New Jersey. “He genuinely cares and actually follows the law. “As far as I’m concerned, Clinton cares more about her money and power than she does about the future of this country. Her track record is a clear reflection of that. Trump has intentions that benefit the entire country. Hillary is only looking out for herself.” 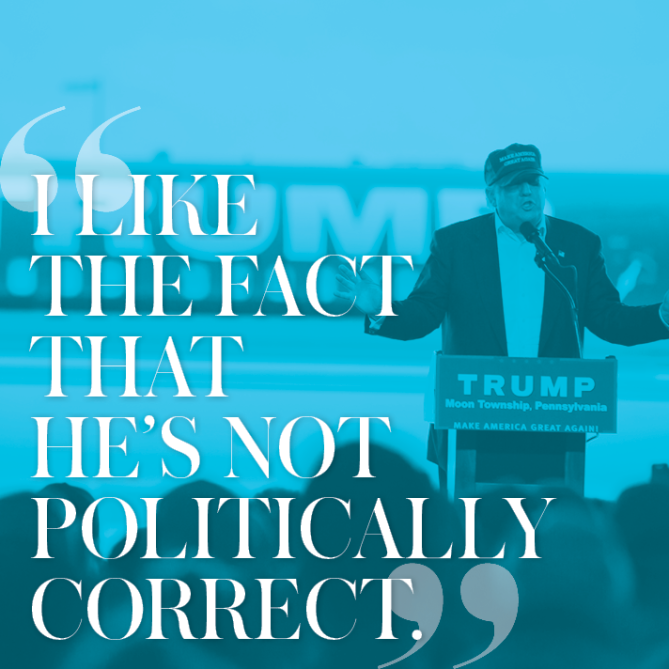 He’s Not in Washington’s Pocket

Trump’s history as a businessman, not a politician, in addition to his accumulated personal wealth, means he doesn’t owe anyone any favors—and for some voters, that makes him a more attractive, less corrupt candidate. “Donald Trump has always had to play by the rules because he’s in business, and he would not be where he is if he didn’t,” says Sam. “He’s honest, he’s transparent, and the American people want someone they can trust.”

Ashley agrees: “Like him or not, we don’t have to question who he is. There’s a comfort in that, especially among the blatant lying and corrupt party politics that are being highlighted during this election.” Ashley and Sam echo the sentiments of many Americans who seem to find his ‘realness’ refreshing. 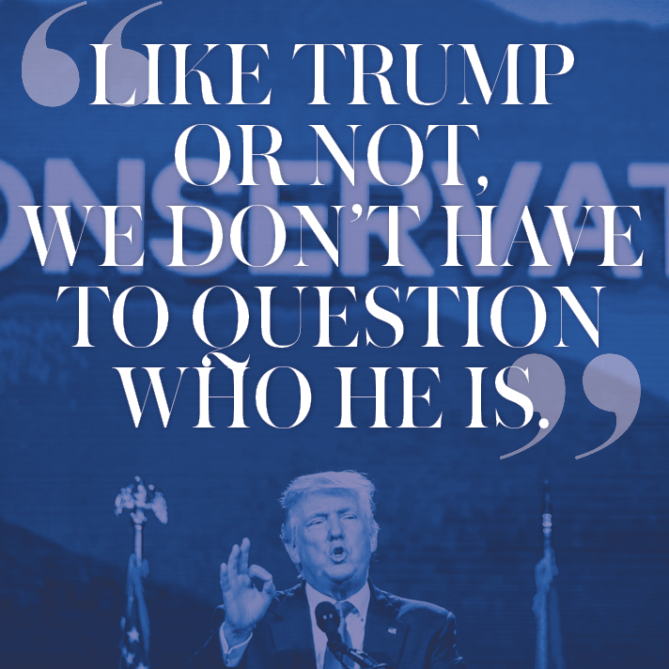 The fact that some voters believe Trump puts Americans first adds to his appeal. “Trump could be retiring soon or taking vacations, but instead he has been relentlessly fighting for the American people,” says Sarah, 20, of New Jersey. “It’s so selfless, and many Americans are touched by his patriotism. He renewed so much lost American spirit in doing so.” Her sister Samantha agrees. “I love his spirit and patriotism. He truly cares and is concerned about the future of our nation. I love how he wants to make veterans a top priority.” 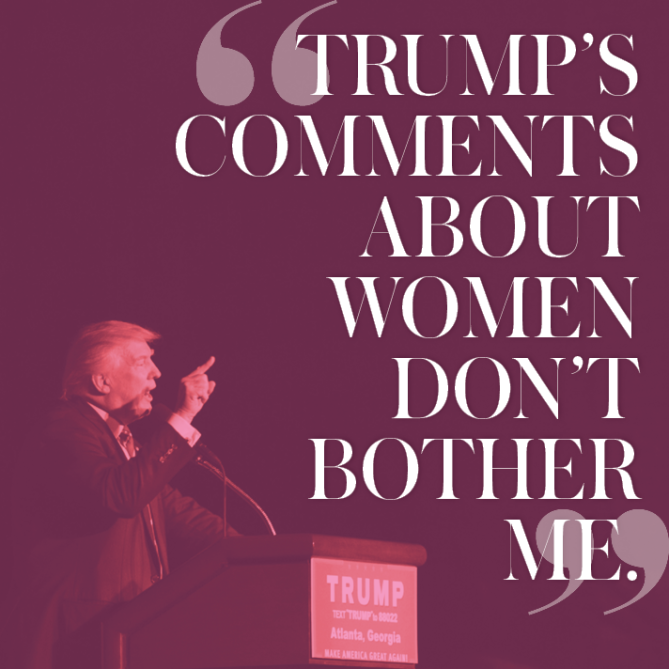 While some people might feel his background as a reality-TV host makes him unfit for the presidency, others believe his big (make that gigantic) personality is a strength. “Donald Trump is communicative, sensational, and heroic,” says Sarah. “He’s real and exciting and has created an incredible movement, not just a campaign. A couple months back I had the privilege to hear him speak at a rally personally, and the way he talks with the crowd—and not at them—is just marvelous. He speaks from the heart and has been himself his entire campaign, which is why so many Americans trust him and have been able to connect with him.” Perhaps his ample screen time on The Apprentice is another reason why people genuinely feel that they know him. 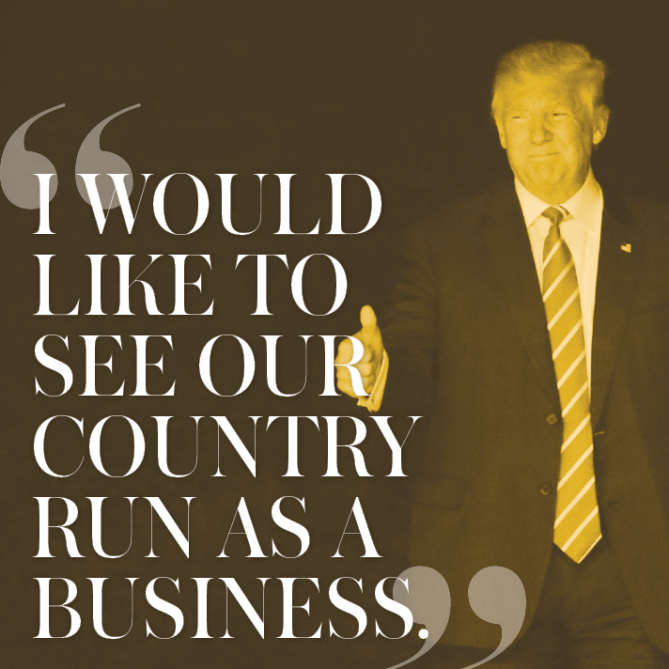 He Can Improve the Economy

While Trump’s argument that he’s qualified to make America’s economy thrive due to his own personal business acumen doesn’t fly with lots of critics, who cite the four times he filed for bankruptcy, Trump’s supporters beg to disagree. “I find it hard to save in an economy where the cost of living is high and salaries—at least in the legal market I work in—are modest,” says Corey. “On top of this, I fear that the taxes I will be responsible for in the future are going to reflect the massive debt we have incurred as a country. This bothers me particularly when I think about the waste that exists in government and the federal programs I am personally opposed to that so much of my paycheck is funding.” Trump, and his promises about fiscal policy and tax code changes, are the closest reflection of Corey’s economic values—and a far safer bet, she believes, than Clinton.

Alicia, 25, of Houston, is on the same page. “I am for small government,” she says. “I’m putting myself through business school, I hold a full-time job, and I believe in giving hand-ups, not handouts. I would like to see our country run as a business, and Trump is the best CEO for the position. He has a tremendous amount of experience with negotiation, which will come in handy once he’s in office.”

There you have it: A peek into why Trump has won the support of young American women—and this is just a glimpse of a few who were willing to be interviewed. Others declined, possibly for fear of a phenomenon Alicia mentioned. “I’ve noticed that there are many silent Trump supporters—people who are afraid to speak out for fear of people’s judgment,” she says. “But Trump became the Republican nominee because people really do love him, and truly believe he’ll make American great again.”

MORE: How These 6 Smart Women Became CEOs Before Age 30