Winnie Harlow wants people to know that, no, not everyone with vitiligo looks alike, and, yes, assuming so is racist. The 23-year-old model made this clear on Monday when she shut down a man on Twitter who assumed that another vitiligo woman’s nudes were hers.

The interaction happened after nudes of a woman with vitiligo, a skin condition that results in discoloration and a loss of pigment, went viral on Twitter. The picture featured the woman leaning back with her head cropped out. Because the woman’s identity was unknown, one man assumed that the nude picture was of Harlow, who swiftly shut him down.

“@winnieharlow this is you ahlieeeee?” the man tweeted. “tHiS iS yOu AhLiEeE?” Harlow responded. “So all people with Vitiligo look the same yea? Pretty sure this would be racism if it was 2Asian, 2black or 2white people. I definitely have photos in bathing suits & my skin looks nothing like hers, (as beautiful as her skin is.)”

MORE: 13 Unique and Inspiring Instagram Beauties You Should be Following

After pointing out that the woman’s skin looks nothing like hers, Harlow compared the man’s assumption that two people with vitiligo look identical to the misconception that all Black or Asian people look the same. After the man refused to fess up to his mistake, Harlow clapped back one more time to drill her point in. She also later took to her Instagram story to deny that she had nudes out and to call the man an “idiot.” 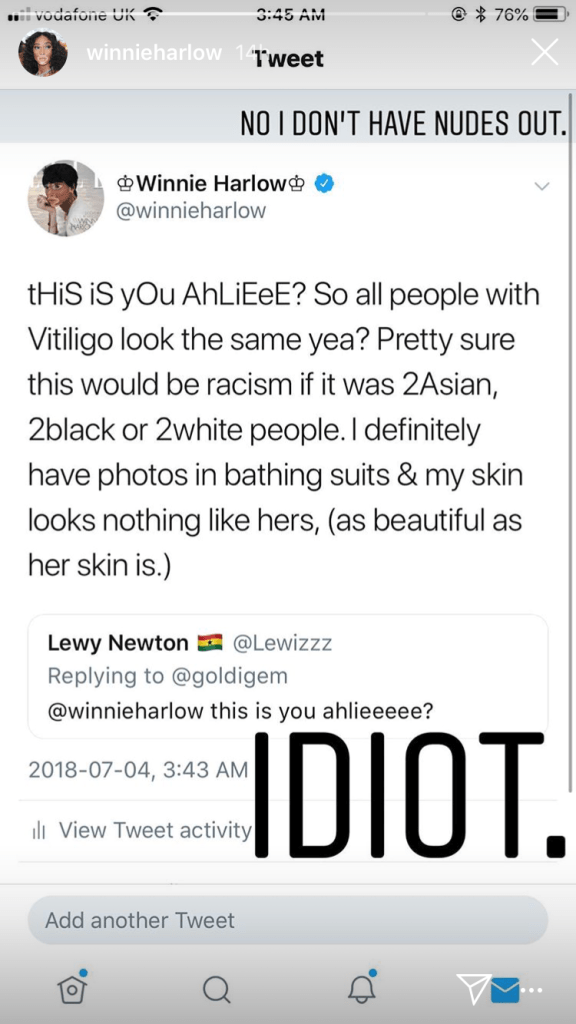 Harlow is right. To assume that another vitiligo woman’s nudes were hers simply because they have the same skin condition is ignorant and insulting. We hope that the man learns from his mistake and doesn’t make a dumb assumption like that again. Props to Harlow for putting him in his place.