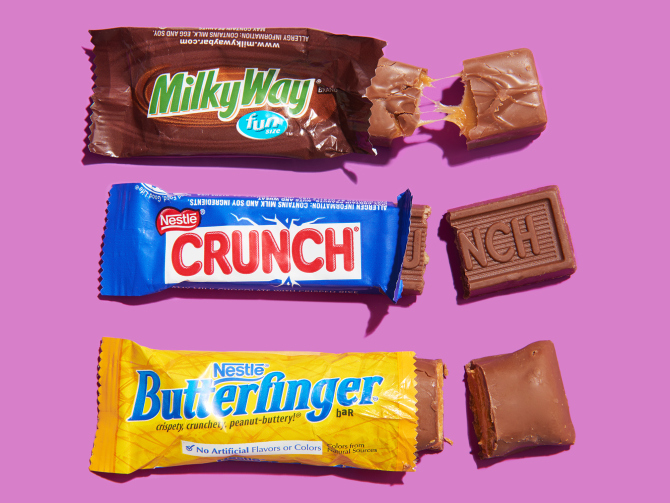 Halloween falls on a Saturday this year, which means there’s a (very) good chance you’ll be downing some vino along with those gummi bears, Almond Joys, and Kit Kats. It might sound silly to think about which wine to pair with which drugstore candy, but Alyssa Rapp, founder of The Daily Sip, swears it’s worthwhile.

Read on to see Rapp’s picks for the wine that’ll make your sweets that much better.

When it comes to classic chocolate, the intensity of your wine’s tannin should match your cocoa. Simple milk chocolate Hershey’s? Think merlot, Rapp says. “Duckhorn’s second label, known as Decoy, makes a stellar one and it clocks in at $25 per bottle,” she said.

Dark chocolate or heavy cocoa and toffee bars like those made by Ghirardelli call for a classic California cabernet sauvignon. “Cannonball offers a great cab—and are available at Whole Foods nationwide for only $15,” said Rapp.

If you didn’t love Almond Joy as a kid, you probably do as an adult—these guys have a way of growing on you. Not only is the coconut a good excuse for “healthy” Halloween-ing, it also pairs perfectly with a sweet French dessert wine like Barton & Guestier’s Sauternes, said Rapp, which costs around $20.

Sweet wine also works with chewy candy corn. “The kernels pack some sugar, so look to match or exceed in sweetness. Barro’s Tawny Port, for instance, is a great bet,” said Rapp.

If you’re going a traditional route and plan to eat classic candy apples (or anything caramel-based) look for rich, buttery chardonnays. Rapp suggests quintessential California varieties—French oak barrels, vanilla notes and hints of cream. “We dig the creamy vanilla texture of the MacMurray Ranch Chardonnay from Russian River Valley,” she says. This wine ranges between $13 and $16.

If you’re going to be popping colorful sugary candy—think Sour Patch Kids—reach for pinot grigio. The floral, aromatic notes of the wine surprisingly stand up to the tangy, zesty candies. Rapp suggests Seghesio’s pinot, which will run you about $20 a bottle.