Hollywood’s biggest night took an unexpected turn this year. A fight between Will Smith and Chris Rock broke out on national television after the Saturday Night Live alum made a distasteful joke about Will’s wife, Jada Pinkett Smith, during the 94th Annual Academy Awards.

During the live broadcast, which aired on March 27, 2022, Chris made a comment about Jada being “G.I. Jane,” seemingly in reference to her shaved head. After the comment was made, Jada could be seen visibly upset by it and rolling her eyes. Will initially laughed at the joke, but within moments, he could be seen running up on stage to slap Chris across the face. Although the live broadcast quickly began to censor out the ensuing exchange between Will and Chris, uncensored footage that aired internationally revealed what was really said between the actors. “Will Smith just smacked the shit out of me,” Chris said in disbelief. From afar, Will could be heard yelling at the comedian to not speak about Jada. “Keep my wife’s name out of your f—king mouth,” he screamed, twice.

According to Vanity Fair senior correspondent Rebecca Ford, actor Denzel Washington “pulled Will aside to talk to him” after his attack on Chris. Ford went on to reveal that Denzel also went over to comfort Jada. “Denzel now has his arm around Jada and is kneeling next to her even though the show has started,” Ford added in a tweet.

But what really happened between the pair to cause such a response from Will? Keep on reading below for the real reason behind Chris and Will’s fight at the 2022 Oscars.

What happened with Will Smith and Chris Rock at the Oscars? 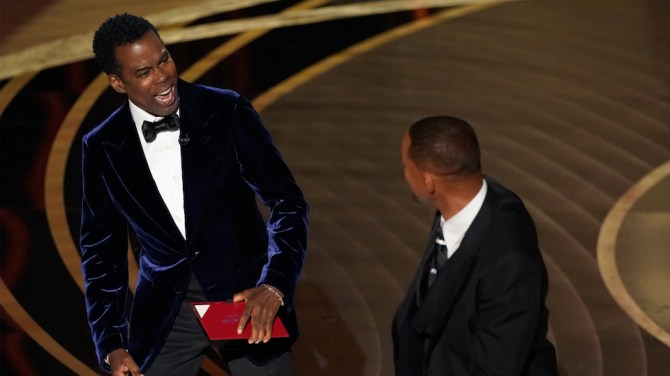 While Chris insisted his comment was only a joke, it’s not surprising that the Smiths considered it to be in bad taste. Jada has spoken out at length about her struggles with hair loss, opening up about her experience for the first time in 2018 during an episode of her Facebook Watch series, Red Table Talk. “It was terrifying when it first started,” Jada said at the time. “I was in the shower one day and had just handfuls of hair in my hands and I was just like, oh my god, am I going bald?”

Will’s wife later learned that her condition was known as alopecia, which causes sudden hair loss in patches and can result in full baldness. After hiding her scalp under turbans for months, Jada made the bold decision to shave her head after being inspired by her daughter, Willow. The pair shared a selfie to Instagram in July 2021, which Jada captioned, “Willow made me do it because it was time to let go, BUT…my 50s are ’bout to be divinely lit with this shed.”

Despite Jada’s public battle with her condition, Chris chose to make light of the situation at the Oscars. Understandably, Will didn’t take kindly to the comedian making fun of his wife on live television—hence the jaw-dropping smack for everyone to see.