Smith, 53, issued a lengthy statement on March 28, 2022, where he apologized for striking Rock, 57, while the comedian was on stage presenting the Academy Award for Best Documentary at the 2022 Oscars. “Violence in all of its forms is poisonous and destructive. My behavior at last night’s Academy Awards was unacceptable and inexcusable,” Smith’s statement began. “Jokes at my expense are a part of the job, but a joke about Jada’s medical condition was too much for me to bear and I reacted emotionally.”

He went on to issue a mea culpa to Rock directly, after initially snubbing the comedian from an apology during the awards ceremony. “I would like to publicly apologize to you, Chris. I was out of line and I was wrong. I am embarrassed and my actions were not indicative of the man I want to be,” he wrote. “There is no place for violence in a world of love and kindness.”

Smith continued, “I would also like to apologize to the Academy, the producers of the show, all the attendees and everyone watching around the world. I would like to apologize to the Williams Family and my King Richard family,” Smith added, referring to the 2021 film which earned him his Oscar for Best Actor in a Leading Role for the part of Richard Williams. “I deeply regret that my behavior has stained what has been an otherwise gorgeous journey for all of us. I am a work in progress.”

Smith and Rock’s incident occurred live on Oscars Sunday, when the Saturday Night Live alum made a distasteful joke about Smith’s wife, Jada Pinkett Smith. “Jada, I love ya. G.I. Jane 2, can’t wait to see ya,” Rock said in part, making a comparison between Jada’s shaved head and actress Demi Moore’s buzz cut in the 1997 movie, G.I. Jane. Pinkett Smith, for her part, has gone public with her years-long struggle with alopecia, an autoimmune disorder that attacks hair follicles and can result in hair loss and balding. Pinkett Smith was visibly upset was Rock’s comment, rolling her eyes from her seat as he defended the joke.

Moments later, Smith sauntered onstage and smacked Rock across the face in front of the audience—and millions more watching around the world. Rock, visibly shocked, said, “Wow. Will Smith just smacked the shit out of me.” Back at his table, Smith repeatedly shouted at Rock to “Keep my wife’s name out of your f—ing mouth.” 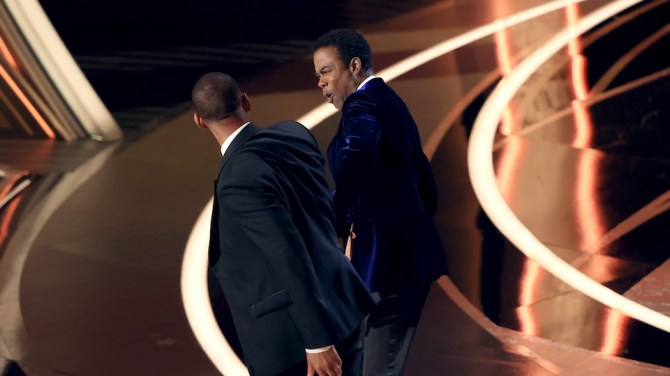 After shouting at Rock to keep his wife’s name out of his mouth, Smith initially issued an apology to everyone except the comedian while accepting his award for Best Actor. He began his speech with a reflection on his character, Richard Williams, the real-life father to tennis champions Venus and Serena Williams, whom he played in the 2021 film King Richard.

“Richard Williams was a fierce defender of his family,” Smith said. “In this time in my life, in this moment, I am overwhelmed by what God is calling on me to do and be in this world. Making this film, I got to protect Aunjanue Ellis, who is one of the most strongest, most delicate people I’ve ever met. I got to protect Saniyya [Sidney] and Demi [Singleton], the two actresses who played Venus and Serena.”

Smith went on to reveal that actor Denzel Washington counseled him following the incident with Rock. “Denzel said to me a few minutes ago, he said, ‘At your highest moment, be careful, that’s when the devil comes for you,’” seemingly referring to Rock’s comments. The Bright actor insisted that he wanted only to be “a vessel for love,” before thanking the Williams family for allowing him to be a part of their story.

“I want to apologize to the Academy. I want to apologize to all my fellow nominees,” he added as tears streamed down his face. “This is a beautiful moment and I’m not crying for winning an award. It’s not about winning an award for me. It’s about being able to shine a light on all of the people – Tim [White, producer] and Trevor [White, producer] and Zach [Baylin, writer] and Saniyya and Demi and Aunjanue and the entire cast and crew of King Richard, and Venus and Serena, the entire Williams family.”

He ended on a note about his character, saying, “Art imitates life. I look like the crazy father, just like they said about Richard Williams. But love will make you do crazy things,” before joking, “I hope the Academy invites me back.”