While the aerial photos from yesterday’s Women’s March on Washington show the half-a-million attendees filling streets and spilling out onto the lawns of the capital—a teeming blanket of pink and black, on the ground, with barely any cell service and sign-wielding marchers sandwiching you in from all sides—it was close to impossible to conceive just how far the crowd really went. What was clear, however, was the diversity of the people on the ground: families with three generations of women who had trekked from across the country, longtime activists rallying beside first-timers, mothers and fathers holding photos of their young daughters, and trans women banding together to demand a voice.

MORE: What Women (and Men) Wore to the March on Washington

The myriad faces in the pack were matched by innumerable reasons to take a stand, from the hyper-personal to the political (though at times like this, the two seem to be one and the same).

Read on for why 14 marchers decided to join the movement in Washington this weekend: 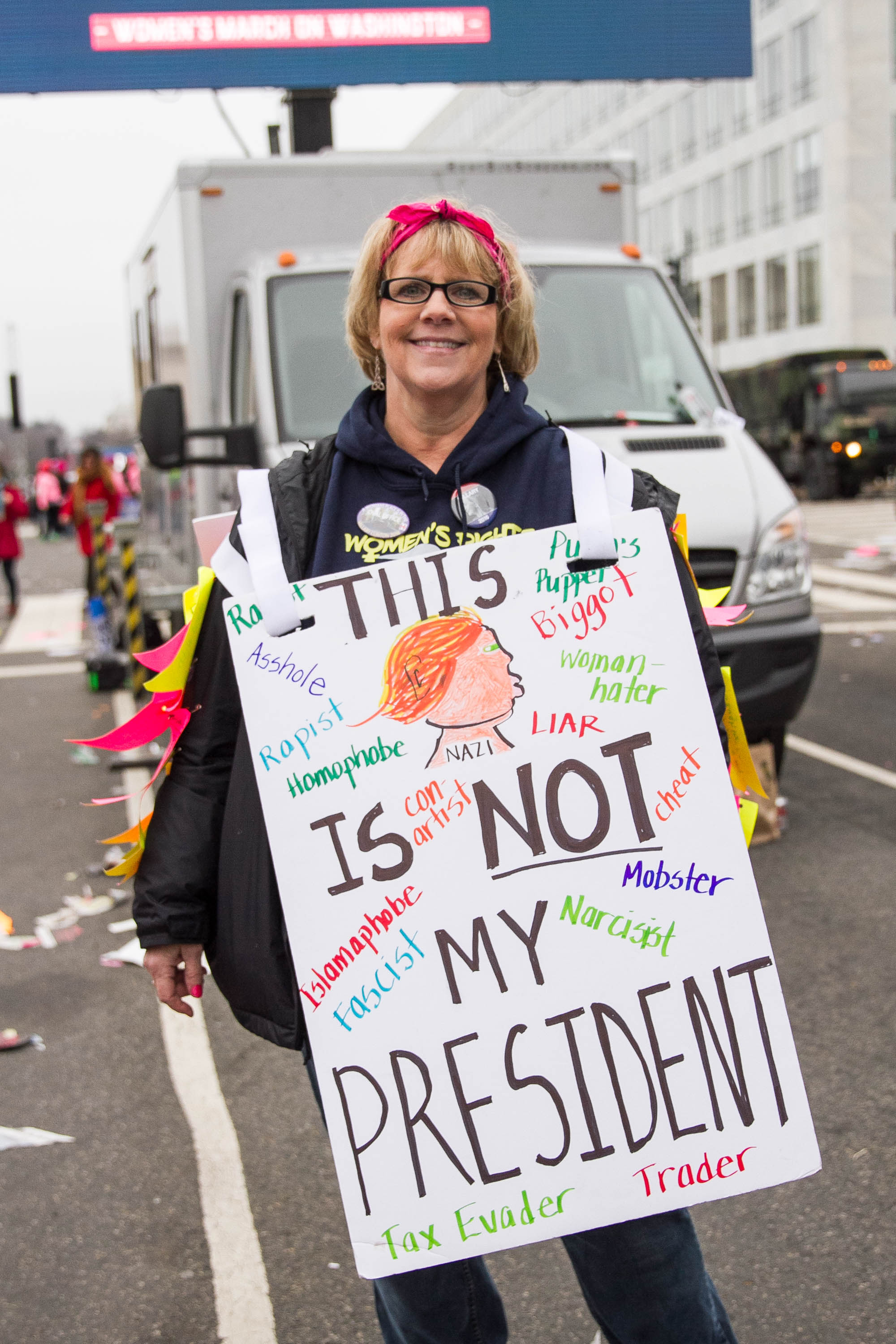 “I have three daughters that deserve to grow up with the same reproductive freedoms that I had. Two of my daughters are gay, and one of them is going out with an African-American Muslim woman, and she’s frightened, and that breaks my heart. This is not the America we should be living in.”

Can you tell me about your jacket and signs?

“These ribbons are the voices of the women who couldn’t attend—friends, coworkers, family members, Facebook friends. I offered to take their voices to Washington, so I’ve taken down what they wanted to say and posted them on my sleeve so they feel represented. There are so many issues that Donald Trump is attacking. I don’t really feel that he’s a legitimate president, and I don’t think he represents myself or the American people. We all spoke and we elected Hillary. And the back sign is about democracy—I really feel that our democracy is under attack, and we have to stand up like this and do something about it now.” 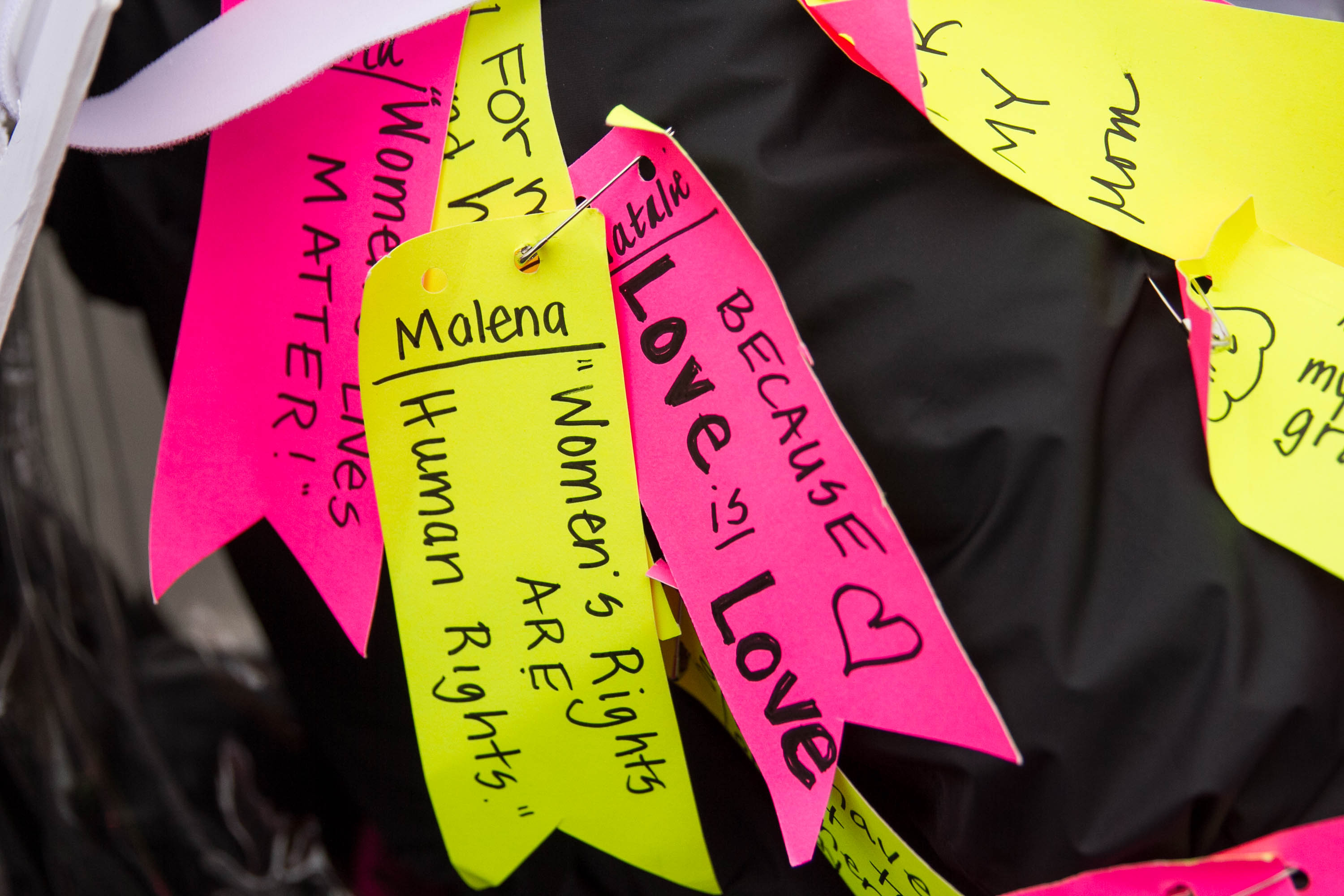 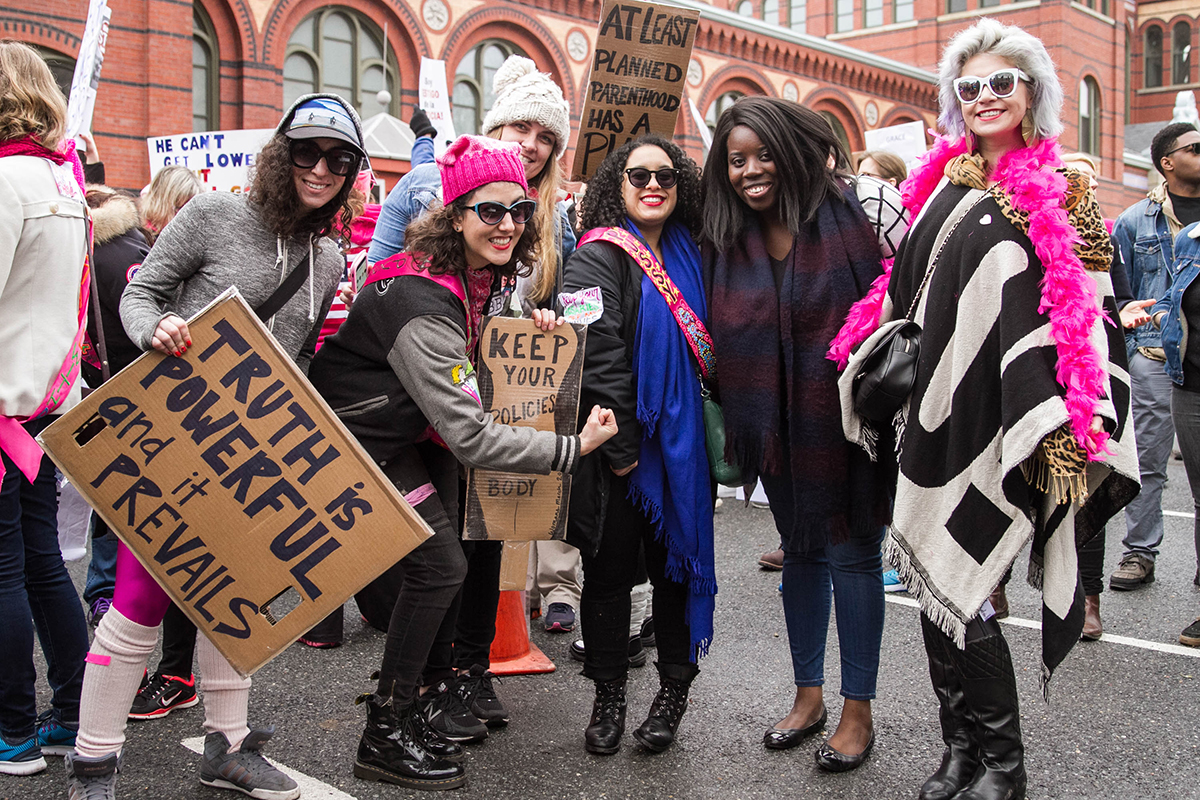 Courtney: “I bought a ticket the night of the election—I had a call to arms, in a way. I’m very active in the revolution [laughs]. I did a lot when it came to the Dakota Access Pipeline, and then Black Lives Matter, and reproductive rights. I’m hoping to get a sense of solidarity out of today. I plan on crying nonstop and feeling the witchy womanhood that is us. I hope these protests continue for the next four years.”

Elizabeth: “I wasn’t going to come to the march originally, but these two were like, ‘We’re coming to town and we want to go!’ And I thought about it, and I wasn’t going to go originally because I didn’t think it would make any difference, wouldn’t change anything, wouldn’t change the outcome. But really I think it’s about more than that—we get to see all the people who believe in the same things that we believe and will fight together to keep the things that we have and get the things that we want. It’s been tough on women and minorities and LGBT communities and everyone that isn’t in the majority, but it has ended up with more support for causes like Planned Parenthood and causes that we all care about, but don’t necessarily put our money where our mouth is, so hopefully we can keep the momentum going.” 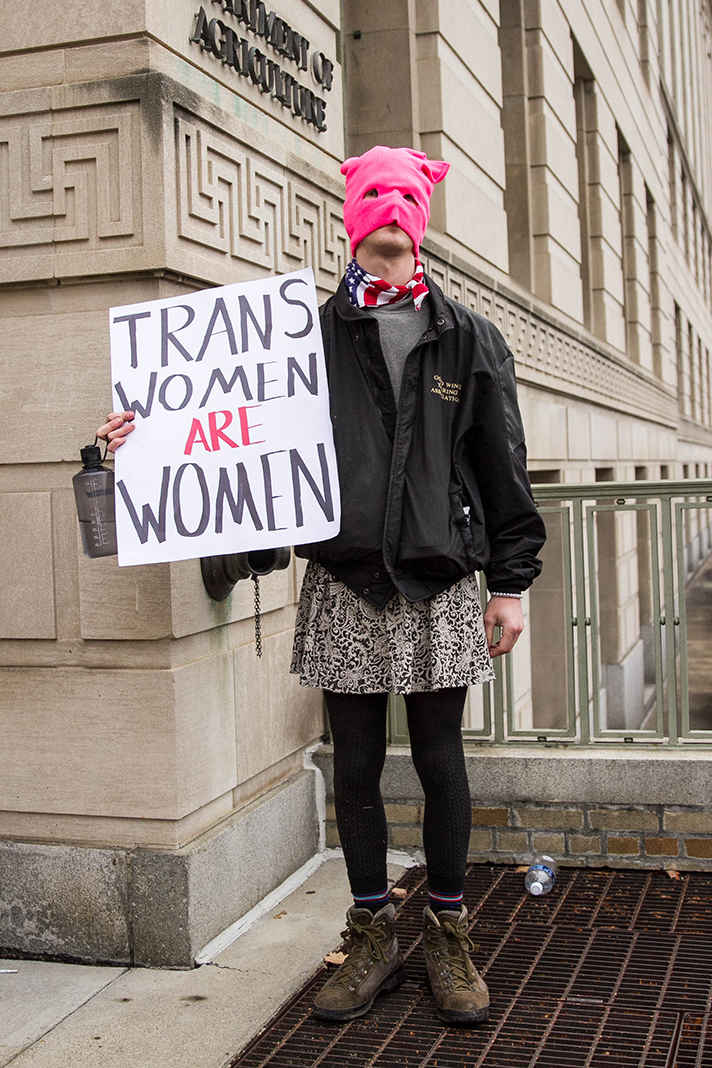 “I didn’t really decide to come to the parade until today. I am glad that everybody’s here, but also feel like there could be more representation for people other than white women. It’s very, like, Hillary Clinton feminism. I just hoped that people could branch out a little bit. I came here with that in mind and I’ve seen a lot of that, but a lot of the speakers were women of color, or trans women of color, so it’s a lot better than I thought.” 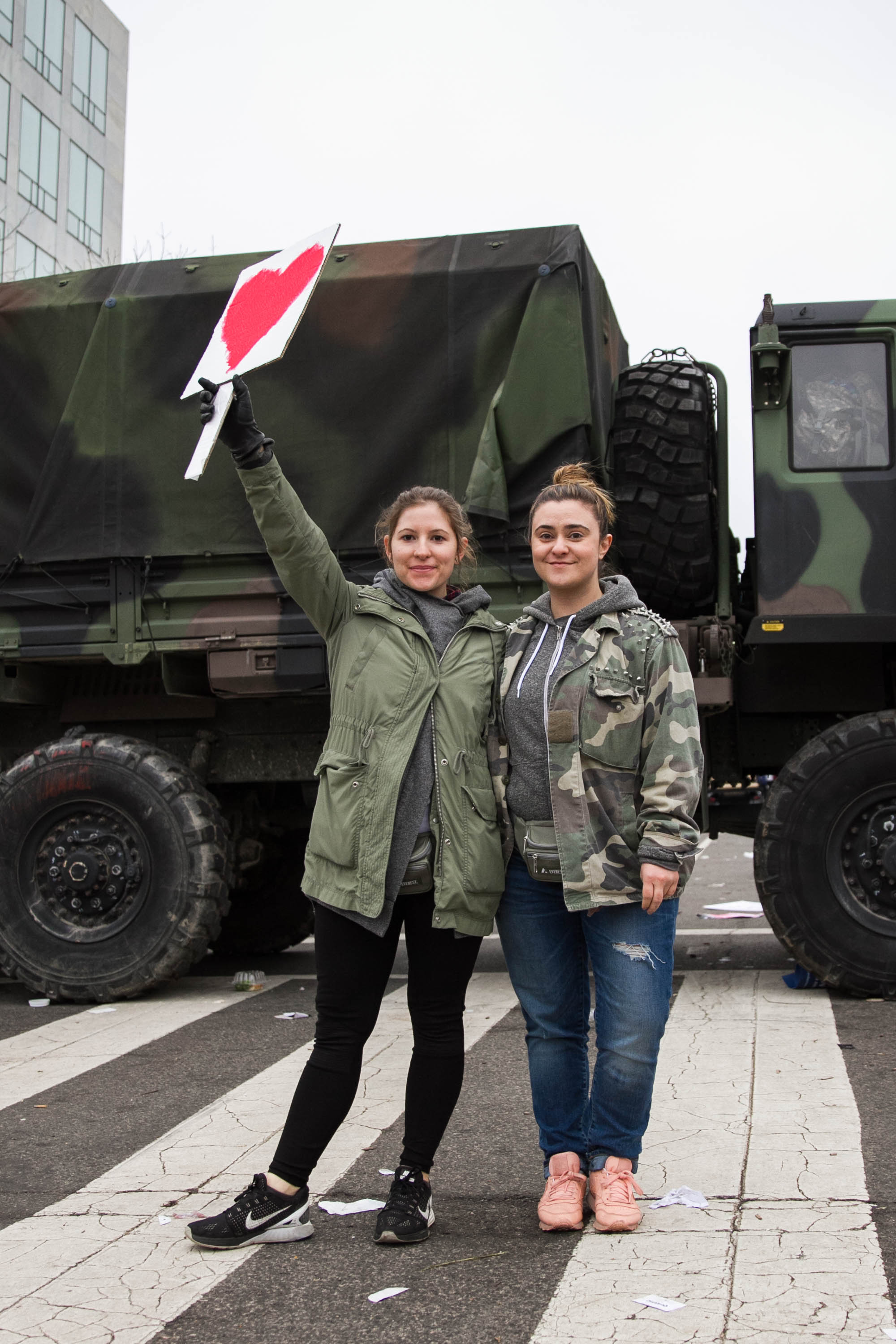 Erin: “We are here today to make some noise—but also spread some positivity with our heart sign. For me it’s definitely about reproductive rights, and also fighting against that nonsense that’s up there [gestures at group of counter-protestors with anti-Black Lives Matter and anti-gay signs].”

Nicole: “I’m here to fight for women’s reproductive rights. We decided to come a couple months ago. We came with her whole yoga studio—she’s training to be a yoga teacher—so the studio was like, ‘Let’s go and spread the love and be happy.'” 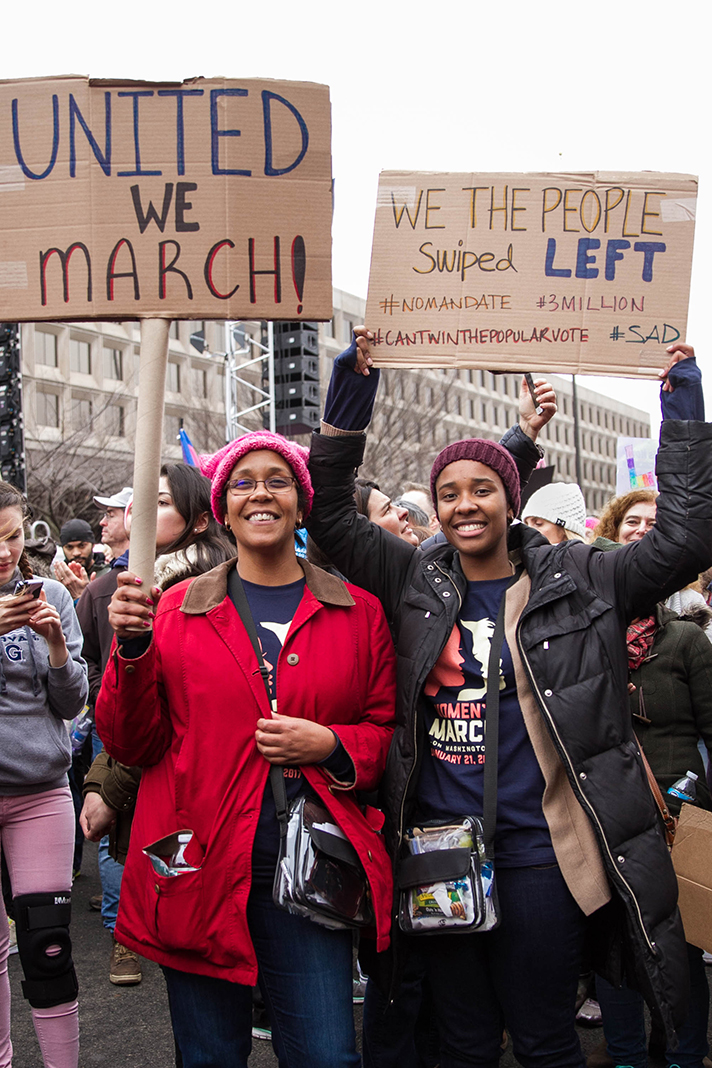 Amanda: “I feel like there’s been an attack on every segment of society, and before it was covert and now it’s blatantly obvious, and we need to stand up and fight back. I’m reading this book called “Dark Money,” which I suggest to everyone, about how there’s been a lot of funding of groups, a lot of changing society from what it was, of making “progressive” into a dirty word, and now it’s very clear that they are taking our rights away from us—healthcare, equal pay, rights for minorities. And it’s all out in the open. There’s a sign over there that calls Black Lives Matter protesters “rioters” and “thugs,” which everyone knows is a code word. It’s just unacceptable.

Melissa: “I completely agree with my daughter. I’ve never protested ever, so this is a first for me, but I just thought it was important to come out and really alert folks to what’s going on, and that we can do something about it if we stand together. People really need to wake up, and I think just by the crowds here, it says a lot of people are starting to take notice.”

So what are the next steps?

Amanda: “I’m a lawyer, so I’m organizing. I think getting involved locally is the biggest thing. They can’t run away from us—we’re their citizens.” 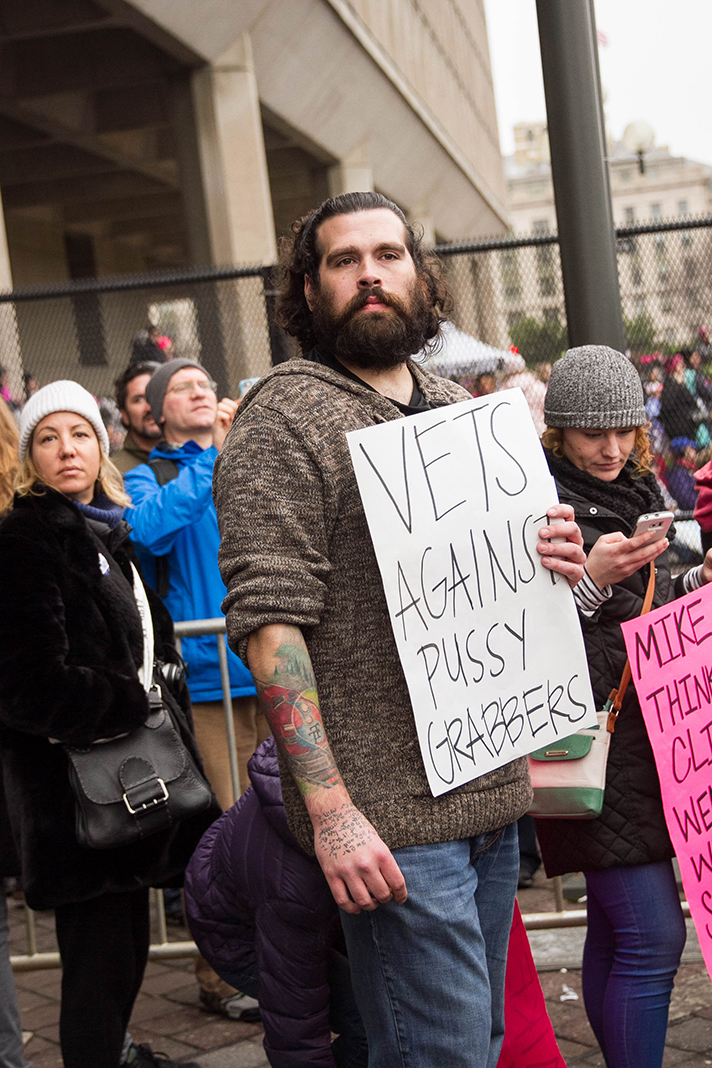 “I’m here because I’d like to believe that I fought for something more. I was in an Iraq campaigns in 2006-2007, and if I was willing to go over there when I was younger, I’d like to believe in what I was fighting for, and I can’t get behind the direction the country is going in right now. I came with my fiancée, Ashley—we took the train and drove—and I also wanted to come to break the stigma about vets that we’re very conservative. I don’t want to blanket people, but there’s a stigma, and I want to show that there are those of us that believe in equal rights for everybody, simply put.” 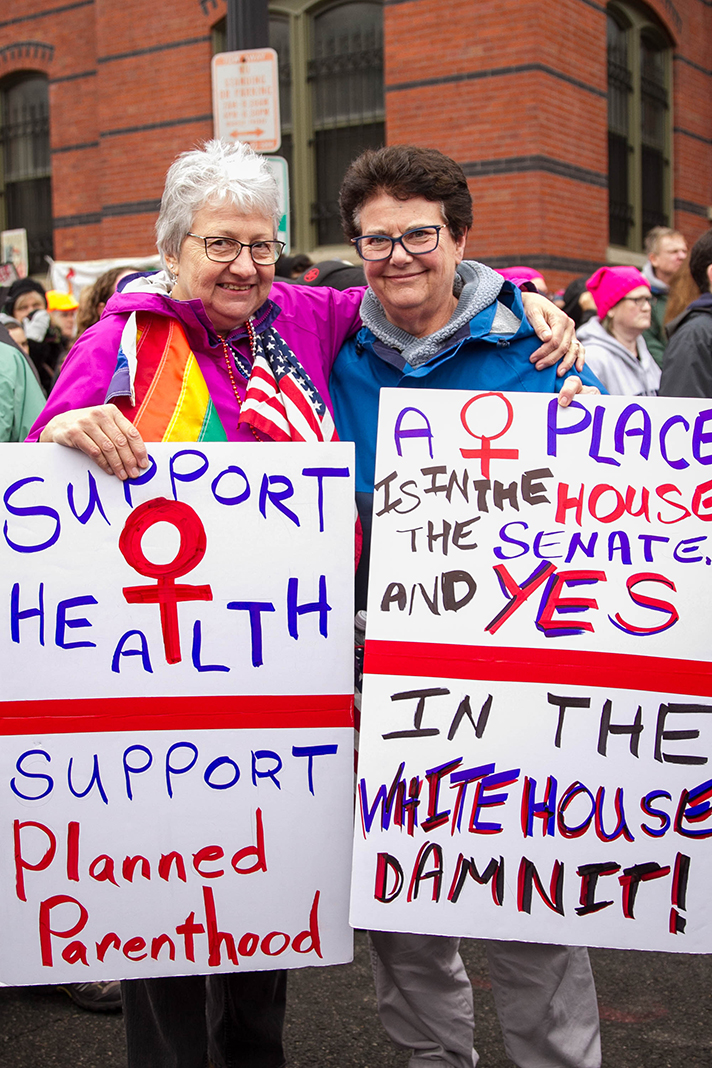 Judy: “We’re here to bring attention to the very poor president that we elected and to oppose him.”

Have you been to many marches and rallies like this in the past?

Judy: “Oh yes. We got married on the steps of the IRS with about 5,000 other gay couples—actually, we’ve gotten married three or four times, but that was one of them.”

Anne: “We go back to Civil Rights and we go back to Vietnam. This is fabulous. It’s great that people are marching at this time, right after the inauguration. It just shows right away that there are a lot of people out there that don’t support his policies. We decided to come way before the election, but I just didn’t think this would happen—it was really heartbreaking. I really thought in my lifetime I’d see a woman president, and Hillary was by far the most qualified.” 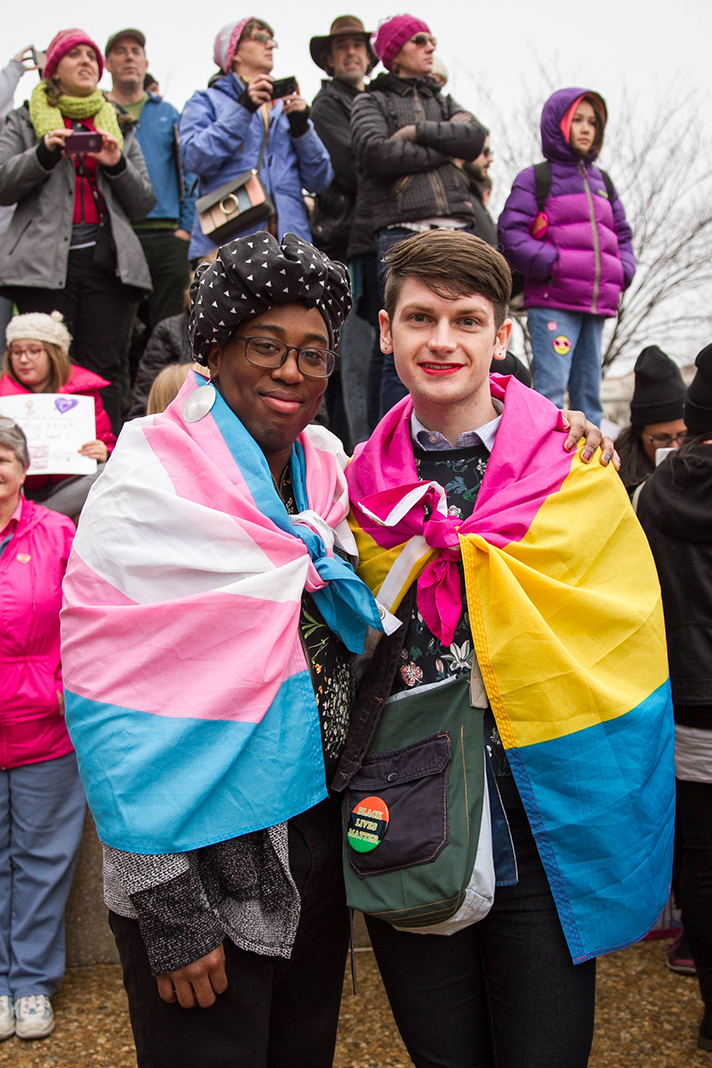 Stuart: “I think a really big thing is that this is trying to be intersectional, trying to include racial justice and economic justice, and just looking though the crowd, color was necessary to be here. I’ve been doing activist work for a few years now, but this is my first time doing it in Washington.”

Cuinn: “I guess I’m here because I’m queer? [laughs] And obviously this administration has very little support for many people of America, including myself. I first marched on Washington for the Iraq War, and I’m hoping that this leads to more activism, not just in the next four years, but just a movement of people being more active in their government and how things are run in our country.” 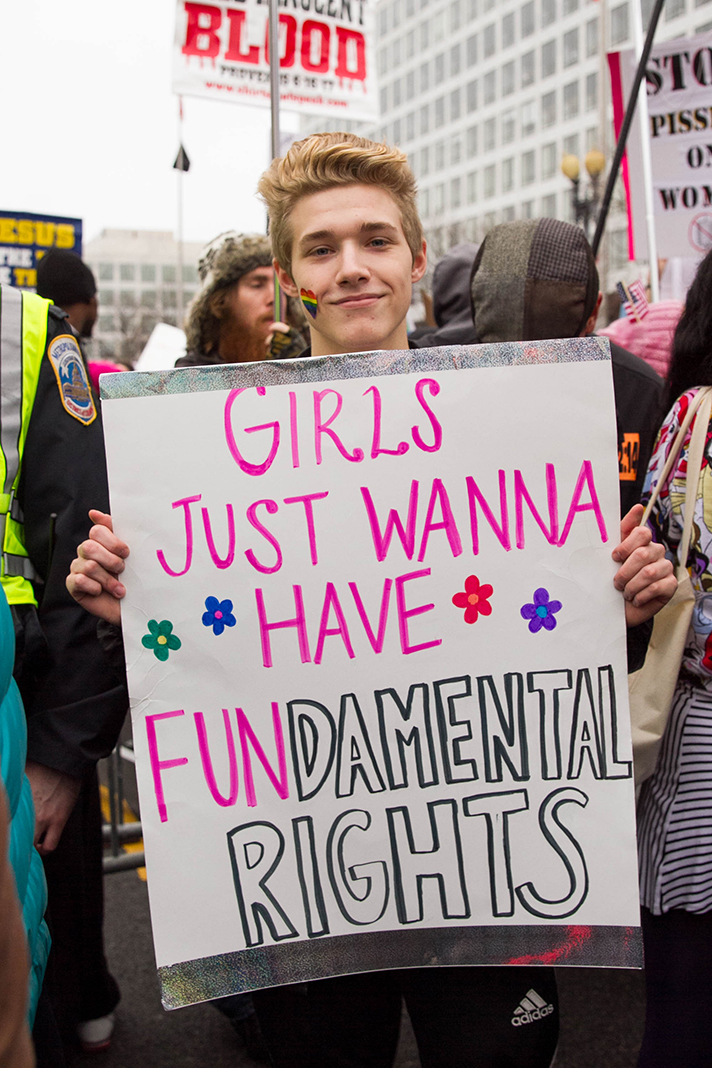 “I’m here to protest women’s rights—I decided to come last week with my friends from high school. I’m standing here [in front of anti-LGBT and anti-Black Lives Matter signs] because of these bigots behind me. I wanted to cover all that up. This is my first protest, but definitely not my last.”