If Peter Parker and Mary Jane Watson are still your OTP, you may want to know why Tobey Maguire and Kirsten Dunst broke up after the first Spider-Man movie and how Maguire was almost replaced as Spider-Man by Dunst’s next boyfriend, Jake Gyllenhaal.

Maguire and Dunst—who played love interests Peter Parker/Spider-Man and Mary Jane Watson in Sam Raimi’s Spider-Man trilogy—started dating while filming the first Spider-Man movie in 2001. James Franco, who played Harry Osborn in the Spider-Man movies, also confirmed that Dunst and Maguire dated while filming Spider-Man, which led to a rivalry between him and Maguire. “Tobey and Kirsten became a couple around that time,” he told Playboy in 2013. “I had a crush on Kirsten, and I think I was upset about that as well … Tobey was mad at me for a while. By the second film, we were cool.”

In an interview with The New York Times in 2021, MCU Spider-Man producer Amy Pascal revealed that she told Holland and Zendaya, as well as Garfield and Stone not to date each other after Maguire and Dunst’s breakup in the middle of the Spider-Man movies. “I took Tom and Zendaya aside, separately, when we first cast them and gave them a lecture. Don’t go there—just don’t. Try not to,” she said. “I gave the same advice to Andrew and Emma. It can just complicate things, you know? And they all ignored me.” 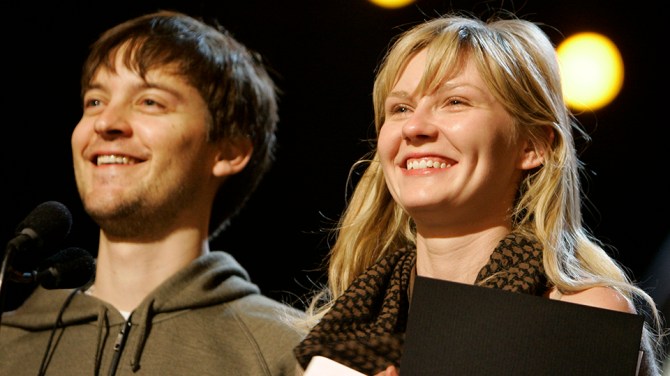 Why did Tobey Maguire and Kirsten Dunst break up?

Why did Tobey Maguire and Kirsten Dunst break up? Maguire and Dunst started dating while filming the first Spider-Man movie in 2001 but broke up before production started on Spider-Man 2 in 2002. Their relationship was such a secret that Spider-Man director Sam Raimi didn’t even know about it. “They apparently began dating with each other, I think, in the middle of the first movie … although I didn’t know it at the time,” he told the Sydney Morning Herald in 2007. “I actually had some worries about [their breakup],”

Raimi confessed he had concerns Maguire and Dunst’s breakup would affect their “chemistry” in the second and third Spider-Man movies. “Definitely they eventually broke up before the second movie,” he said. “I was concerned they wouldn’t get the same chemistry back, but it was just me worrying.” He continued, “They really like each other, I think, very much. And that relationship probably just added to their ability to trust each other.” In an interview for Spider-Man 3 in 2007, Dunst also confirmed that she and Maguire didn’t have issues playing love interests after their breakup. “We can wink at each other and have a camaraderie that’s, you know, stronger over the course of three movies,” she said.

So why did Tobey Maguire and Kirsten Dunst break up? Though neither Maguire nor Dunst have confirmed the reason for their split, Dunst hinted in an interview with The Independent in 2021 that the pay disparity between her and Maguire in the Spider-Man movies made her rethink her role in the franchise. “The pay disparity between me and Spider-Man was very extreme,” she said. “I didn’t even think about it. I was just like, ‘Oh yeah, Tobey is playing Spider-Man.’ But you know who was on the cover of the second Spider-Man poster? Spider-Man and me.”

According to Variety, Maguire was almost fired after the first Spider-Man movie and was almost recast by Jake Gyllenhaal, who dated Dunst after her breakup with Maguire. Variety reported that there was drama between Maguire and Columbia Pictures, the studio behind the Spider-Man movies, after Maguire learned that he was paid $4 million for the first Spider-Man movie, while producer Laura Ziskin made more than $30 million. According to Variety, Columbia Pictures didn’t think Maguire showed enough gratitude during the pre-production of Spider-Man 2, while Maguire had ill will toward Ziskin.

The magazine also reported that Maguire had reported back problems, which he used as a threat as part of his negotiations to earn more money for Spider-Man 2. Maguire’s behavior on set led Columbia Pictures to tell him that he had been recast in the role of Peter Parker/Spider-Man in Spider-Man 2 due to how much time and money he had cost the studio his his demands. According to Variety, Columbia Pictures had made an offer to Jake Gyllenhaal—who was dating Maguire’s ex-girlfriend and Spider-Man co-star, Kirsten Dunst at the time—to replace Maguire as Spider-Man, and negotiations had started. (All three actors also had managers at Management 360, which caused even more drama.)

In the end, Maguire’s team was able to keep him as Spider-Man and negotiate a deal that paid him $7.5 million for Spider-Man 2 and five percent of the movie’s box office gross. Variety also reported that Maguire agreed to take medical tests to prove that he was physically fit enough for Spider-Man, after Columbia Pictures used his past reports of back problems against him. Gyllenhaal—who went on to play Mysterio in 2019’s Spider-Man: No Way Home—split from Dunst in 2004 after the release of Spider-Man 2.

A source told People at the time that Maguire and Meyer split simply because they had grown apart. “They’ve been living separate lives for a while,” an insider said at the time. “They have completely different interests and haven’t seemed to be connecting.” Differences in their lifestyle may have also been the reason for their separation. “He’s extremely private and prefers to stay home, and she’s very social and has tons of girlfriends,” the source explains. “They haven’t been happy together for a long time,” the source said. “But they are great parents and they love their children.” A second insider also confirmed that Maguire and Meyer will continue to be co-parents. “It’s a marriage that’s ending, but a bond and a family as strong as any I know. They’re remarkable people. And very supportive of each other,” the source said.