Since I Love Lucy ended, there have been a lot of questions about why Lucille Ball and Desi Arnaz divorced and where they stood before their deaths three years apart from each other.

Ball and Arnaz met and fell in love in 1940 after starring in the movie, Too Many Girls. They married that same year on November 30.In 1948, Ball was cast as Liz Cooper, a wacky wife in the CBS Radio comedy show, My Favorite Husband. The show ran for 148 episodes. After the success of My Favorite Husband, Ball was asked by CBS to develop it for television, which she agreed if she could work with her real-life husband, Arnaz. Unimpressed by the pilot episode, CBS turned down a show with Ball and Arnaz, which led them to hit the road as a vaudeville act in which Ball played a zany housewife who tried to get into her husband’s show. After the success of the tour, CBS greenlit I Love Lucy, which went on to run for more than 100 episodes and be one of the most-watched shows in TV history. Throughout the series, Ball and Arnaz also welcomed two children: daughter Lucie Arnaz, who was born in 1951, and son Desi Jr. Arnaz, who was born in 1953.

After 20 years of marriage and multiple I Love Lucy spinoffs, Ball and Arnaz divorced in 1960. The story of their relationship was told in Amy Poehler’s 2022 documentary, Lucy and Desi, which dove into who Ball and Arnaz were as people in addition to Hollywood stars. “I knew about them as performers, not as people,” Poehler told Variety in 2021. “These two incredible outsiders worked hard to become powerful, influential figures at a time when women and immigrants were not running the system. But at the end of the day, the attempt was to tell a love story: Their long journey of falling in love, working, and staying in love with each other through thick and thin was echoed in their show.” Poehler continued, “And then to watch America’s most powerful couple — they created the idea of a power couple — split up after being on TV, as this example of how things will always be OK, it was interesting. So much is made of their work and comedy, and it should be. But I also think it is also an equal triumph to have a relationship that was the kind that they had. It is hard to maintain a working relationship, as well as a relationship with someone you love and is your partner in raising kids.”

So why did Lucille Ball and Desi Arnaz divorce? Read on for the drama that led to Ball and Arnaz‘s split after I Love Lucy ended and where they stood before their deaths. 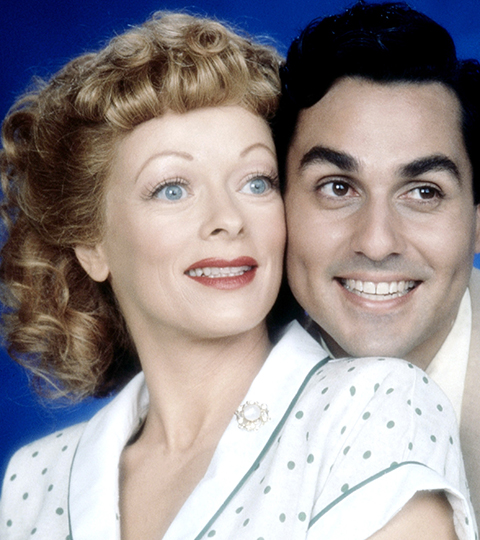 Why did Lucille Ball and Desi Arnaz divorce?

Why did Lucille Ball and Desi Arnaz divorce? Ball first filed for divorce from Arnaz in 1944 after four years of marriage. In her 1989 memoir, Love, Lucy, Ball revealed that she filed for divorce from Arnaz due to his drinking problem and alleged infidelity. “Desi’s nightlife had even blasé Hollywood talking,” she wrote. “Confidential Magazine published a story about a Palm Springs weekend of his, and this too hurt and humiliated me deeply. … During the summer of 1944, Desi stopped coming home.”

Ball and Arnaz went on to reconcile before Ball filed for divorce a second and final time in 1960. In the 1993 book Desilu
, Ball is quoted comparing Arnaz to “Jekyll and Hyde” to the court in their divorce heaing. “He drank and he gambled, and he went around with other women,” she said, according to the book. “It was always the same — booze and broads. I’d seen it coming. I was always hoping things would change. But Desi’s nature is destructive.” She continued, “My husband would frequently have temper outbursts in front of the children, and this was very bad. It was so bad I thought it would be better if we were apart. It was sort of a Jekyll and Hyde sort of thing. He would have tantrums in front of friends and relatives, and we could have no social life for the last three to four years.” At the time of her divorce, Ball also told the court that her marriage to Arnaz had been “a nightmare for the last three years.” I Dream of Jeannie star Barbara Eden also confirmed Arnaz’s infidelity in her 2012 memoir Jeannie Out of the Bottle, where she recalled the time she guest starred on I Love Lucy in 1957.  “There was no doubt whatsoever that Desi Arnaz was a world-class philanderer,” she wrote. “It was common knowledge in Hollywood that he had a taste for young, curvaceous blondes and that Lucy was deeply unhappy about Desi’s infidelity.” According to Arnaz, who is also quoted in Desilu, the divorce was caused in part by how much time Ball and Arnaz spent together at home and at work on I Love Lucy. “I think one of the problems was that we were both working too hard and were together too much,” he told the court. “There was really no chance to be away from each other and let things cool off.”

In Arnaz’s 1976 memoir, A Book, the actor recalled how his and Ball’s marriage “deteriorated” in the months before their divorce. “The more our love life deteriorated, the more we fought, the less sex we had,” he wrote. “The more unhappy we were, the more I worked, and the more I drank. … At this point I hadn’t slept in the master bedroom for almost a year. … So I began to fill my needs elsewhere. And so did she.” Arnaz also recalled the moment he asked Ball for a divorce while at his office. “I followed her and as she stopped to have a drink, I told her, ‘Lucy, I want a divorce,’” he wrote. “She looked up at me, and those big blue eyes can express many emotions, the desire to kill not being the least of them.”

Arnaz wrote that Ball left his office without a response before he came home later that night and confronted him. “Her temper got the best of her,” Arnaz said, recalling that Ball asked him, “‘Why don’t you die then? That would be a better solution, better for the children, better for everybody. … I’ll tell you something, you bastard, you cheat, you drunken bum – I’ve got enough on you to hang you. By the time I get through with you, you’ll be as broke as when you got here.'” He continued, “I was about to light a cigarette when she came at me with a dueling pistol, pointed it at my face and pulled the trigger. I lit my cigarette on its flame. … I told her, ‘Look I know you didn’t mean everything you said, but for the sake of the children, let’s try to make this as amicable as possible’.” Arnaz also explained in the book that his and Ball’s professional relationship had driven them apart as their “personal lives” became “so miserable.”

In the book, Arnaz also claimed that he told Ball that she should be the one to file for divorce and not him, so that she could keep up her public appearance. “We’ll get a good lawyer for you and you’ll be the one to sue for divorce,” Arnaz recalled telling Ball. “We will have no trouble arriving at a fair financial settlement and all that other stuff, but please, don’t ever threaten me again.” He continued, “We never lived together under the same roof after that night.” Two years after their divorce, Ball also bought out Arnaz to own the majority stake of their production company, DesiLu, which they founded in 1950. Ball later sold her shares of DesiLu to Gulf + Western (later Paramount Television) for $17 million (a value of $132 million in 2020 in 1968.

After their divorce, Ball remarried with comedian Gary Morton from 1961 until her death in 1989. Arnaz, for his part, remarried with his neighbor, Edith Hirsch, 1963 until his death in 1985. Despite their dramatic divorce, Arnaz and Ball remained friends until their deaths. In his memoir, A Book, Arnaz wrote of Ball: “All I can say is that I loved her very much and, in my own peculiar way, I will always love her.”

According to DesiLu: The Story of Lucille Ball and Desi Arnaz
, Arnaz and Ball had their last conversation two days before he died. Their final phone call was on what would’ve been their 46th wedding anniversary, November 30, 1989. “I just shut the door and let them have their time together,” their daughter, Lucie Arnaz, said in the book. “I started them off, like two kids on a first date.” According to Lucie, Arnaz’s last words to Ball were to say he loved her and he wished her well with an upcoming television appearance. Lucie also told the book’s writers that she had to hold the phone to her father’s ear for him because he had become so weak. “I had to hold the phone,” she said.. “I couldn’t get out of the room. And he said, ‘I love you, too, honey. Good luck with your show.’”

After his death, Arnaz was cremated and his ashes were scattered. His funeral was held at Solana Beach, California, on December 4, 1986, according to the Associated Press. The publication reported that 100 people attended the private service, including Ball, who was seen weeping. During the funeral, Ball remembered Arnaz as a “great, great showman.” ″Just look at the stuff he’s done over the years,″ she sad. ″It’s on three or four times every day. He was a great part of our innovation in this business.″