Over before it began. Since their split, fans have been curious to know why Kanye West and Julia Fox broke up and if it had anything to do with his recent Instagram posts about Kim Kardashian and Pete Davidson.

Kanye and Julia started dating in January 2022 after they met at New Year’s Eve party in Miami, Florida. “I met Ye in Miami on New Year’s Eve and it was an instant connection. His energy is so fun to be around,” Julia wrote in an article for Interview magazine at the time. “He had me and my friends laughing, dancing, and smiling all night. We decided to keep the energy going and fly back to New York City to see Slave Play. Ye’s flight landed at six and the play was at seven and he was there ON TIME. I was impressed. After the play we chose to do dinner at Carbone which is one of my favorite restaurants. Obviously.”

She continued, “At the restaurant, Ye directed an entire photo shoot for me while people dined! The whole restaurant loved it and cheered us on while it was happening. After dinner Ye had a surprise for me. I mean, I’m still in shock. Ye had an entire hotel suite full of clothes. It was every girl’s dream come true. It felt like a real Cinderella moment. I don’t know how he did it, or how he got all of it there in time. But I was so surprised. Like, who does things like this on a second date? Or any date! Everything with us has been so organic. I don’t know where things are headed but if this is any indication of the future I’m loving the ride.”

They made their red carpet debut as a couple later that month at Paris Fashion Week. In an interview on the “Call Her Daddy” podcast in February 2022, Julia revealed that she isn’t jealous of Kim, who filed for divorce from Kanye in February 2021. (The two share four kids: North, Saint, Chicago and Psalm.) “I’m sure there’s still some sort of residual feelings,” Julia said at the time. “It’s normal, it’s human, but I also know that he’s with me now and that’s all that matters.”

Kanye and Julia‘s relationship ended in February 2022 after news broke that they had split after two months. So why did Kanye West and Julia Fox break up? Read on for what we know. 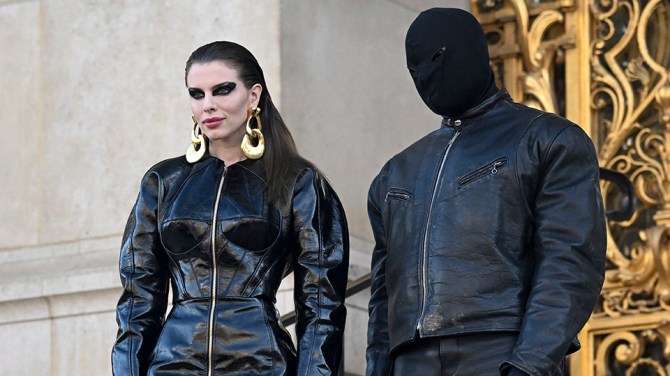 Why did Kanye West and Julia Fox break up?

Why did Kanye West and Julia Fox break up? Julia confirmed her breakup from Kanye on Valentine’s Day, February 14, 2022. The split came two months after they met in Miami, Florida, New Year’s Eve 2021. “Julia and Kanye remain good friends and collaborators but they are no longer together,” a rep for Julia said in a statement at the time. Julia also confirmed the split in a since-deleted post on her Instagram Story, in which she noted that she has love for Kanye but wasn’t in love with him.

“Y’all would love if I was soooo upset! The media would love to paint a picture of me a sad lonely woman crying on a plane by myself but it’s NOT TRUE!! Why not see me for what I am which is a #1 hustler. I came up yall lol and not only that but Kanye and I are on good terms! I have love for him but I wasn’t in love w the man Jesus Christ what do u guys think I am 12 years old?!” she wrote. She also responded to a report claiming she was seen crying at an airport over the split. “and for the record the only time I cried in 2022 was on Feb 6th on my dead BFF bday. Anyway If u want the full tea ur gonna have to buy the book when it comes out :)” she wrote.

So…why did Why did Kanye West and Julia Fox break up? Well, a source told People on February 11, 2022, that “distance” was an issue in their relationship. “Kanye and Julia both have separate busy lives. Julia lives in New York City and Kanye has been in Los Angeles. The distance makes it hard,” the insider said. “They are still in touch and will see each other when they can. Kanye really likes her. It’s fair to say that they have cooled off a bit, though.” However, a source told Hollywood Life on February 14, 2022, that Julia ended her relationship with Kanye after his recent Instagram posts about Kim Kardashian and Pete Davidson, in which he called his ex-wife’s boyfriend a “dickhead.”

“Julia has had enough drama in past relationships, and the last thing she needs is more. Julia really likes Kanye, but when he acts out like this with these public outbursts, it’s hard for her not to feel some type of way. She doesn’t want drama with any relationship, be that Kanye or anybody else she dates,” the insider said.

The source continued, “She knows there’s been stuff in the press about Kanye’s rants or whatever, but she wanted to get to know Kanye for himself. Not for what everybody reads in the papers. She was smitten and who wouldn’t be? He made her feel totally special and like a princess in every way. But if he’s reverting back to his old ways, she wants none of it and wants to disassociate herself from him when he’s like that.”

Kanye and Julia’s split came after he slammed Pete in an Instagram post and claimed the comedian dated Hilary Clinton. “LOOK AT THIS D–KHEAD,” Kanye captioned a since-deleted photo of Pete and Kim on his Instagram. “I WONDER IF INSTAGRAM GONNA SHUT DOWN MY PAGE FOR DISSING HILARY CLINTON’S EX BOYFRIEND.” In another Instagram post from Super Bowl weekend, Kanye accused Pete of trying to “destroy” his family and claimed that he has “faith” he and Kim will be “back together” again.

A source told Page Six in February 2022 that Julia—who split from her husband Peter Artemiev (with whom she shares son Valentino) in 2020—”understands” Kanye’s divorce drama with Kim. “Julia’s been in the same predicament, so she understands that divorces are messy and when kids are involved it makes it almost impossible,” the insider said. “She just wants them to resolve their issues.”