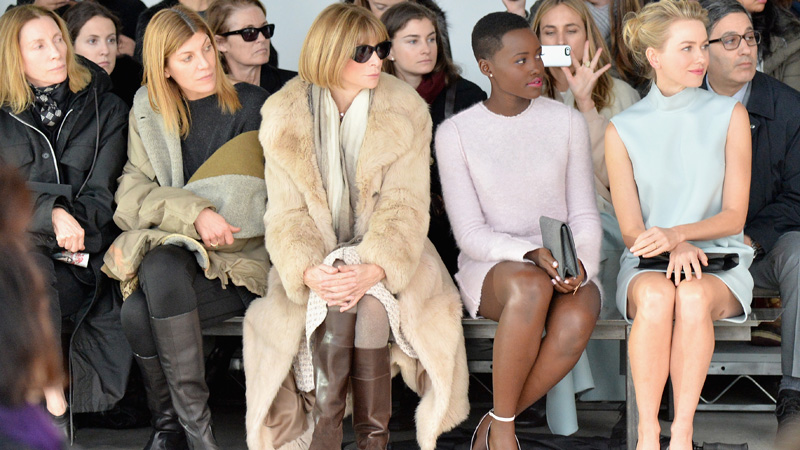 Most women would kill for a front-row seat at a major fashion show, but celebrities aren’t just given that privilege—they’re often getting paid for it. It’s one of those backdoor practices in fashion that brands notoriously shy away from talking about, but the fact remains that attending a 15-minute runway show can mean up to a six-figure payday for the right star.

With Fashion Week kicking off this week in New York City, just how much will stars in the front row be raking in? The Sun reported last year that Rihanna was paid around $100,000 to attend Karl Lagerfeld’s fall 2012 show in Paris. Then there’s the often-cited rumor that Jessica Chastain was paid $800,000 to do photo ops at an Armani Privé show (though insiders speculate it was more like $80,000).

Fashionista.com published a fee list in 2010, with experts weighing in that Beyoncé can receive up to $100,000 for a front-row perch, while a lower-level star like Leighton Meester would make somewhere around $40,000. Not all compensation is cold hard cash, though. Lily Allen famously admitted in 2007 that in exchange for attending a Saint Laurent show she was allowed to help herself to whatever she wanted in the brand’s flagship store—a dream scenario for most women. Naturally, a star’s value is constantly evolving—someone like Lindsay Lohan, for example, once commanded five-figures for a front-row appearance now isn’t even wanted for free.

MORE: How It’s Decided Who Sits Where at Fashion Week

Lori Levine, the Founder and CEO of celebrity wrangling firm Flying Television—a pioneer when it comes to bringing corporate America and celebrities together—says that the common practice of paying stars to attend shows can ultimately be just as valuable to a fashion house, if not more so, than a flattering review in Women’s Wear Daily.

“The right celebrity at a show can be huge for a brand,” Levine said. “Fashion week has become so expensive, between putting together a show on location, producing samples—producing these shows can cost anywhere from $100,000 to $500,000. If you are going to spend that much money, a lot of times those budgets include funds to make sure celebrities attend.” Celebrities, in return, all but assure wall-to-wall press mentions for the brand in magazines, tabloids, and blogs, as well as generate much-needed social media buzz.

As for the labels most willing to shell out, Levine says it is often big-budget brands in need of a fashion edge. “The brands with a lot of money behind them, the big denim brands that aren’t necessarily big with fashionistas, brands that are new to the runway…You have to think about who you want buying your clothes and look at social media numbers,” said Levine.

And while A-listers like Rihanna and Chastain have made news for their rumored front-row fees, other celebrities already under contract for a brand (like Jennifer Lawrence for Christian Dior), probably already have it in their contracts that they have to attend a designer’s show. “If you are going to be in our campaign, you are going to sit front row at our show, wear our clothes on the red carpet, and go to our parties,” Levine shared of common terms in fashion and beauty campaign contracts.

However, most of the time, it’s the B-list stars with big social followings, who are the ones who really cash in because they’ll make the rounds to several shows throughout the week, as opposed to being exclusive to one brand. Still, there’s an even lower rung of celebrity who will go to shows for free, in the hopes of proving that they’re worthy of being paid down the line. “A handful girls [each season] are going to try shows for free, either with the hope that they are invited back to be paid, or just to make that push into fashion,” Levine said. “Even they, though, are having something covered like car services, hair and makeup, if actual cash isn’t being exchanged.”

Still, Levine points out there are plenty of big-name designers who aren’t paying anyone, and simply sending out invites. “Karl Lagerfeld’s Chanel show—everyone wants to be there, everyone wants sits front row. Marc Jacobs isn’t paying anyone. And celebrities love Zac Posen…he’s having a banner year.”

And then there are the designers who are against the practice simply on principle. London-based designer Nicole Farhi commented on the trend in The Telegraph saying: “It is so unprofessional. I have never paid a celebrity and I will never do it. It’s stupid.”

If you start to feel jaded and assume that every celebrity who shows up to Fashion Week is being paid to be there, rest assured that plenty of stars still come to support their fashion friends, particularly in the case of major movie stars, who don’t need to be paid to go to a fashion show. “When Demi Moore [shows up], she isn’t get paid, she’s coming because she is friends with a designer and wants to show her support,” Levine said.