Since their split, fans have wondered why Courteney Cox and David Arquette divorced and where they are now after starring in five Scream movies.

Courteney and David met on the set of 1996’s Scream, in which they played love interests Gale Weathers and Dewy Riley. We “fell in love on the first, hated each other on the second, got married right before the third and…what are you talking about, what’s wrong? Is there some news about us?” Courteney told ABC News in 2011. In an interview with People in 2009, David revealed that he and Courteney met at a pre-party before filming for Scream started. “We met at a pre-party before we started filming Scream. I was being a little cocky and Courteney was like, ‘Ah, I’ve heard of you,’ and we just kept flirting for a while. She’s just so gorgeous and she jokes around so much,” he said. He also confirmed that it wasn’t love at first sight for Courteney. “For me it was, but not for her. I had to trick her,” he said.

David proposed to Courteney after two years of dating in 1998. According to a People report at the time, David proposed to Courteney on a beach on the East Coast while they were on vacation. “Courteney Cox Arquette, will you marry me?” he said as fireworks blasted off a barge he had hired. Courteney said yes, and David presented her with a Victorian engagement ring. That was classic Courteney and David,” Scream director Wes Craven told People. “He did something so unabashed and so heartfelt, and she just went with it.” David and Courteney married in 1998 at a wedding in San Francisco attended by stars like Courteney’s Friends co-stars, Matthew Perry, Lisa Kudrow, Jennifer Aniston, David Schwimmer and Matt LeBlanc, as well as Aniston’s husband at the time, Brad Pitt, and David’s sister, Patricia Arquette.

In 2004, Courteney and David welcomed their first child together, a daughter named Coco. In an interview with The Daily Mail in 2008, Courteney claimed that “divorce” was “not an option” between her and David. “I get shocked by people getting divorced all the time, that’s why I choose to work on it. Therapy helps us,” she said at the time. “It’s so easy to grow apart; marriage takes work. I suppose you can work it out by talking to each other—I would just prefer to have a referee, it reminds us why we’re together.” Two years after the interview, Courteney and David announced their separation. They finalized their divorce three years after their announcement. So why did Courteney Cox and David Arquette divorce? Read on for the real reason behind their breakup and where they are now. 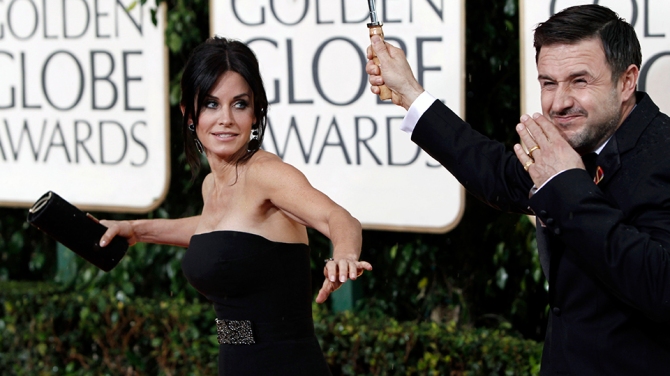 Why did Courteney Cox and David Arquette divorce?

Why did Courteney Cox and David Arquette divorce? Courteney and David announced their separation in October 2010 after more than 11 years of marriage. In a statement to People at the time, Courteney and David revealed that they had
“agreed to a trial separation that [dated] back for some time” before they decided to make their split official. “The reason for this separation is to better understand ourselves and the qualities we need in a partner and for our marriage,” the statement read. “We remain best friends and responsible parents to our daughter and we still love each other deeply. As we go though this process we are determined to use kindness and understanding to get through this together.” The statement continued, “We are comfortable with the boundaries that we have established for each other during this separation and we hope that our friends, family, fans and the media also show us respect, dignity, understanding and love at this time as well.”

In an interview with Howard Stern that same month, David confirmed that he was “not the one that called this [separation] in order.” “It breaks my heart,” he said. “I’ve been begging Courteney to get back with me. She’s conflicted too.” During the interview, David hinted that he and Courteney broke up because of how immature he was. “She said to me, ‘I don’t want to be your mother anymore,'” he said. “And I appreciated that about her … She didn’t want to tell me, ‘Don’t do that.’ She didn’t want to nag me anymore.”

Courteney, for her part, told Stern in April 2011 that she and David split due to their sexual differences. “It was early in the morning,” Courteney said of a time when he and David were at a Disneyworld hotel with their daughter, Coco. “This is one of our problems in our relationship. Whenever I would need consoling from David, he could not literally put his arm around me for one second without completely getting a boner.”

Courtney later clarified that David didn’t ask her for sex at that time. “[He] was never like, ‘Oh, I’m so sorry your Dad is dying. Can we fuck?'” she said. “So [Disney World] just wasn’t the right time and I don’t want to confuse the issue. We’re going through a hard time.” Later in the interview, Courteney revealed the real reason for her and David’s breakup was because of how “different” they were. “You can’t count [Disney World] as the place where you know I’m not into you. I had just woken up,” she said. “I don’t think [sexual attraction] is the issue. The truth of the matter is that we love each other so much. We have such affection for each other but we are very different.”

She continued, “We are not fighters. We probably don’t get as real as we needed to as we do now. there are a lot of things that David likes to do completely the opposite things I do. I’m a homebody. David…doesn’t drink anymore, he’s completely sober, but he likes to go out and dance…I don’t want to inhibit him in his life,” Cox explained. “He really is a very gregarious guy, he’s very outgoing. I’m much more of an introvert.”

Courtney and David filed for divorce on the same day in June 2012. They finalized their divorce in May 2013. “Irreconcilable differences have caused the irremediable breaking of the marriage,” read court documents obtained by People signed Courtney, David and a judge. “The marital status of the parties is terminated.” They agreed to joint custody of Coco.

After their separation, David and Courteney went on to star in two more Scream movies: 2011’s Scream 4 and 2022’s Scream 5. They also continue to run their production company, Coquette Productions, together. The company, which they founded in 2012, is a combination of their names. In an interview with Yahoo in 2020, David revealed that he and “never battled” throughout their divorce or as co-parents to Coco. “We’re co-parents to our daughter who’s 16 so we have a really great relationship,” he said at the time. “We’re friends, and we’ve communicated a lot because of Coco.” He continued, “Our daughter’s really great. There’s difficult parts, especially through the teenage years. There’s a lot of emotions and feelings. We’ve just had – not an easy time with it, we’ve just been really open and supportive of each other. We never went head-to-head, [or] battled each other, through the process of divorce and through the process of raising our kid. So it’s made for a friendship and relationship that is out of respect.” Courteney also called David her “best friend” in an interview with People in 2012 .“He’s my favorite person in the world,” she said. “He’s my best friend. No matter what happens in our future, he’s my very best friend.”

Less than a year after she finalized her divorce from David, Courteney started her Snow Patrol singer Johnny McDaid. They announced their engagement in June 2013. In 2019, Courteney confirmed that she and McDaid had ended their engagement but continue to be in a relationship. David, for his part, started dating Entertainment Tonight reporter Christina McLarty in 2011. The two welcomed their first child together, a son named Charlie West, in 2014. David and McLarty ot engaged in July 2014 and married in April 2015. They welcomed their second child together, a son named Augustus Alexis, in 2017.

Scream and Scream 2 are available to stream on Peacock. Here’s how to watch them for free.