Since their breakup, fans have wondered why Ben Affleck and Jennifer Garner’s divorced and caused the end of their marriage of 13 years.

Affleck and Garner met in 2000 on the set of the movie Pearl Harbor. (Garner was married to actor Scott Foley at the time.) Affleck and Garner reunited in 2002 on the set of Daredevil, in which they played love interests Daredevil (Matt Murdock) and Elektra Natchios. “We met on Pearl Harbor, which people hate, but we fell in love on Daredevil,” Affleck told Playboy in 2017. “By the way, she won most of the fights in the movie, which was a pretty good predictor of what would happen down the road—my wife, holding swords and beating the living shit out of me.”

Less than a year after the premiere of Daredevil, Affleck got engaged to Jennifer Lopez. In 2003, Garner announced her separation from Foley and filed for divorce later year. Months later, Affleck announced that he and Lopez had decided to end their engagement. In 2004, news broke that Affleck and Garner were dating. The couple married in 2005 and welcomed their first child together, a daughter named Violet, that December. Their second child, a daughter named Seraphina, was born in 2009 followed by their third child, a son named Samuel, in 2012.

In 2015, Affleck and Garner announced their separation. “After much thought and careful consideration, we have made the difficult decision to divorce. We go forward with love and friendship for one another and a commitment to co-parenting our children whose privacy we ask to be respected during this difficult time. This will be our only comment on this private, family matter. Thank you for understanding,” the former couple said in a statement at the time. The two filed for divorce in 2017 before finalizing their split a year later. So why did Ben Affleck and Jennifer Garner divorce? Read on for the reason Affleck gave for why his marriage to Garner ended. 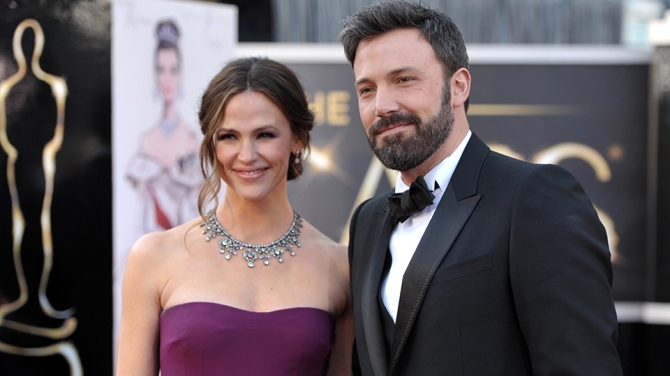 Why did Ben Affleck and Jennifer Garner divorce?

Why did Ben Affleck and Jennifer Garner divorce? In an interview on The Howard Stern Show in 2021, Affleck revealed that he and Garner broke up because they simply “grew apart.” “The truth was, we took our time, we made a decision, we grew apart. We had a marriage that did not work. This happens,” he said. “It is somebody I love and respect, but to whom I should not be married any longer.” He continued, “And then we said, ‘You know what? We tried. We tried, because we had kids.’ And then both of us felt like, ‘We don’t want this to be the model that our kids see of marriage.'”

Affleck told Stern that he and Garner “would have ended up at each other’s throats” had they not ended their relationship. He also believed that he “would probably still be drinking” if their marriage continued. “That was part of why I started drinking alcohol, I was trapped,” he said.  “I was like, ‘I can’t leave because of my kids, but I am not happy. What do I do?’ What I did was drink a bottle of scotch on the couch, which turned out not to be the solution.”

When it came time to end their relationship, Affleck confirmed that he and Garner “did it amicably,” though he confirmed that he and his ex-wife have had “moments of tension” since their split. “Did we have moments of tension? Did we have disagreements over the custody? Was stuff difficult for us? Did we get angry? Yes,” he said. “But fundamentally it was always underpinned with respect. I knew she was a good mom. I hope that she knew that I was a good dad. I was. I had to get sober, I knew that too and I acknowledged that. I said, ‘You’re right. I’ve got to quit drinking.'”

In the interview, Affleck also slammed the “fucking horrible lies” that were told at the time of his and Garner’s separation in 2015. At the time, Us Weekly reported that Affleck had cheated on Garner with their nanny, Christine Ouzounian. A rep for Affleck denied the claims at the time. “The story is complete garbage and full of lies,” the rep said. “It’s shameful. We are considering legal options.”

Garner also denied that the nanny was the reason for her and Affleck’s separation in an interview with Vanity Fair in 2016. “We had been separated for months before I ever heard about the nanny. She had nothing to do with our decision to divorce. She was not a part of the equation. Bad judgment? Yes,” she said. Garner also called Affleck the “love of her life” in the interview. “‘What am I going to do about that?’ He’s the most brilliant person in any room, the most charismatic, the most generous. He’s just a complicated guy,” she said.

In 2021, Affleck and Lopez—who dated from 2001 to 2004 and got engaged in 2002—had reunited A source told Page Six at the time that J-Lo and Ben were on “different paths” when they first dated but always had feelings for each other. “Jennifer was ready to settle down and have kids, but Ben wasn’t keen on giving up his bachelor lifestyle just yet. In the end, she got tired of waiting for him to come around — even though it broke her heart to end things,” the insider said.

The source continued, “Jennifer always saw Ben as the one that got away. She was crushed after they broke up, though she felt at the time that she had no other choice but to call off their engagement.” In her 2014 memoir, True Love
, J-Lo referred to her breakup with Ben as her “first real heartbreak.” “Ben and I split up at the moment when I thought we were committing to each other forever,” she wrote. “It was my first real heartbreak, it felt like my heart had been torn out of my chest.”