Bana is over, but why did Ben Affleck and Ana de Armas break up? A source told People on Monday, September 18, that Affleck and Armas had split after less than a year of dating.

Affleck, 48, and Armas, 32, met on the set of the upcoming film Deep Horizon in New Orleans in early 2020. News broke of their relationship in March 2020 when they were photographed on vacation in Cuba, where Armas is from. The two then traveled to Costa Rica before their return to Los Angeles. Now it seems like Affleck and Armas are over. But why?

Well, according to People‘s source, Armas was the one who broke up with Affleck, and she did so because she doesn’t want to stay in Los Angeles, where Affleck has to live for his kids with his ex-wife Jennifer Garner. (Garner and Affleck, who divorced in 2018, share three kids: Violet, 15, Seraphina, 12, and Samuel, 8.)  “Ben is no longer dating Ana,” the insider said.. “She broke it off. Their relationship was complicated. Ana doesn’t want to be Los Angeles based and Ben obviously has to since his kids live in Los Angeles.”

Though Armas was the one to initiate the breakup, the source confirmed that the split was “completely amicable.” “This is something that was mutual and something that is completely amicable,” the insider said. “They are in different points in their lives; there is deep love and respect there. Ben continues to want to work on himself. He has three jobs lined up and he’s a solid father at home. They are both happy with where they are in their lives.” 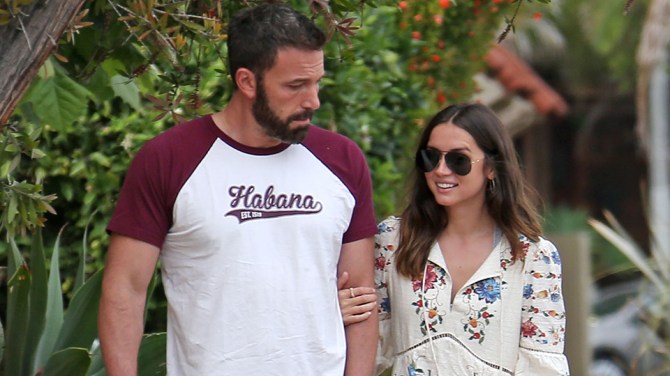 A source for Us Weekly echoed the “amicable” split, claiming that Armas and Affleck were simply “moving in different directions.” “The breakup was amicable, [but] she was the one who called things off,” the insider said. “Ben and Ana were moving in different directions in their lives and stopped seeing eye to eye. The two couldn’t work through their differences and have decided to end their relationship.”

As for how the split happened, a second source told People on Monday that the two broke up with each other over the phone. “They have had numerous discussions about their future and they decided together to break up,” the insider said.

Despite their split, a source told Entertainment Tonight that the two still have “a lot of love and respect for each other,” so fans shouldn’t expect any bad blood.

“Ben and Ana have split up and Ben is single,” the insider said. “They had little arguments and bickered like any couple but ultimately the relationship just wasn’t working in the way they both wanted it to anymore. This was a mutual decision. They both have a lot of love and respect for each other, but it was time for them to move on. At the end of the day he chose to be the dad he continues to want to be. Unfortunately they are in different places in their lives.”