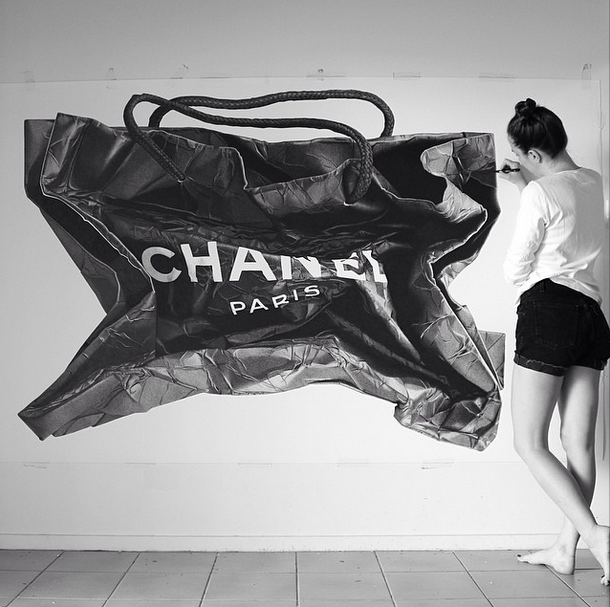 Would you spend $50,000 on a drawing of a designer shopping bag? Well, that’s the going rate for a piece by CJ Hendry, an Australian-born, New York-based artist who’s caught the eye of everyone from Kanye West to Vogue.

It’s not just the fashion-forward and famous who are into her work, either: Hendry’s racked up a devoted Instagram following who’ve been purchasing her pieces through the social media app, often before they even see the finished product. In fact, the 27-year-old sold out her inventory via Instagram last year, with one buyer snatching up a drawing of a crumpled Louis Vuitton bag within 15 minutes of the piece being shared.

Hendry’s medium is technically drawing—she uses dozens of black ink pens per piece—but she humbly describes it as scribbling. “I use many pens and a single sheet of paper and scribble consecutively in tiny circles to create my image,” she said. “There are many techniques that are similar, like stippling [dots upon dots] and cross-hatching [many crosses upon each other] [but] Scribbling works for me.” (Her method is seriously captivating–check out this this video to see how she works).

Like so many creatives before her, Hendry’s path wasn’t always a straight-shot to artistic success. She quit college in 2013—where she was majoring in accounting and finance—to pursue art full time, a decision that paid off big-time. Last year, she hand-delivered a custom piece to Kanye West backstage during his Yeezus tour, and soon after was contacted by boxing great Floyd Mayweather about a pair of boxing gloves she’d been sketching. She’s completed three series of work, held two solo exhibitions, and has now relocated to New York, where we caught up with her. Keep reading to get to know this artist on the rise!

StyleCaster: How long have you been drawing?
CJ Hendry: Since a very young age–maybe early teens–but I’ve only started to take it seriously since early 2013. So, a little over two years now.

What made you decide to quit school to pursue art full-time?
I was on the borderline of getting kicked out so decided to beat them to it and dropped out instead. I was studying a degree that [didn’t resonate with me]–accounting and finance. I got into it for the wrong reasons, I was captivated by the potential of financial gain.

I said to myself that I’d draw for 365 days and if I didn’t sell anything in that time then I’d try to re-enroll at [university] and go back to what I was doing. No one knew what I was doing—neither did I—and I just kind of said, “To hell with it, things can’t get much worse than they are now.” 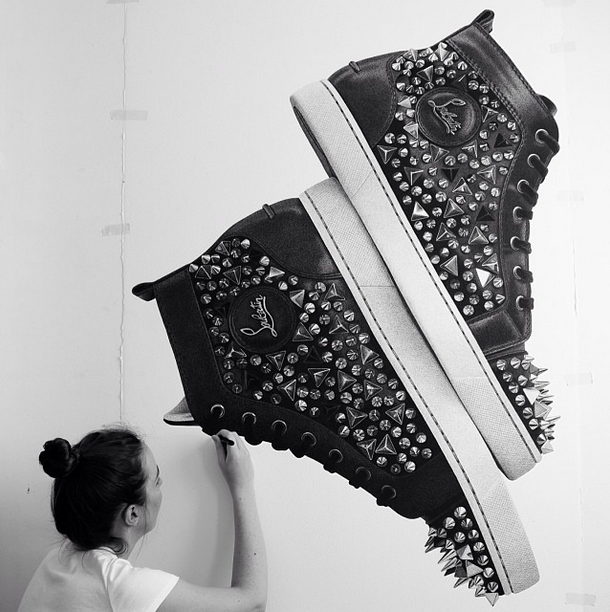 You created a piece for Kanye West—tell us all about it.
The piece for Kanye was based on irony more than anything, superimposing his face on a $100 bill kind of plays on his perceived ego and his public persona. The fact that it was crumpled has nothing to do with anything, more so that I like crumpling things.

I had the opportunity to meet him and hand over the piece of art and I was blown away with what didn’t happen. He wasn’t arrogant, nor was he puffed up at all. He greeted me by name in a soft calm voice and had a massive smile on his face. He’s soft-spoken and asked heaps of questions. I was so bloody starstruck I could hardly get a word out but I managed a mumble and grumble here and there.

I met him 10 minutes before he performed his Yeezus show which is a very intense and aggressive performance, but he was surprisingly relaxed, just hanging out with his posse and sipping water. He is and always will be a legendary musical artist in my eyes. Sorry haters, but this guy is brilliant! 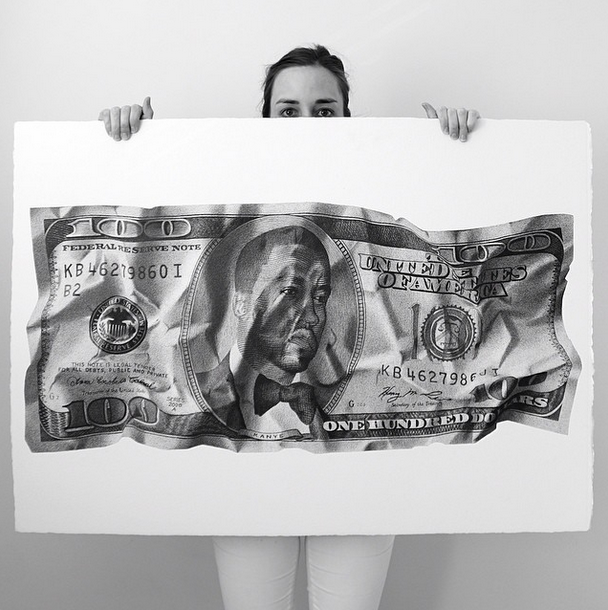 What did you guys talk about?!
About art and ideas, he told me he used to draw with ink at art school. We spoke about university and if it is or isn’t necessary and we both agreed that it depends on the person–it never worked for us.

Your recent collection of fashion bag drawings received a ton of buzz. Tell us about that series.
I just had a few luxury shopping bags lying around the house and they were dog-eared and battered. I crumpled them up and was about to throw them in the bin but as I was doing this I was drawn to the irony of these luxury paper shopping bags being disregarded and tossed out. These paper shopping bags are iconic in their own right and they’re free when you purchase anything in store. Often people hold onto these mementos until they literally fall apart. I loved the idea of crumpling them, and drawing them on a large scale.

I’m still not finished—I always said I wanted to draw at least 15 and I only did five, so I’m keen to do some more. They’re still my favorite thing I’ve drawn. 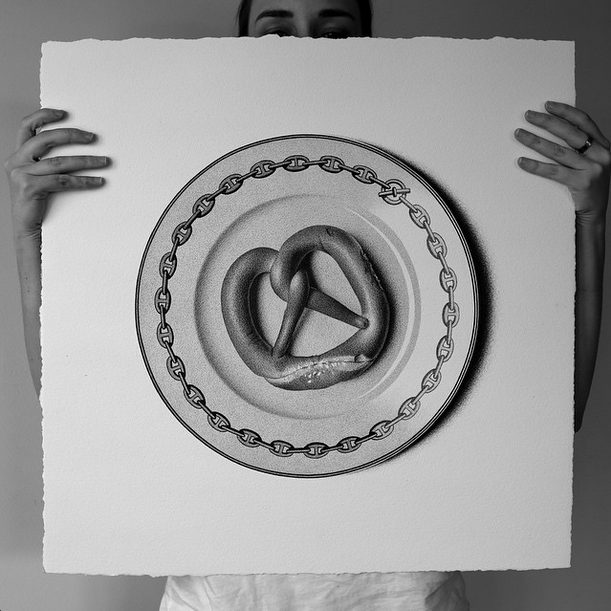 How did you make the move from amateur artist to professional?
It definitely wasn’t a planned move nor was it expected. I was just kind of drawing and loving it and then someone wanted to buy something, then another person, then I got picked up by my current dealer (The Cool Hunter), then we did an exhibition in Sydney which randomly sold out, then we did another exhibition in Melbourne which randomly sold out again. It’s been an incredibly rewarding couple of years but with it has come a lot of self doubt—you never know how things are going to pan out, you just got to do your thing on your own terms.

Where do you find inspiration?
There isn’t one place in particular. Most of the time ideas come randomly and in the most obscure places. I did a series recently called “50 foods in 50 days.” I was literally scrolling through Facebook and someone posted an article on death row inmates and their last meals. This article was the start of what eventually became my series. Obviously, super-stylized singular foods on Hermès plates is a far cry from inmates’ last meals, but that particular article got the ball rolling.

Why is so much of your work inspired by fashion?
Mainly because I’m just a fangirl like everyone else. I used to work in luxury retail at Chanel, but even before that I was fascinated by the way luxury brands showcased their goods. 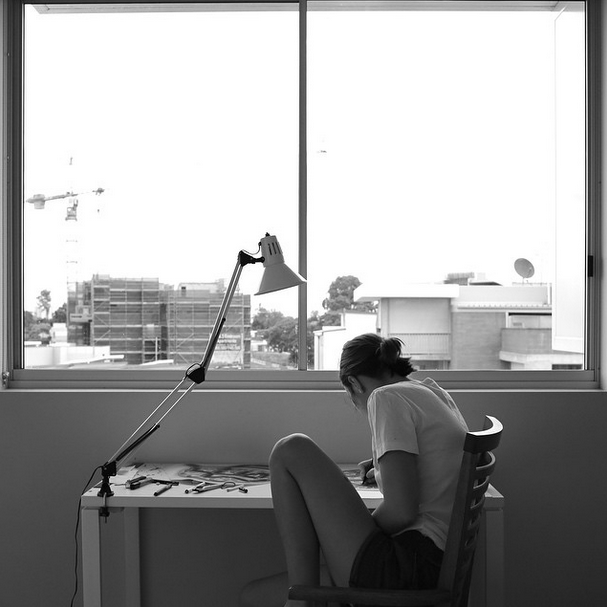 How long does an average piece take, from start to finish?
Obviously it varies. The large crumpled bags took about three weeks and some of the smaller pieces a couple of days. Each day is quite long, I’ll sit down and draw for about 15 to 18 hours a day depending on how I’m feeling. Somehow I get to the end of the day and wonder where the hours went.

What role does Instagram play in selling and promoting your art?
Instagram is the main platform where people can view each piece being created. When I post a picture of the finished sketch, it’s generally sold before it’s even posted. My dealer also has an email database of interested buyers so when I start a sketch he emails them with the idea and dimensions and interested buyers will email back. 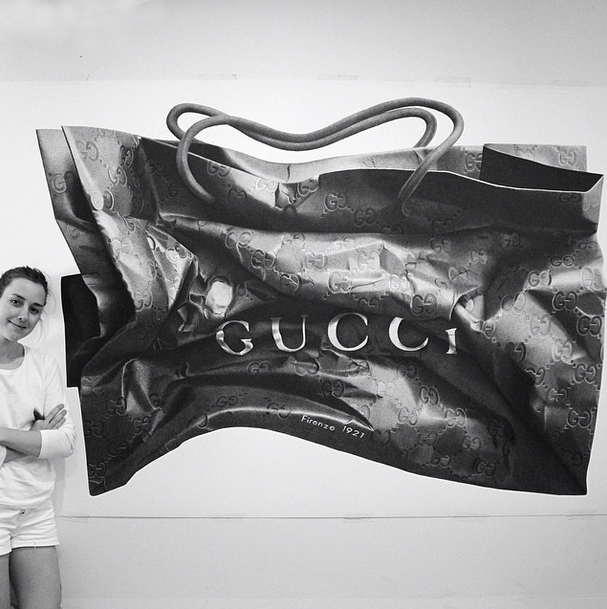 If someone wants to get their hands on one of your pieces, how do they buy one?
The best way is to email my dealer from The Cool Hunter. He responds to everyone so don’t think any query is too strange!

What advice do you have for anyone else wanting to pursue a career as an artist?
You spend 80% of your day working so why not enjoy it? Obviously circumstances are different for everyone but if you have the opportunity to do something you have always wanted to do then try it out even if its only for a month or two. 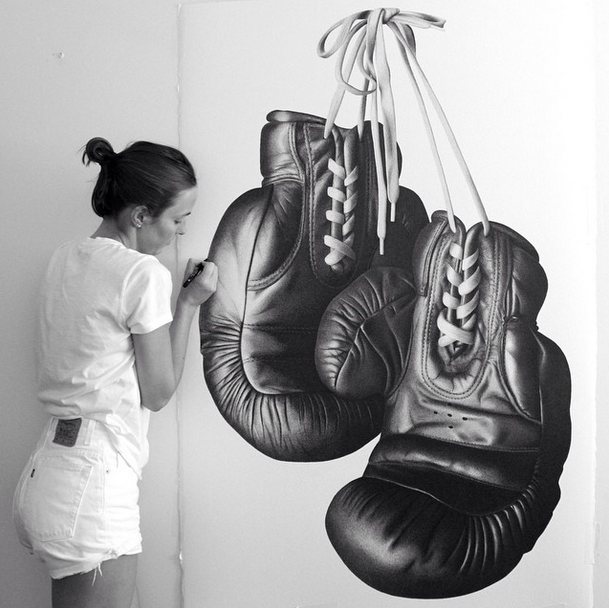 Can you share anything about what’s next for you?
Not too sure what’s in the cards. I have a book full of ideas that I write down but nothing has stuck just yet, I’m letting my ideas swim around for a while. I’m going to start drawing [again] in a couple of weeks, and will spend a month or two drawing personal pieces for my new apartment. I’ve never drawn anything for myself so I’m kind of excited to fill an apartment with pieces I like.