Since their split, fans have wondered why Amber Heard and Elon Musk broke up and if their split was caused by Heard’s much-publicized defamation trial with her ex-husband, Johnny Depp.

Heard and Musk started dating in July 2016 after they were first seen together at the Delano South Beach in Miami, Florida. The two starred together in the 2013 movie, Machete Kills, in which Heard played “Miss San Antonio” Bianca Vasquez and Musk made a cameo as himself. “Elon is attracted to her edginess. She isn’t frightened about being different,” a source told People in 2016. She doesn’t get easily intimidated. She is very focused and loves to learn.” The two split for the first time in August 2017 before reuniting five months later and breaking up for a second and final time in February 2018.

Heard and Musk’s relationship came after her divorce from Depp in 2016 after 15 months of marriage. After she filed for divorce, Heard obtained a temporary restraining order against Depp, claiming that he abused her while under the influence of drugs and alcohol. Depp denied the accusations, and a $7 million settlement was reached out of court in August 2016. Heard pledged to donate the money to the ACLU and the Children’s Hospital of Los Angeles. “Our relationship was intensely passionate and at times volatile, but always bound by love. Neither party has made false accusations for financial gain. There was never any intent of physical or emotional harm,” the two said in a joint statement at the time.

In 2018, Heard wrote an op-ed in The Washington Post about her experience with domestic abuse. While she didn’t mention Depp by name, many believed that the post was about her ex-husband. Depp sued Heard for $50 million for defamation in 2019, claiming that the op-ed cost him acting jobs, including his role in Walt Disney Pictures’ Pirates of the Caribbean franchise. The trial for the case started in 2022. But back to Heard and Musk. Why did Amber Heard and Elon Musk break up and how much of their split had to due with her defamation case with Johnny Depp? Read on for what we know about Amber Heard and Elon Musk’s breakup and the reason for their split.

Why did Amber Heard and Elon Musk break up? 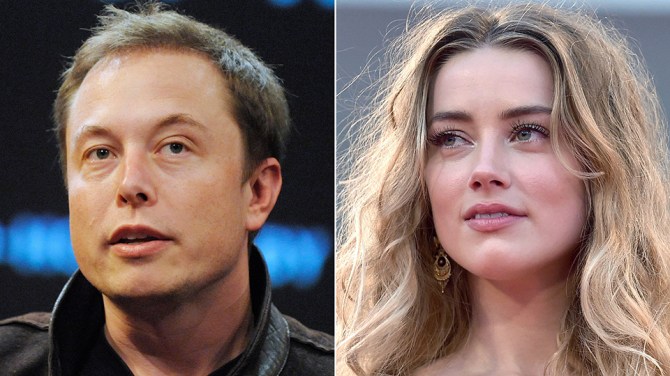 Why did Amber Heard and Elon Musk break up? Heard and Musk split for the first time in August 2017 after less than a year of dating. A source told People at the time that the breakup was due to their “busy” schedules. “They had fun for a few months, but are both very busy with work now. It was getting hard to find time to see each other,” the insider said, adding that Musk was the one who initiated the split. “Elon’s is working day and night. This is his life and he loves it. He is in no position to be in a relationship right now and ended it.”

The two later confirmed the breakup with their own statement. “All relationships have their ups and downs, of course. People occasionally send out speculation, which has no basis in fact, without our knowledge, believing that that they have our best interests in mind,” Heard and Musk said at the time. “Sometimes, other agendas are at work. It can get a little weird… However, we would like to state directly that we have the utmost respect for one another, and it would be troubling if anyone had the impression that we thought otherwise.” Musk also addressed the split on his Twitter, confirming there was still “love” between him and Heard. “Btw, just to clear up some of the press storms this weekend, although Amber and I did break up, we are still friends, remain close and love one another,” he tweeted at the time. “Long-distance relationships when both partners have intense work obligations are always difficult, but who knows what the future holds.” Despite People’s report that Musk was the one who initiated the breakup, Musk credited Heard for the split in an interview with Rolling Stone at the time. “I just broke up with my girlfriend. I was really in love, and it hurt bad… Well, she broke up with me more than I broke up with her, I think,” he said.

Five months after their breakup, Heard and Musk reunited. They ended their relationship for a second time in February 2018. A source told Us Weekly at the time that the second and final split was due to Heard wanting “independence.” “Amber wants her independence and prefers being friends rather than romantically linked,” the insider said. Another source added, “Elon decided it was time to end things, and Amber agreed. They both care for one another, but the timing just isn’t right.”

Where are Amber Heard and Elon Musk now?

Where are Amber Heard and Elon Musk now? Musk confirmed that he and Heard still have an amicable relationship in a tweet in May 2022, in which he called both her and her ex-husband, Johnny Depp, “incredible” amid their defamation trial. “I hope they both move on. At their best, they are each incredible,” Musk tweeted in response to a Twitter user who listed their takeaways from Heard and Depp’s trial.

Musk’s tweet came three years after Depp accused Head of cheating on him with Musk in his initial defamation lawsuit in March 2019. Depp claimed in the lawsuit that Heard and Musk started their affair in March 2015, a month after Depp and Heard married. “Unbeknownst to Mr. Depp, no later than one month after his marriage to Ms. Heard, she was spending time in a new relationship with Tesla and Space X founder, Elon Musk,” the legal documents read. “Only one calendar month after Mr. Depp and Ms. Heard were married—while Mr. Depp was out of the country, filming in March 2015—Eastern Columbia Building personnel testified that Ms. Heard received Musk ‘late at night’ at Mr. Depp’s penthouse. Specifically, Ms. Heard asked staff at the Eastern Columbia Building to give her ‘friend Elon’ access to the building’s parking garage and the penthouse elevator ‘late at night,’ and they testified that they did so. Building staff would then see Ms. Heard’s ‘friend Elon’ leaving the building the next morning.”

Depp’s attorneys also claimed in the lawsuit that Musk’s first time at Depp’s home with Heard was after the “severed finger” incident of March 2015, when Depp lost the tip of his finger. Depp claims that Heard threw a vodka bottle at him, which severed his finger, while Heard claims that she wasn’t awake at the time of the injury and that Depp assaulted her with the vodka bottle that same night. “Musk’s first appearance in Mr. Depp’s penthouse occurred shortly after Ms. Heard threw a vodka bottle at Mr. Depp in Australia, when she learned that Mr. Depp wanted the couple to enter into a post-nuptial agreement concerning assets in their marriage,” the legal documents read. “Ms. Heard’s violently aimed projectile virtually severed Mr. Depp’s middle finger on his right hand and shattered the bones. Mr. Depp’s marriage to Ms. Heard came to an end in May 2016.”

Texts between Heard and Musk were also read aloud at a 2020 court hearing over Depp defamation case against Heard. In the texts, Heard told Musk that she wanted a restraining order against Depp for an alleged domestic violence incident the day before. Musk responded by offering her “24/7” security. The text continued, “The offer would stand, even if you never wanted to see me again… anyway, sorry for being an idiot. The radio silence hurts a lot. It only matters because I really like you.”

At another court hearing in 2020, Josh Drew—the ex-husband of Heard’s best friend Raquel “Rocky” Pennington who also lived rent-free in a home owned by Depp—claimed that Heard had a threesome with Musk and Cara Delevingne when she was still married to Depp. “Did she ever tell you in words or substance while Amber was still married to Johnny Depp that the three of them, Amber Heard, Elon Musk and Cara Delevingne spent the night together?'” attorney Benjamin Chew asked, to which Drew responded, “Yes. To the specific date, I can’t say.” Chew continued, “So they were having a three-way affair, correct?” Drew responded, “My understanding, yes.”

A representative for Musk denied that he had a threesome with Delevingne and Heard in a statement to to Page Six in June 2020. “Cara and I are friends, but we’ve never been intimate. She would confirm this,” he said. “Also, I wish to confirm again that Amber and I only started going out about a month after her divorce filing. I don’t think I was ever even in the vicinity of Amber during their marriage!” He continued, “Regarding this lawsuit, I would recommend that everyone involved bury the hatchet and move on. Life is too short for such extended negativity. Nobody is going to say, after it’s all over, that they wished the court battle had lasted longer!”

In April 2022, a representative for Musk also denied Depp’s claim that Heard cheated with him. In a statement at the time, Musk claimed that he and Heard didn’t start dating until May 2016, the same month Heard filed for divorce from Depp for irreconcilable differences. “Elon and Amber didn’t start seeing each other until May 2016, and even then it was infrequent,” the representative said in a statement. “Their relationship didn’t become romantic until some time later.” The statement came around the time Musk’s attorney, Alex Spiro, also told E! News that the Tesla founder—who was listed as a potential witness for Heard in pre-trial filings for the case—would not be testifying at Heard and Depp’s trial.