Since their split, fans have wanted to know: why did Aaron Rodgers and Shailene Woodley break up and what was the reason for the end of their relationship?

Woodley and Rodgers started dating in 2020 after they were introduced to each other through a mutual friend who are musicians. Within months of dating, they moved in together in Los Angeles and traveled back and forth between L.A. and Green Bay, Wisconsin, where Aaron plays for the Green Bay Packers. “You could travel, but you had masks on,” Woodley told The Hollywood Reporter in 2021. “There was a sense of anonymity that otherwise I don’t think we would have had. We were really able to get to know one another the way we wanted to get to know one another and not have any noise or chaos around us.

Woodley confirmed her engagement to Rodgers in February 2021. “Yes, we are engaged,” Woodley said in an interview on The Tonight Show Starring Jimmy Fallon at the time. “But for us, it’s not new news, you know, so it’s kind of funny. Everyone right now is freaking out over it and we’re like, ‘Yeah, we’ve been engaged for a while.’ ”

The Big Little Lies alum also told Fallon at the time that she didn’t know who the NFL player was before she met him. “I still have never been to a football game because we met during this wacky, wacky time and all the stadiums were closed that he was playing in. So, I have yet to go to a football game,” she said, admitting that she’d “never seen one football game before” and that sports weren’t on her “radar.” She added, “I don’t know him as a football guy. I know him as like the nerd who wants to host Jeopardy! That’s the dude I know. He just happens to be very good at sports.” 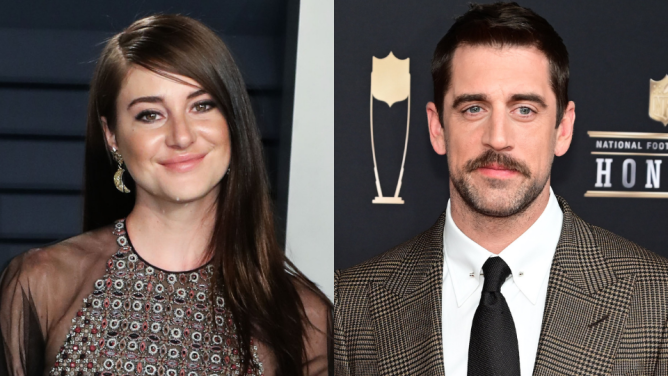 Why did Aaron Rodgers and Shailene Woodley break up?

Why did Aaron Rodgers and Shailene Woodley break up? People confirmed Rodgers and Woodley’s split on February 16, 2022, a year after their engagement. “It was an amicable split; it just wasn’t working,” the source said. “They’re very different people with busy careers and there were obstacles that they couldn’t surmount. They will remain friendly; there’s no bad blood and no drama. It just didn’t work out for them.”

A source told In Touch at the time that the couple split because Woodley felt “neglected” by Rodgers in favor of his career. “While Shailene is supportive of Aaron’s career, he put football first and they were barely spending any time together,” the insider said. “She felt he neglected their relationship. Neither of them was happy.” A second source also told In Touch that Rodger is an “independent guy” and “got cold feet” about his engagement to Woodley. “[They] couldn’t make it work,” the source said. “There were too many obstacles. They’re both adults and decided to part amicably.”

Another source told Us Weekly at the time Woodley and Rodgers hadn’t “been spending any time together” in the weeks up to their split because of how “focused” Rodgers is on his career with the Greenbay Packers. “Shailene has been super busy with work,” the insider said. “Everything was so different during lockdown, and they had been living in their bubble. Friends of Shailene didn’t believe Aaron is the best match for her.” A second source told the magazine that Woodley and Rodgers’ different interests also played a part in their split.

“They certainly had their differences and ultimately their relationship didn’t work,” the insider said. “They thought were a good match for each other in the beginning but the more they got to know each other they realized their careers, their interests [and] their political views weren’t aligned.” The insider also added that Rodgers is “very passionate about his football career,” which affected how Woodley felt in their relationship. “He was focusing more on the sport than on future plans with Shailene,” the insider said.

In an interview with Net-A-Porter, on January 23, 2023. Woodley opened up about how the relationship affected her mental health while filming Three Women. “It was hard to film because I was going through the darkest, hardest time in my life; it was winter in New York, and my personal life was s—-, so it felt like a big pain bubble for eight months,” she said. “I was so grateful that at least I could go to work and cry and process my emotions through my character.” She continued, “Three Women feels like it matters a lot — mostly, I think, because it mattered so much to me. I feel honored to be a part of it, because it genuinely gave me a North Star in a time in my life when my compass … calibration did not exist. And I think it has the potential to provide a North Star for other people out there too.”

“It honestly never really hit me that millions of people around the world were actually watching these things and paid attention to them. Then, I dated somebody in America who was very, very famous,” said the Big Little Lies star. “It was the first time that I’d had a quote-unquote ‘famous’ relationship, and I watched scrutiny, opinions, the desire for people to know my life and his life and our life — it just felt violating in a way that, before, it was fun.” She added, “I’m a very private person, and so I found that any time I posted anything, I instantly felt like I was sharing too much of who I am with people I didn’t necessarily trust.”

The split also came after a source told People in December 2021 that Woodley and Rodgers have a “different, non-traditional relationship.” The insider also denied rumors at the time that the couple had split. “Shailene and Aaron are still together. It’s not odd they don’t post about each other on their birthdays in that sense, and are very private about things,” the source said.

The breakup also came after Rodgers, who previously claimed that he was “immunized,” came under fire in November 2021 after he tested positive for COVID-19 and revealed that he was actually unvaccinated. “I realize I’m in the crosshairs of the woke mob right now, so before my final nail gets put in my cancel culture casket, I think I’d like to set the record straight on so many of the blatant lies that are out there about myself right now,” he said on The Pat McAfee Show at the time. “First of all, I didn’t lie in the initial press conference. During that time, it was a very — witch hunt that was going on across the league, where everybody in the media was so concerned about who was vaccinated, and who wasn’t, and what that meant, and who was being selfish, and who would talk about it, and what it meant if they said it was a personal decision.”

He continued, “Had there been a follow-up to my statement that I had been immunized, I would have responded with this: I would have said, ‘Look, I’m not some sort of anti-vax flat-Earther. I am somebody who is a critical thinker.’ You guys know me. I march to the beat of my own drum. I believe strongly in bodily autonomy and the ability to make choices for your body.”

During the interview, Rodgers claimed that he didn’t get vaccinated because he’s “allergic” to an ingredient in the Pzifer and Moderna vaccines. (He didn’t specify the ingredient.) He also noted that he opted against the Johnson and Johnson vaccine because he had “heard of multiple people who had had adverse events” after they received the vaccine. ESPN also reported at the time that Rodgers asked the NFL about “alternate treatments” he could have instead of the vaccine.

A source told People in January 2022 that Woodley and Rodgers have “agreed to disagree” on several topics including politics. “They are not talking about their politics, and they never really have,” the insider said. “They disagreed on a lot of things. Early on, they decided to agree to disagree about things and not debate them.” The source continued, “She is not someone whose mind you can change, so Aaron hasn’t even tried.”