If you’ve been following Reality Steve’s spoilers, you may be curious to know who is Dale Moss, the Bachelorette 2020 contestant Clare Crawley quit for. As Bachelor Nation members know, Clare, the runner-up from Juan Pablo Galavis’ season of The Bachelor in 2014, was announced as the season 16 Bachelorette in February. Her season was scheduled to start filming in March, but because of the current health crisis, production was pushed back until July.

We explained how The Bachelorette will film season 16 in quarantine here, but here’s the gist: Clare and her 40-something suitors (many of whom were backups and didn’t make it on the show) were flown to La Quinta, California, in July to quarantine for 14 days before they were allowed on set at the La Quinta Resort & Club. (Host Chris Harrison and The Bachelorette‘s crew members also had to quarantine.) After those 14 days were over, Clare’s season officially started filming. However, halfway into production, there was a roadblock when, according to Life & Style and Reality Steve, Clare threatened to quit the show after she already fallen in love with one of her contestants: Dale Moss.

Ahead, we break down what we know about Dale and his whirlwind romance with Clare that led Tayshia Adams, a runner-up on Colton Underwood’s season of The Bachelor, replacing her as The Bachelorette.

Who is Dale Moss? 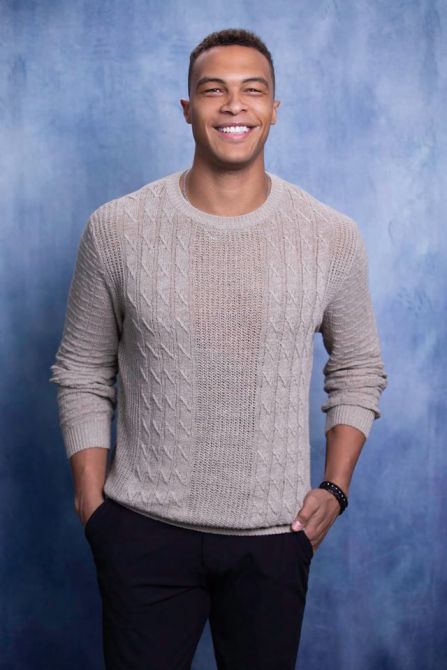 Let’s start with the basics: Who is Dale Moss from The Bachelorette 2020? Dale, who has his own Wikipedia page (yes—he’s famous enough to have his own Wiki page), 31-year-old from Brandon, South Dakota. His birthday is September 24, 1988, which means that he’s seven-ish years younger than Clare, who is 39 and was born in 1981.

What is Dale Moss’ job?

Like other Bachelorette alums (Colton Underwood, Tyler Cameron—the list goes on), Dale is a former NFL player. He signed with the Green Bay Packers in May 2012 and practiced with the Wisconsin team until his release in August 2012. After that, Dale signed with Florida’s Tampa Bay Buccaneers, but was also released after a few months in November 2020. Two weeks later, Dale signed with the Chicago Bears but left in August 2013. He then moved onto the Chicago Panthers and was waived again in August 2013. Dale then relocated to California and was assigned to the Los Angeles Kiss of the Arena Football League in January 2014. After making nine catches for the Kiss, Dale was re-signed by the Chicago Bears in July 2014.

So that’s his full NFL history. As for his college career, Dale also played college football for South Dakota State University. He played as a wide receiver at the university for one year. He also competed on the school’s basketball team for four years. Dale isn’t the first professional athlete either. He’s the nephew of professional football player Johnny Rodgers, who won Heisman Trophy, a coveted football award, in 1972. Along with football and basketball, Dale also ran track at Brandon Valley High School in South Dakota.

As for what he’s done after the NFL, Dale works as a model and influencer. According to his website, OfficialDaleMoss.com, Dale has modeled—and executive produced and provided creative direction for—brands like Under Armour, Hugo Boss, Express and United Airlines. He’s also worked with media outlets such as Vayner Media & One37pm. Because of his website, though, there are some fans that Dale may not have been on The Bachelorette for the right reasons. But we digress. (Can’t know for sure until we watch the show.)

Beyond Dale’s modeling career, he also hosts his own podcast, “The Game Plan,” and has done hosting for the site PopStyle TV. Dale is also a philanthropist. According to Forbes, Dale partnered with The Lonely Entrepreneur, a nonprofit that “ensures women, minorities, former athletes and the less fortunate are empowered with the entrepreneurial skills they’ll need to be successful in today’s competitive business world.” Dale has also been a global ambassador for the Special Olympics. He told Forbes in 2019 that his passion for philanthropism is inspired by his sisters and mother.

“To this day, my sisters and my mother have shaped me into the man I am. I’ve always had strong, powerful women in my life and they’ve helped me in every aspect. They’re part of my team, my core and that’s definitely what keeps me grounded.” he said at the time.

Who did Dale Moss date before Clare? 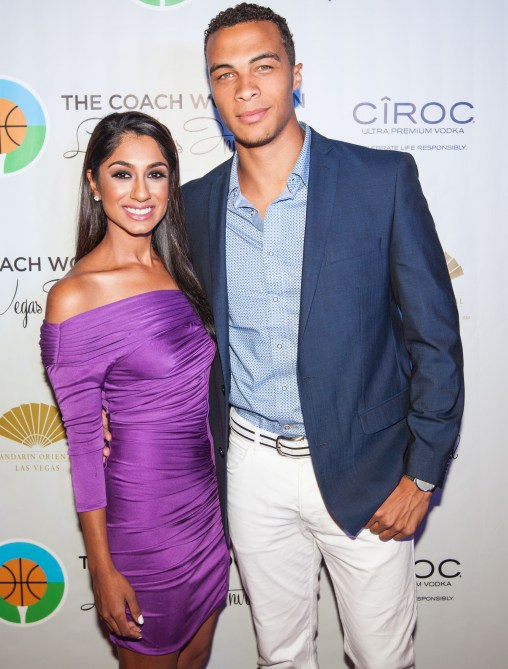 Little is known about Dale’s pre-Bachelorette dating history, but what we do know is that he did date professional golf player Seema Sadekar before his time on Clare’s season. Life & Style reported that Seema “broke off [her] relationship” with Dale years before his relationship with Clare. “I don’t have details what exactly happened,” the source told the magazine “Based on how happy they looked, I was a bit surprised when they broke up.”

The insider continued, “Seema and Dale were deeply in love. As a couple, they were very nice. They looked very happy whenever I saw them together. They dated for a few years and their families were very close.”

The source also notes that the “last time” Dale and Seema were “together” was “three years ago,” which means that they both have likely moved on from the relationship since.

“They definitely were a gorgeous couple. When they walked into a room, it was like everyone was looking at them,” the insider said. “They were just that kind of couple, like the ‘it’ couple. They just seemed so in love and so happy, and they’re both beautiful! They would go to a lot of fancy VIP events—definitely a social couple.”

While it’s unclear how long they dated exactly, the source notes that Seema and Dale were together “for a while.” “When I met him, they had just broken up. My impression was he always wanted to get back with her,” the insider said. “When it comes to girls, she’s the one he would talk about the most.”

Reality Steve confirmed in July that Dale received Clare’s First Impression Rose. “Although early social media activity was leading people to believe he never made it on the show or was eliminated night 1, that was never the case. Dale Moss received Clare’s first impression rose,” Reality Steve tweeted at the time.

As Bachelor Nation members know, the First Impression Rose, especially on The Bachelorette, is an indicator of who could win the season—or at least go very far. Seasons 11, 12, 13 and 14 of The Bachelorette all saw the First Impression Rose receiver win the season—and it looks like that was also the case for Clare, who left the show to be with the Dale.

What Happened With Dale & Clare’s Relationship?

Reality Steve confirmed in August that Clare quit The Bachelorette because she was in love with Dale. The news came after Life & Style reported that Clare had “already fallen in love” with Dale and threatened to leave the show. “She told producers she no longer wanted to participate in the show,” a source told the magazine. The insider also noted that the production was “blindsided” by Clare when she “refused to come out of her room” while filming.

To fix the season, The Bachelorette replaced Clare with Tayshia Adams, the runner-up on Colton Underwood’s Bachelor season and a cast member on season 6 of Bachelor in Paradise, as the Bachelorette. Reality Steve also reported at the time that Clare and Dale will be separated until the season finishes filming. Clare will remain in La Quinta, while Dale was seen in his hometown in South Dakota.

Though fans theorized that Clare and Dale talked before her season (which would’ve explained their fast relationship on screen), Reality Steve confirmed in an Instagram Live in August that the two did not communicate before The Bachelorette. They did, however, stalk each other online, which is how they became interested in each other so fast.

Dale and Clare’s relationship may have been fast, but they are engaged, according to Life & Style. The magazine also reported in August that Dale proposed to Clare before her time as the Bachelorette ended, and he put a ring on it. A source told the magazine at the time that Dale and Clare “won’t say exactly when cupid struck,” but production has reason to believe that they were in contact before her season, despite Reality Steve’s reporting. “People are wondering if it was love at first sight when she and Dale met up in Palm Springs two weeks ago,” the insider said.