After a week filled with tributes and events after Her Majesty’s death, many Royal fans are wondering: Who attended Queen Elizabeth’s funeral?

On September 8, 2022, Queen Elizabeth passed away at age 96. Buckingham Palace issued a statement on September 8 confirming the news of Her Majesty’s death. “The Queen died peacefully at Balmoral this afternoon,” the palace’s official statement said. “The King and The Queen Consort will remain at Balmoral this evening and will return to London tomorrow.” Those who were at the Queen’s side during her death include Prince Charles and his wife Camilla the Duchess of Cornwall, and Prince William who is second in line for the throne. The Queen had a lengthy journey from Balmoral Castle in Scotland to Buckingham Palace in London, England. The Queen’s coffin had a procession from the palace to Westminster Hall where her coffin was laid in state for four days before her funeral on September 19, 2022 at Westminster Abbey.

With over 2,000 seats at the Abbey, the Queen’s funeral was attended by many diplomats and celebrities from across the globe. Read down below on the famous people who attended the sacred funeral. 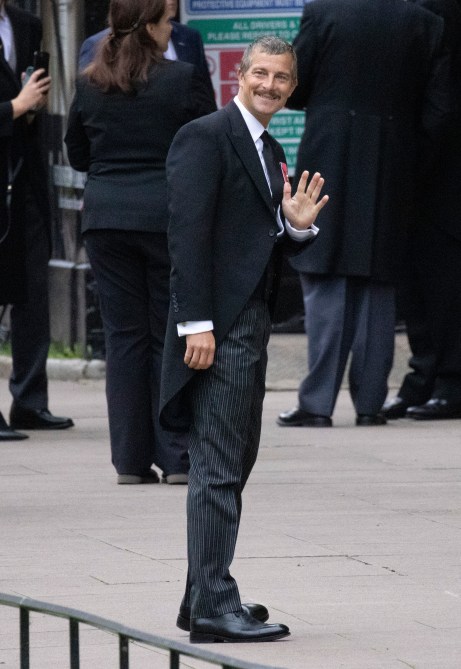 Celebrities like Sandra Oh and Bear Grylls attended Queen Elizabeth’s funeral on September 19, 2022. The two came with different delegations with respect to their own countries.

Killing Eve and Grey’s Anatomy’s Sandra Oh came to the Queen’s funeral along with the Canadian delegation. The actress is a member of the Order of Canada, and went to the funeral along with Canadian Prime Minister Justin Trudeau. The Canadian government announced on September 16, 2022, that the delegation will “participate in a procession of recipients of national honours as part of the service.” Fellow members of the Order of Canada, Mark Tewksbury and Gregory Charles, and Cross of Valour recipient Leslie Arthur Palmer were also included.

Bear Grylls also attended the funeral as a representative of The Scouts. Grylls was appointed the youngest-ever Chief Scout of the United Kingdom and Overseas Territories at age 35 in 2009. In 2019, Grylls was made an OBE in 2019 by the Queen, who was patron of the Scout Association. In a statement, The Scouts and Grylls said that they were “united in sorrow for the loss of our patron”, and she had left a “bright legacy of hope and promise for future generations”.

Another actor who attended the funeral was Sophie Winkleman, known for her role in the comedy series Peep Show, as a member of the royal family. She is married to Lord Frederick Windsor, the son of the Queen’s cousin Prince Michael of Kent. 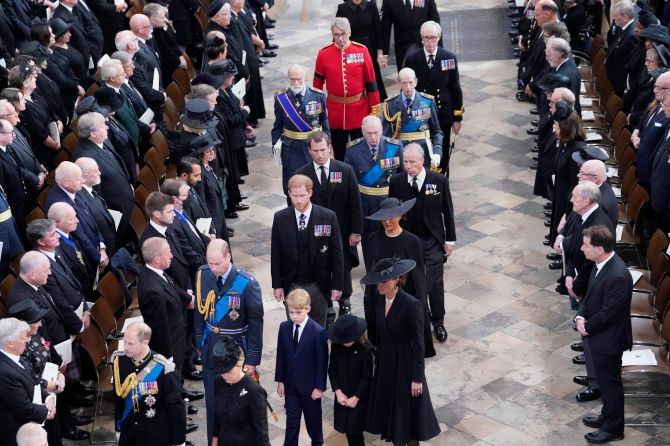 As a prominent leader for more than 70 years, many world leaders came to Westminster Abbey to attend Queen Elizabeth’s funeral. According to BBC, about 100 presidents and heads of government were thought to have been in the abbey

Current UK Prime Minister Liz Truss was in attendance as well as other surviving UK Prime Ministers like Boris Johnson, Theresa May and David Cameron. US President Joe Biden and his wife Jill Biden were seated in the 14th row and reportedly arrived late. They were seated behind Polish president Andrzej Duda. The President of France, Emmanuel Macron, was in attendance with his wife Brigitte. Canadian Prime Minister Justin Trudeau and New Zealand Prime Minister Jacinda Ardern also attended along with their respective delegations. Other Commonwealth countries who attended include South African president, Cyril Ramaphosa, Bangladesh’s PM, Sheikh Hasina, the Sri Lankan president, Ranil Wickremesinghe and the Fijian PM, Frank Bainimarama. China sent their vice-president, Wang Qishan, at the UK government’s invitation.

All the reigning monarchs of the world were invited to the state funeral such as the Queens and Kings of The Netherlands, Sweden, Spain, Norway and Belgium. The Emperor and Empress of Japan also attended and this was their first International visit since they ascended the throne three years ago. Malaysia’s King Sultan Abdullah Sultan Ahmad Shah and Queen Tunku Azizah Aminah Maimunah Iskandariah were seated behind the King and Queen of Jordan. Denmark’s Queen Margrethe II stopped all of her 50th jubilee celebrations after the death of her third cousin, Queen Elizabeth II.