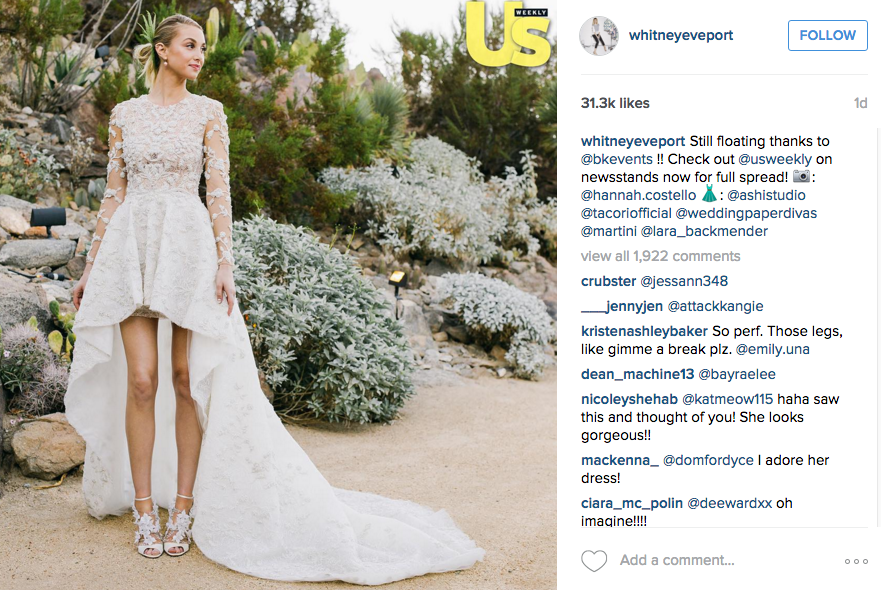 When it comes to celebrity wedding dresses, phoning it in just isn’t an option. It’s not just you and your Facebook friends gawking at pics, it’s the entire Internet and then some, a point ultimate California girl Whitney Port seemed acutely aware of when she tied the knot last weekend with boyfriend Tim Rosenman wearing a pretty stunning—and crazy-unique—dress.

The former MTV reality star and fashion designer, 30, decided to shun the traditional (read: boring) strapless princess cut for a bespoke waterfall dress by Beirut-based brand Ashi Studio, which featured a super-short hem, sheer lace sleeves (a trend we saw again and again at this season’s Bridal Fashion Week), plenty of intricate beading, and a floor-grazing train (dare we say, party in the front, business in the back?) According to Us Weekly, Port’s accessory game was fairly minimal, choosing white gold, pearl, and diamond earrings by Delfina Delettrez.

Beauty-wise, Whitney chose to forgo a fussy updo or overdone waves in favor of a cool-girl bun-ponytail hybrid and simple makeup, both of which made her dress look extra-modern.

“She looked amazing and her dress was so spectacular,” Rosenman, who met Port on the set of “The City,” told Us Weekly. “There was so much buildup to what her dress was going to look like because we kept it secret. I didn’t think it could possibly match the buildup, but I was blown away. She looked fantastic.”

Lets all say it together: Awwww.