Whitney Port may be returning to our TV screens this year in The Hills: New Beginnings, but the former “Whitney Eve” designer is also prepping a return to the fashion industry. “I actually am venturing into the fashion world again come 2020,” she told us, at the H&M Conscious Exclusive collection launch party in LA Wednesday night. Set high above the Hollywood Hills, in a dreamy, secluded treehouse off Laurel Canyon, the party brought out Port, Irina Shayk, Dakota Fanning, Rowan Blanchard and other celebs and influencers to fete H&M’s newest line (in stores and online April 11), which explores the possibilities of sustainable materials and processes in contemporary fashion (think flowing silk-like fabrics made from citrus juice by-products, and chic vegan leather made from pineapple leaf fibers).

Port, who sported a zebra-print suit from H&M’s Studio Collection, said her new collection will be “contemporary women’s fashion,” and while she acknowledged that fans have been asking about her return to designing, she was tight-lipped on any details. “I’m working on it now and I know it’s annoying to tease things, but I can’t say more because I’ve been told not to,” she said.

Port is no stranger to the fashion world. She launched her eponymous “Whitney Eve” collection in 2008, and the womenswear line ran for nine years before shuttering in 2017. More recently, the new mom (to 20-month old Sonny Stanford, with husband Tim Rosenman) was named “Chief Brand Director” of Bundle Organics, helping the baby brand launch healthy snacks and drinks for moms and moms-to-be alike. 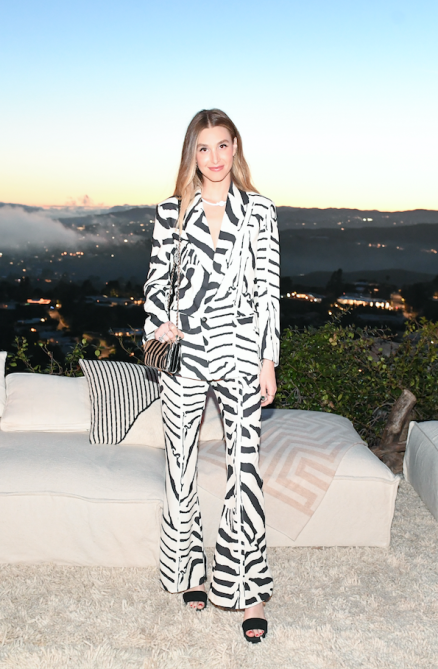 Though she hasn’t revealed the inspiration behind her new venture, Port did lend her thoughts to current fashion, calling out fishnets, crochet, neon colors, tie dyes and “comfortable sequins” as big trends for the summer festival season.

Don’t expect the former Teen Vogue intern to have festival FOMO though. “I have literally gone to Coachella since I was 18, which is scary because that was 16 years ago and so it’s nostalgic for me, but the past couple of years I’ve gone and I’m like, ‘Why am I here?’ The thought of it in my head sounded like so much fun,” she says, “but when I actually got there, I’m like, ‘This is so not for me anymore.'”

As for that other nostalgic event in her life, Port says she’s excited for everyone to see the new re-boot of The Hills, which is rumored to premiere in late spring or early summer. “It’s all about the social interworkings of our new group,” she teased, of the cast additions that include Mischa Barton and model (and Tommy Lee and Pamela Anderson’s son) Brandon Lee.

As for getting back in front of the cameras with Heidi, Spencer and Audrina, Port says they had to make up for lost time. “I knew them from the show but we hadn’t really kept in touch,” she says, “so [the season] is all about reuniting and developing all the new relationships, and seeing what works and what doesn’t.”

While filming wrapped a few months ago, Port says she hasn’t seen any of the footage yet. And while former cast mate Lauren Conrad declined an invitation to return to the show, Port says she’s glad she did it. “It’s been all good,” she says. “It’s actually been really fun.”