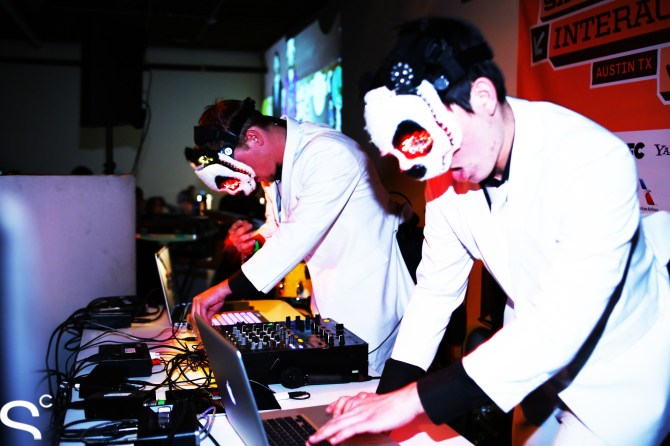 If you’re anything like the StyleCaster crew, you’re chomping at the bits for some new stuff to add to your iPhone or Spotify lists this summer. Last weekend we made you a stellar song list of our own to kick your Memorial Day Weekend into gear. Now, here’s the inside scoop on a new summer production created by some of our favorite pro’s: White Panda.

Today, the Pandas are getting ready to launch a whole new production. We caught up with the cool kids behind the costumes to hear all about it!

How would you describe your stage style – both in terms of clothes and candor?
Fresh white suits have always been a part of our performance. We certainly look fairly dapper at the beginning of the show, though that tends to change as we start dancing around. One of the most crucial aspects of a memorable performance is that the we and the audience are able to feed off each other’s energy. So we try to get as wild as possible while we’re up there.

How would you describe your audience’s style overall?
Sweaty, usually. We see a lot of neon, a lot of homemade clothing, and generally a kind of crazy look that mirrors the show atmosphere quite well.

Where do you find inspiration? Who is going to be a trendsetter in the music scene this year?
For us, it’s about finding music that pushes the envelope of current trends. Plenty of people can replicate what’s already popular, but not many can predict what’s going to be popular and beat the rest to the punch. Daft Punk did that more than a decade ago, and that’s one of the reasons they’re a very sought after act today. A lot of our popularity came from being one of the first groups to fuse the fairly new mashup genre with the soon to be EDM craze. This year, Justin Timberlake might makes some waves with his new dual-release album (though unlikely as big an impact as Futuresex/Lovesounds had), Daft Punk’s release in May should be huge, and I wouldn’t be surprised if Bastille caught fire when their album releases worldwide as well.

What’s your biggest stage pet peeve?
Haha, that’s a tough one. There’s a lot of pressure when you’re up there in front of so many people, so even small things can have a big impact. I guess one of the bad ones is when you’ve thoroughly discussed the show with a venue’s lighting director, and then they just ignore everything previously talked about during the show and can’t get the lights in sync with the music correctly. Having lights and sound in sync is a huge part of the live performance, so when somebody messes that up and it’s out of your control, it’s frustrating.

What gives you a rush when you’re on stage?
A lot of things can get your heart going when you’re up there. We’re always pumping adrenaline right when we walk out. Nothing beats seeing an entire crowd throw their hands up and start jumping in unison. It’s a powerful feeling to be able to make that happen.

What do you have coming up that StyleCaster should know about?
This week, we’re releasing our fifth full length album, and we are super excited about how it’s shaped up. I think we’re going to reinvigorate a love of mashups in a lot of people with this one. We’re planning a nationwide tour, and are going to make an effort to hit a lot of cities we’ve never performed in before. 2013 is going to be a fantastic year.