After a steady stream of ready-to-binge hits landed on Netflix in recent weeks, the streaming giant is already back with another gripping series. This time, it’s a murder mystery. And it feels real enough that fans are already wondering if Netflix’s White Lines is based on a true story.

From the creator of Netflix’s other massive hit show Money Heist, this new 10-part series premiering on May 15 tells the story of Axel Collins—a Manchester-born DJ who makes it big in Ibiza, only to mysteriously disappear at the top of his game. Twenty years later, his body is uncovered, and his little sister Zoe—now married with a child of her own—moves to the Spanish island to investigate what happened to him. What follows has already been described by some as an Ozark meets Outer Banks world of sun-soaked drug cartel drama, rave recklessness, and steamy debauchery (I mean, have you seen the cast? Nuno Lopes is probably already penned for PEOPLE’s Sexiest Man Alive circa 2021). But White Lines’ gorgeous scenery and castmembers aside, tucked within it all is a haunting real-world history.

Some fans might have already picked up on the connection to Ozark predecessor Narcos, Netflix’s famed Pablo Escobar drama. White Lines series co-creator Andy Harries admitted the inspiration in a recent interview with Deadline, which writes that the series gave him the “initial spark” for a series “that straddled Britain and Ibiza.” Yet that’s not the only inspiration. 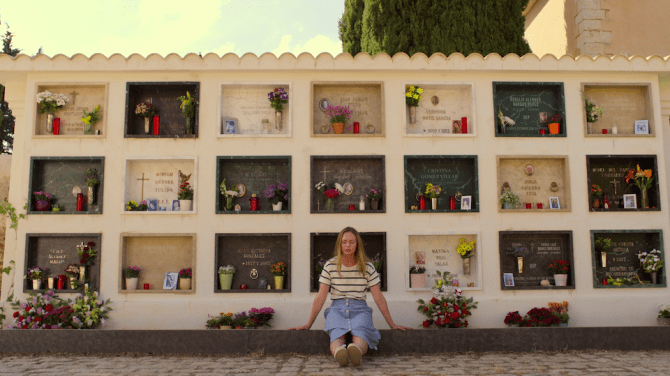 After enlisting Money Heist creator Álex Pina for the project, the pair set their sights on the “folklore of English DJs making pilgrimages to the Spanish island in the 1990s,” as well as the Balearic islands’ “recent associations with crime and corruption.” Namely, murder and missing persons cases.

In 2018 alone, British outlets reported over 6 UK citizens who died in Ibiza—and the circumstances for some of these cases are as strangely mysterious as those in White Lines. One case even follows another DJ who disappeared after reportedly jumping overboard a ship. A first-person account in Metro published in late 2018 added to the concerns over missing or murdered Brits, as the writer explains the complicated legal ropes that their family needed to navigate after a loved one was reported dead in another country.

It’s a heartbreaking experience that mirrors what White Lines’ protagonist Zoe goes through. Here’s hoping that the series—aside from serving as your next big binge—also helps fans become more aware of these issues.

White Lines season 1 is available to stream now on Netflix.