On September 8, 2022, Queen Elizabeth II died “peacefully” at age 96 and Britain entered 10 days of mourning to honor her 70 years of service as the head of the monarchy. The details of her funeral raise the question as to where the Queen will be buried, and it’s a location steeped in royal history dating back to 1475.

The Queen departed Buckingham Palace for the last time on September 14, 2022. Her casket journeyed to Westminster Hall where she would lie for four days before a State Funeral on September 19, 2022. Her son and his wife, King Charles III and Queen Consort Camilla Parker Bowles, her daughter Princess Anne, her second son, Prince Andrew and her grandchildren Prince William and Harry walked behind the coffin as it made its way past London’s landmarks before arriving at Westminster Hall, the oldest part of the Palace of Westminster. It’s believed one million people lined the route to pay their respects, while others waited in line for up to 14 hours to bid farewell to their beloved monarch with a simple “thank you, ma’am” upon reaching her coffin.

On September 25, 2022, Buckingham Palace released a photo of the Queen’s final resting place following her internment at St. George’s Chapel on September 19. “A photograph is released today of the ledger stone now installed at the King George VI Memorial Chapel, following the interment of Her Majesty Queen Elizabeth. The King George VI Memorial Chapel sits within the walls of St George’s Chapel, Windsor,” the Instagram caption said. A ledger stone is an inscribed slab to mark the final resting place of a significant figure. Queen Elizabeth’s parents George and Elizabeth are seen on the left, while the late monarch and her husband Philips’s names are etched on the right. You can also see wreaths and flowers left in the memorial.

Where was Queen Elizabeth buried? 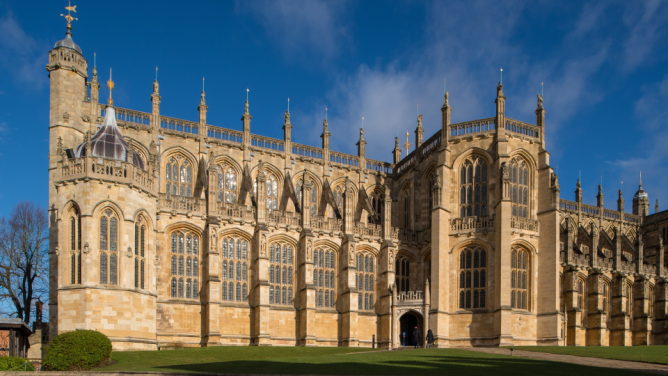 Queen Elizabeth was buried among her family at St. Georges Chapel at Windsor Castle, specifically in the 200-year-old Royal Vault underneath the King George VI Memorial Chapel. This took place following a State Funeral at Westminster Abbey on September 19, 2022, which attracted hundreds of thousands of people lining the funeral route from London to her final resting place at St. George’s Chapel in Windsor. There, there was a Committal Service open to the queen’s past and present staff. Then, her coffin was lowered into the vault. There was another private burial service in the evening attended by the royal family and close acquaintances only.

Elizabeth was reunited with her sister, Princess Margaret, her father, King George VI, and her mother, Queen Elizabeth the Queen Mother. Elizabeth’s beloved husband Prince Philip, the Duke of Edinburgh, was stored temporarily in the vault after he died in April 2021 to await his wife’s death, but he was moved to lay by her side. The Royal Vault homes some 25 coffins, the most notable of which belong to King George III, the monarch that oversaw the secession of the United States during the American Revolutionary War from 1775 to 1783. Recently, though, its function has been to temporarily house royals who’ve passed until a suitable grave can be prepared. The beautiful St. George’s Chapel dates to 1475 when it was founded by King Edward III and was expanded significantly in the late 15th century. The large structure has since served as the final resting place for more than 65 royals in various crypts. While the Queen’s death is a time of sadness, the chapel has also been the site of many happy occasions. Royal weddings, including King Charles III’s marriage to Camilla in 2005, Prince Harry’s marriage to Meghan Markle in 2018, and Princess Eugenie and Jack Brooksbank in 2018 were held there, as well as the unveiling of Meghan and Harry’s firstborn, Archie, to the public.

How was Queen Elizabeth buried? 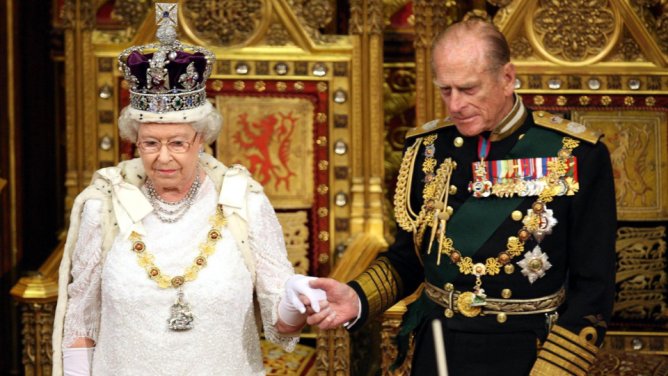 The word “buried” is a bit of a misnomer because the only soil to touch Queen Elizabeth’s coffin was “a ceremonial silver bowl of red earth scattered by King Charles III during her funeral (Elizabeth similarly scattered red earth on the casket of her father King George VI),” The National Post reports. Instead, she will be housed in a stone crypt in an airtight, lead-lined casket to slow decomposition. And what about the Queen’s jewels? Her collection of jewelry is said to comprise 300 items, including 98 brooches, 46 necklaces, 34 pairs of earrings, 15 rings, 14 watches, and five pendants. It’s common for royalty to be buried with their valuable belongings. Egyptian pharaohs, for example, were mummified with amulets and jewels in addition to other belongings, sometimes even their human servants, with the idea that these things would accompany the deceased to the next life. It’s predicted that Queen Elizabeth, however, will keep things simple. According to Lisa Levinson, head of communications at the Natural Diamond Council, the Queen’s body will be interred with few priceless possessions. “Her Majesty is an incredibly humble woman at heart who is unlikely to be dressed in anything but her simple Welsh gold wedding band to rest and a pair of pearl earrings,” she told Metro.co.uk. Mok O’Keeffe, a member of the LGBTQ+ royalist group GayAristo, agreed, saying that the Queen’s wedding bands are likely all she’ll need. “This simple act of love seems fitting for a woman who actively enjoyed the simple things in life and, because of her strong faith, believed that she would enjoy the riches of heaven,” he said. “Many of the jewels she wore form part of the history of the country and will be passed to the future Monarch and the Queen Consort, for the remainder of their lives.”

One such piece is the Imperial State Crown, which you may have seen lying on top of the Queen’s coffin as it made its way down The Mall during the procession on September 14. It’s made of gold, silver and platinum, decorated with 2,868 diamonds, 269 pearls, 17 sapphires, 11 emeralds, and four rubies. Though the present-day design dates back to the coronation of King George VI in 1937, some jewels are nearly 600 years old. The crown was altered for Queen Elizabeth II for her own coronation in 1953. “You see, it’s much smaller, isn’t it? It would have been up to about there when my father wore it,” she said in a BBC documentary made in 2018, pointing to the top of the diamond-encrusted orb on top. It weighs 2.2lbs and though it has never been appraised (or insured, for that matter, eeep!), some experts believe it may be worth somewhere between £3 to £5 billion (upwards of $3.4 billion).

The Imperial State Crown will pass to King Charles III to be worn at the end of his coronation as he leaves Westminster Abbey, as is tradition. We don’t have a date for that yet, though per the Telegraph, the ceremony is expected to be held in 2023 in spring or summer. It could even take place on the 70th anniversary of his mother’s coronation on June 2 which would be a nice touch. Outside of coronations, the Imperial State Crown is used during other State occasions including the annual opening of Parliament. Otherwise, it resides alongside other Crown Jewels at the Tower of London Museum.