Warning: This article mentions sexual assault. After he was convicted in February 2020 on two charges of committing a criminal sexual act in the first-degree and third-degree rape, it’s fair to wonder where is Harvey Weinstein now? An investigation into the former film producer’s history of sexual misconduct and abuse was first exposed on October 5, 2017, with a groundbreaking investigation by New York Times reporters Jodi Kantor and Megan Twohey.

The exposure of Weinstein’s slimy behavior sparked a larger conversation about the abuses committed by men in power and helped ignite the #MeToo movement. Kantor and Twohey’s co-authored book She Said, tracks their months-long examination into Weinstein’s slimy behavior behind closed doors and it was immortalized on the screen in a film by the same name, starring Carey Mulligan and Zoe Kazan as Twohey and Kantor respectively. Thanks to the dedicated work of these two New York Times reporters, the former head of Miramax is serving out a 23-year sentence in a Californian maximum-security prison. Read on to find out exactly where Harvey Weinstein is now and what he thinks of the She Said film.

Where is Harvey Weinstein now?

Where is Harvey Weinstein now? The disgraced former film producer is held at the Twin Towers Correctional Facility in Los Angeles under booking number 6217733. It’s a maximum-security prison built in 1997 with a maximum capacity of 9,500 prisoners. He’s already serving a 23-year prison sentence, after being convicted on two charges of committing a criminal sexual act in the first-degree and third-degree rape in New York, but he also faced criminal charges in California, where he was extradited in July 2021. 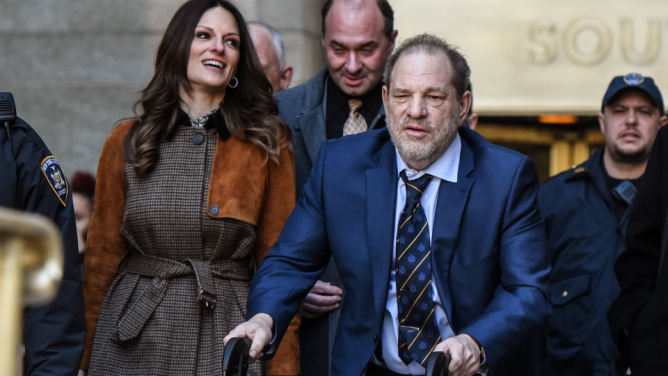 On December 19, 2022, a Los Angeles jury found Weinstein guilty of rape but overall, delivered a mixed verdict after deliberating for nine days. He was convicted of raping and sexually assaulting an actress in 2013. In total, he faced seven charges—two of rape and five of sexual assault—stemming from accusations involving four women from 2004 to 2013. He was found guilty of three, rape, forcible oral sex and sexual penetration, involving an Italian actress who testified Weinstein attacked her in 2013.

One of his accusers was the wife of Californian governor Gavin Newsom, Jennifer Siebel Newsom. Newsom testified on November 14, 2022, that she was raped by Weinstein in 2005 when she was an up-and-coming actor and producer. She remembered being introduced to Weinstein at a gathering at a hotel during a film festival. “Harvey Weinstein was more powerful than me,” Newsom told the jury, according to Variety. “He was like the kingmaker. He was the top of the industry.”

She continued: “Harvey Weinstein introduced himself to me. He came directly to me and people sort of backed off. He wanted to know who I was, what my name was, why I was there.” She continued, “I felt a bit intimidated. He was charming. He treated me initially like he was really curious about me.” After briefly meeting, Weinstein asked to meet up with her later. “I felt like I had to, like ‘Okay, sure,’” she said. “I felt like there was a genuine interest in talking about my work.” When she arrived at the hotel, Weinstein’s assistant said the meeting would take place in his suite. “I was confused. I was a little hesitant. I was expecting to meet him where the noise and the buzz was and there was all this conversation. I was just confused and I didn’t know what to do,” she said. She then described the alleged assault that occurred at the Peninsula Hotel in Beverly Hills. “I was afraid of what he was doing, putting his body into my body, and hurting me,” she said. She also accused Weinstein of forced oral sex. “I’m crying, I’m trembling, I’m shaking and I’m frozen, too.” On this specific charge, the LA jury could not decide, nor could they agree on one count stemming from Lauren Young, a model and screenwriter. The jury also acquitted Weinstein of sexual battery involving a massage therapist.

Prosecutors will now have to decide whether they pursue a retrial for Newsome and Young. Newsome said during a press conference that she felt confident Weinstein would never be released from prison. “He will spend the rest of his life behind bars where he belongs,” she said in a statement. “Harvey Weinstein is a serial predator and what he did was rape.” Weinstein faces the possibility of 18 to 24 years behind bars in California. He would serve time after completing his sentence in New York, of which there are 21 years left unless an appeal is successful.

Deputy district attorney Marlene Martinez said during her closing statement that Weinstein “was a predator, and, like all predators, he had a method.” She detailed how the once “titan” of the film industry would insist on meeting aspiring actresses in his hotel rooms under the guise of helping them professionally. “Confined within those walls, victims were not able to run from his hulking mass,” she said, per the New York Times.

More than 80 women have accused Weinstein of non-consensual sex for nearly three decades. Ashley Judd is another high-profile actor who has come forward. But according to Twohey and Kantor, Weinstein had been paying off his accusers for years. Their investigation revealed the former king of Hollywood had reached settlements with eight women, including a young assistant in New York in 1990, an actress in 1997, an assistant in London in 1998, an Italian model in 2015 and a colleague, Lauren O’Connor shortly after. In a statement to The Times on October 5, 2017, Weinstein said: “I appreciate the way I’ve behaved with colleagues in the past has caused a lot of pain, and I sincerely apologize for it. Though I’m trying to do better, I know I have a long way to go.” 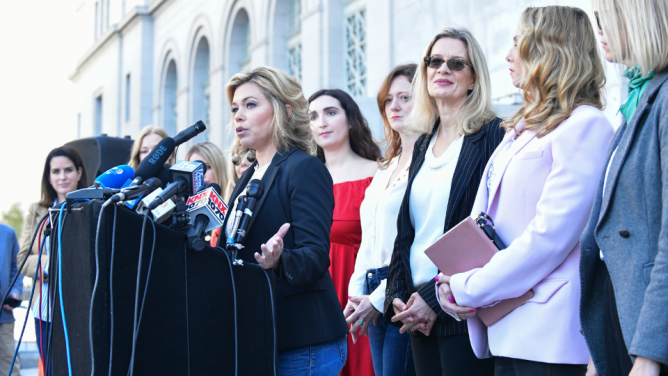 While their investigation and the resulting book were a pivotal key to bringing Weinstein down and igniting the #MeToo movement, the film’s performance has been disappointing at the box office despite receiving solid reviews. It opened to a “dismal” $2.2 million on opening weekend, according to Variety, which is one of the worst wide-release openings for a major studio film this year and a particularly poor result for a project that cost $30 million to produce. After She Said debuted in theaters, a spokesperson for Weinstein reached out to the industry magazine to gloat on behalf of the convicted rapist. “The film She Said bombing isn’t a surprise,” said Weinstein’s spokesperson, Juda Engelmayer, per Variety. “Movie watchers want to be entertained, especially now. Details of the investigation, the #MeToo movement, the story of Weinstein and the accusers, has been told over and over again these past five years and it is clear that there was little worth paying to see it here. Harvey, the film producer and distributor, would have known that.”

Since his conviction in 2020, Weinstein has been granted an appeal in New York and could face court in 2023. His legal team has argued that certain testimony allowed at trial was improper and a juror who wrote a novel about “predatory older men” should have been disqualified, according to ABC News. A spokesman for Weinstein said in a statement that the court’s decision “demonstrates that there is, in fact, merit to the appeal. There was plenty wrong with the trial and conviction and Harvey’s attorneys will do what is needed to prove his innocence of the charges,” according to the news outlet.

“I do think it’s important to note he has already lost one challenge to his New York conviction. His defense team had argued that there was a biased juror, that the prosecution was allowed to put in too much prior bad acts evidence at his sentencing hearing, and those arguments were all thrown out. So he has lost this argument before,” LA Times reporter James Queally told NPR in October 2022. “If he were to be successful on that appeal in New York, then the only other venue in which he’s currently facing criminal charges is Los Angeles. So, this trial would ultimately determine if he’s going to be free at any point for the rest of his life.”

She Said is in cinemas now.

If you or someone you know has experienced sexual violence, call the National Sexual Assault Hotline at 1-800-656-4673. 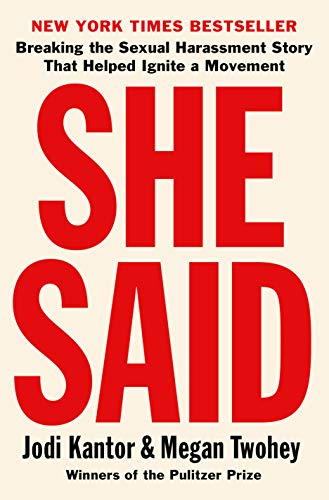 If you want to read the story behind the public downfall of Harvey Weinstein, you need to read She Said by Jodi Kantor and Megan Twohey. This classic piece of investigative journalism began in 2017 and the reporters at the time had no idea what sort of Pandora’s Box they would unleash with months of confidential interviews. They spoke to top actors, former Weinstein employees and other sources about long-buried allegations against the former head of Miramax and The Weinstein Company, the film studios responsible for producing classics such as Good Will Hunting, Kill Bill, and Shakespeare in Love. After publishing their first piece on October 5, 2017, women from all over the world came forward with their stories, shedding light on shadowy settlements, secret payouts and nondisclosure agreements that kept Weinstein’s abuses private, only rumored about, for decades. She Said is an amalgamation of all their hard investigative work over 320 riveting pages.