After a surprise announcement that he would be taking a break from the Tampa Bay Buccaneers, many football fans are asking: what’s wrong with Tom Brady?

On August 11, 2022, Buccaneers coach Todd Bowles announced that Brady would be taking a break during training and the first two games of the pre-season. “Tom has been excused today. He’ll be taking—he’ll be back somewhere around after Tennessee,” he said referring to the second preseason game on August 20, “He’s going to deal with some personal things.” This marks the first time Brady is taking a break as a starter other than the times that he was suspended in 2016 and had a knee injury in 2008.

Tom Brady initially announced his plan to retire from the NFL after over two decades in February 2022 after the Buccaneers lost to the Los Angeles Rams during the playoffs prior to the Super Bowl. However, the seven-time Super Bowl champion retracted that statement in a tweet a month after he announced his retirement. “These past two months I’ve realized my place is still on the field and not in the stands. That time will come. But it’s not now. I love my teammates, and I love my supportive family. They make it all possible. I’m coming back for my 23rd season in Tampa. Unfinished business LFG.”

It looks like this break may have to do with his initial retirement plans. Keep on reading below on why Tom Brady is taking a break for August 2022.

What’s wrong with Tom Brady and why is he taking a break?

The TB Method by Tom Brady

Buccaneers head coach Todd Bowles made the announcement about Tom’s break. He announced that Tom would be joining them later due to a couple of “personal things.”

“This is something we talked about before training camp started,” the Buccaneers coach continued. “We allotted this time because he wanted to get in and get chemistry with the guys and go through two weeks of training camp, knowing he wasn’t going to play the first two games. He didn’t want to take away reps from Blaine [Gabbert] and Kyle [Trask] as well as ‘Griff’ [Ryan Griffin] as far as going into these next two games. And it’s something he needs to handle.”

After the announcement, NFL network insider Ian Rapoport joined the Pat McAfee Show to explain Brady’s situation. “It was planned. No one is worried. He’s fine. It’s not — to my knowledge — it is not a medical emergency related to him or, I believe, anyone close to him,” Rapoport explained. “I was told everything is OK. The best description I got about this was that it’s important to find a work/life balance. I don’t know specifically, but my guess is, just judging from the people I’ve spoken with, that you’re kind of in the right area,” Rapoport confirmed. “Like, there is a family thing that I believe is happening — that is good — that he’s not playing football.”

The NFL star always takes input from his wife Giselle Bündchen before he plays. Sources told Hollywood Life that he always considers his wife’s input when it comes to his career, as “conversations with Gisele in the offseason is going to be a major component on if he continues to play in the NFL or not,” per one insider. “After every year that goes by Tom has a conversation with Gisele to see where the family stands on him playing another year or not,” the source added at the time. “And regardless of how this season has ended, this year is looking to be the most important conversation yet. The kids are getting older, and they both want to decide how they really want to spend the next fifty years of their lives. And they are going to have many conversations after the season that are going to be very heartfelt.” It looks like Brady, who shares daughter Vivian, 9, and son Benjamin, 12, with Bündchen, along with son Jack, 14, with his ex Bridget Moynahan, will spend cherished time with the ones he loves.

When is Tom Brady coming back? 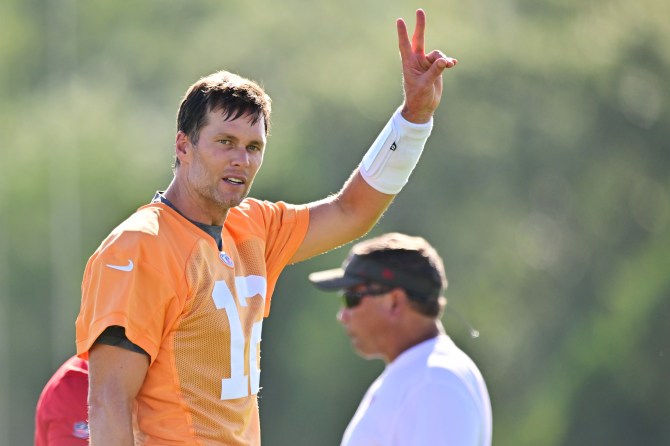 Head coach Todd Bowles specified that Brady will come back after the Buccaneers play the Tennessee Titans on August 20, 2022. The game is the second pre-season game for the Buccs for the 2022-2023 NFL season. “We trust him,” coach Bowles told reporters. “We talked about it. It was scheduled way before training camp and he will not be here until after Tennessee.”

Brady has not publicly addressed his absence. According to reports, the break from training camp will only last for 11 days. He was also excused from practice for personal reasons last Friday — two days after getting a scheduled day off for his 45th birthday. Tampa Bay opens the preseason Saturday night against the Dolphins. The Bucs will also travel to Nashville for two days of practice ahead of their game against the Titans.