Talking about your sexual past can be awkward. You probably don’t want to think about the person you’re dating sleeping with other people, but it’s critical to ask the important questions: When were you last tested? Do you have condoms? How do you like to be touched? Other, less practical, subjects can also come up—one of them being the number of people you’ve slept with.

Anyone remember that famous scene from Friends when Monica finds out Richard has only slept with two women? “You make it sounds like a whole fleet,” he says after inquiring about her number. “Well, it is definitely less than a fleet!” she says, before darting into her bedroom and closing the door.

Ever wondered what people think about your number? Science has some interesting answers. Dr. Ed surveyed over 1,000 Europeans and Americans of various ages about their sexual histories and feelings about sexual promiscuity (or lack thereof). Researchers asked respondents about past partners, opinions about “appropriate” numbers of sex partners, and whether they would lie to a partner about their own “number.” 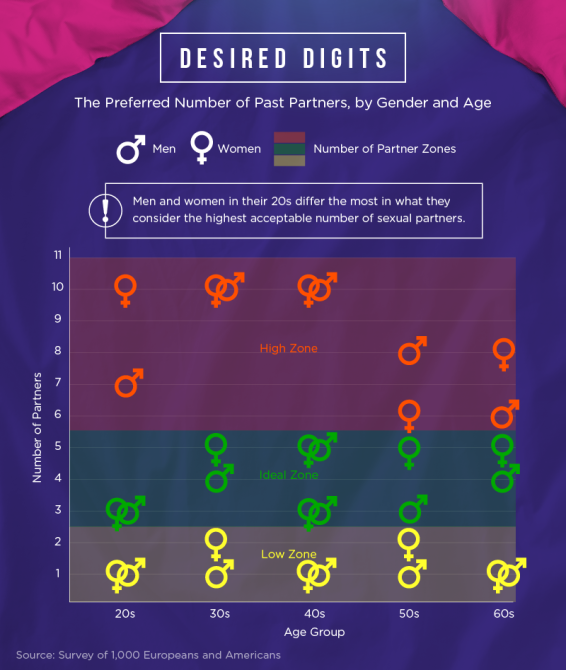 29 percent of those surveyed report that you never have to disclose your sexual history to a partner. As we move more towards a more sex-positive culture, the number of people you’ve slept with will (hopefully) matter less and instead, the only thing of consequence will be if you have sex safely. However, 54 percent of Americans think you should disclose your sexual history before sleeping together. 39 percent of US citizens reported that sexual past doesn’t matter and one in four reported that they’d never been asked how many people they’d slept with. Snaps for the sexually liberated!

Of those who participated in the study, men and women in their 20s both agree that three sexual partners is the “sweet spot.” In fact, all age groups netted out at three to five sexual partners in their proverbial green zones. You can have as many or as few sexual partners as you want, but if you’re going to stick to three, you better make sure you have a LOT of sex with those three people (after all, practice makes perfect). 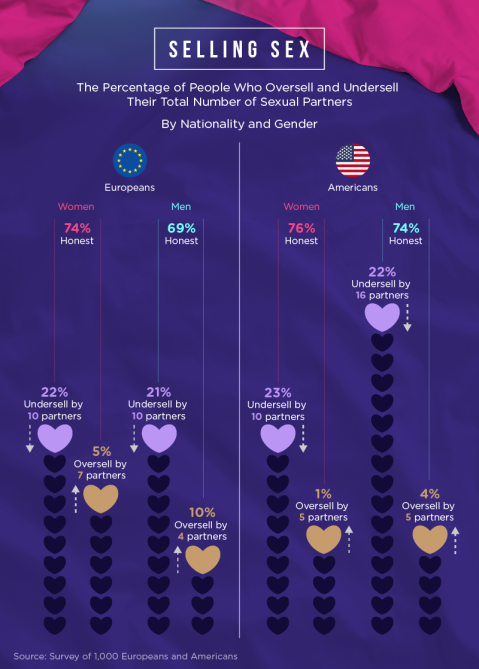 MORE: How to Tell a New Partner About an STD

According to the survey, men in their 20s are unsurprisingly slut shame-y compared to their female counterparts. Results found that anything over seven sexual partners would be considered too high for the average dude. In fact, women were significantly more likely to keep their numbers to themselves for fear of sexual shaming. Looks like we still have a long, long way to go when it comes to closing the gender sex-shaming gap.

Speaking of ladyfolk, women in their 20s were much more forgiving, reporting that ten or more sex partners would be “high.” Both sexes evened out in their 30s, where both groups agreed that more than 10 partners would be considered a lot. Super awkward for the more promiscuous among us! I couldn’t count my number of sexual partners if my entire life depended on it. Apparently, I’m in the minority, as only 2.6 percent of women report not knowing their number. I have yet to receive a complaint from a partner, I might add.