Now that Station Eleven has landed on HBO Max, many are wondering what they can expect from the limited series. Billed as a dystopian drama, the show is surprisingly different—and far more hopeful—than many within its genre. So, what is Station Eleven about exactly?

Well, take it from the showrunner himself: “It’s a show about a small group of interconnected people before, during and after a pandemic,” Patrick Somerville recently told Entertainment Tonight, adding that the “fault line at its center is this major catastrophe.” Yet Station Eleven is more comparable to shows like The Leftovers—another fan-favorite on HBO—rather than post-apocalyptic dramas such as The Walking Dead, as it explores more existential questions about humanity and meaning even in the face of catastrophe.

If you’re wondering why so many fans think that this show about a fictional pandemic is still worth watching in the midst of our real one, keep on reading ahead; we have a feeling you’ll be pleasantly surprised to see what Station Eleven is really about.

What is Station Eleven based on?

Station Eleven, a 10-part limited series from HBO Max, is based on a 2014 science fiction novel by Emily St. John Mandel of the same time. The book—which has sold more than 1.5 million copies to date and won the Arthur C. Clarke Award, among others—experienced a renewed surge of interest in 2020 and 2021 following the events of our current global crisis. And that’s because the story itself revolves around a fictional pandemic and its aftermath, making HBO’s Station Eleven perhaps the most timely show on television today. 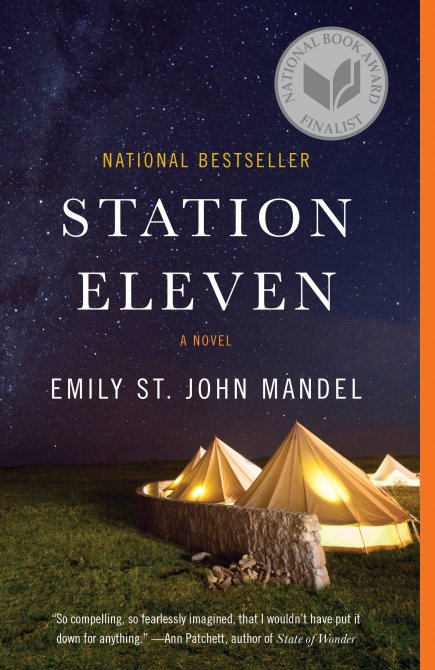 Of course, the limited series is premiering at a time when its themes are likely to hit rather close to home for viewers. Still, that doesn’t mean that Station Eleven will leave audiences already fatigued by the pandemic feeling even worse after watching. If anything, critics are heralding the series as a momentary balm after nearly two years in a pandemic of our own. Viewers can go into watching Station Eleven knowing that the novel itself is anchored by hope despite the difficulties surrounding its characters.

“It’s a story where civilization collapses, but our humanity persists—maybe there’s something there that people wanted to absorb,” author Mandel told Esquire recently. “At the same time, at the beginning of the pandemic, I remember the difficulty of adapting to a life of pure uncertainty. I wanted clues about how this might go, or how it might end. I wanted certainty about the future. Maybe that’s why people reached for Station Eleven, to try to force ourselves to confront what could happen.”

What is the Station Eleven book about?

Station Eleven follows a group of characters navigating the start and aftermath of a devastating pandemic, which is sparked by an illness known as the Georgia Flu. The novel begins with a staging of Shakespeare’s King Lear, during which a famous actor named Arthur Leander drops dead in the middle of the performance. While his death is first believed to have been caused by a heart attack, it quickly becomes clear that the actor was one of the Georgia Flu’s earliest victims.

The plot follows a whole host of characters who are linked—in one way or another—to this very moment. There is Jeevan, an audience member who attempts to resuscitate Arthur and eventually takes in Kirsten, a child actor who was a part of the production of King Lear and ends up separated from her parents in the ensuing aftermath. Readers also get to know Miranda, Arthur’s ex-wife and the creator of a sci-fi comic book, which the novel and subsequent HBO series are named after.

Other characters include members of the Museum of Civilization and a group known as the Traveling Symphony, nomadic creatives who strive to maintain centuries of art and culture in the wake of this global collapse. Their mission points to Station Eleven’s central theme, which is that to live for survival alone isn’t really a way of living at all—and that art and expression, above all else, give us a reason to stay alive each day.