By now, most of us have heard Dune, a.k.a Timothée Chalamet and Zendaya’s new sci-fi epic. But what is Dune about and based on? Well, let us explain what to know about Hollywood’s next sci-fi blockbuster.

What is Dune based on?

Dune, which premieres on October 22, 2021, is based on Frank Herbert 1965 sci-fi novel
of the same title. There are six books in the Dune saga: Dune, Dune Messiah, Children of Dune, God Emperor of Dune, Heretics of Dune and Chapterhouse: Dune
. The Dun book, which was originally published as two serials in Analog magazine (many of Herbert’s other Dune books were also published as magazine serials at first), went on to tie with Robert Zelazny’s This Immortal for the 1966 Hugo Award. Along with a Hugo, the book also won the first-ever Nebula Award for Best Novel and was cited as the world’s best-selling science fiction novel in 2003 after a miniseries re-sparked interest in the book (more on that in a bit.) 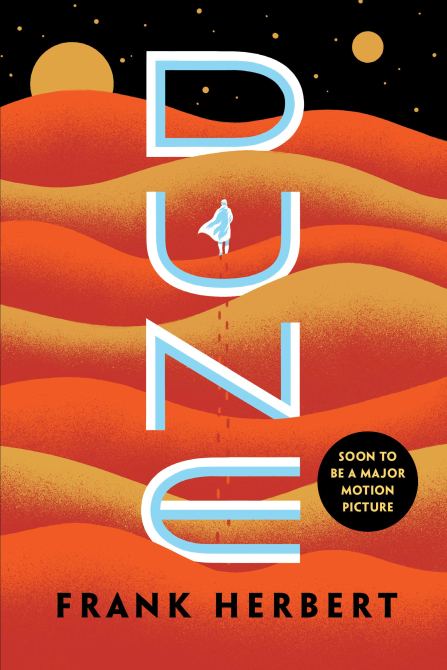 This year’s Dune movie—which stars Timothée Chalamet, Zendaya, Oscar Isaac, Rebecca Ferguson, Josh Brolin, Dave Bautista and other household names—will be the first part of a two-part film adaptation of the original 1965 Dune book. The film will cover the first half of the book, while the sequel, which hasn’t been filmed yet, will cover the second half of the book.

Along with 2020’s Dune, Herbert’s novel was also adapted into a film in 1984 directed by David Lynch. The film, however, was considered a box office bomb and was negatively reviewed by critics. Despite the negative response, Hollywood didn’t stop adapting Herbert’s dune series. In 2000, Sci-Fi created a miniseries, titled Frank Herbert’s Dune, based on the first Dune book. A second miniseries, titled Frank Herbert’s Children of Dune, followed in 2013. The sequel series combined events from Herbert’s Dune Messiah and Children of Dune. Computer games and board games inspired by the book series also followed. There were also several Dune follow-ups at the time, including prequels and sequels, co-written by Herbert’s son, Brian Herbert.

What are the Dune books about?

To be excited for the Dune movie, we first have to understand what the Dune books are about. Set in an interstellar society in the distant future where noble houses control planetary land, Dune
is centered on a young man named Paul Atreides (played by Timothée Chalamet in the 2021 movie), whose family accepts the stewardship of a planet called Arrakis. Though Arrakis is inhospitable and a desert wasteland, it is the universe’s sole source of melange a.k.a. “the spice” a.k.a. a drug that extends one’s life and enhances their mental abilities. Melange is also crucial for space navigation, which requires mental multidimensional awareness and foresight that only the drug can provide. Given that melange is only produced on Arrakis, control of the planet is dangerous but coveted. As Dune follows Paul’s story, the book explores a multi-layered struggle of politics, religion and ecology over the control of Arrakis and the coveted melange.

The full title of the 2021 Dune movie is Dune: Part One, which means that there is a Dune 2.  The 2021 Dune is the first part of a two-part adaptation of Frank Herbert’s 1965 book, Dune. “I would not agree to make this adaptation of the book with one single movie”, director Denis Villenueve told Collider in 2019. “The world is too complex. It’s a world that takes its power in details.” Cinematographer Greig Fraser also confirmed to Collider that a sequel is in the works. “It’s a fully formed story in itself with places to go. It’s a fully standalone epic film that people will get a lot out of when they see it,” he said.

Villenueve also told Il Venerdì di Repubblica, an Italian magazine, that Zendaya’s character, Chani, is expected to have a larger part in Dune 2. “I can’t wait to shoot the second part of Dune to get [Timothée Chalamet and Zendaya] back together. Knowing that in the next chapter Zendaya will be [a major part] of the story,” he said. He also confirmed to GamesRadar in August 2021 that he’s started writing the script for Dune 2.

“I’m writing [Part Two] now, and I feel like I’m eight years old again. That’s very uncommon for me. It’s the first time I’ve experienced it where I’m watching one of my movies, and I have a moment of deep gratitude, of deep joy, and I say, ‘Thank you, life, for having allowed me to bring that to the screen.’ [laughs] I don’t know how other people will feel about it. But me? Denis Villeneuve when he was 14 years old? Thank you,” he said.

Dune is available to stream on HBO Max. Here’s how to watch it for free.