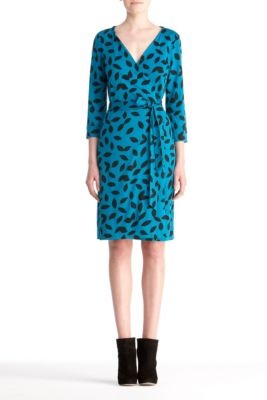 Behind every iconic dress lies an inspiration, and sometimes that inspiration may be less than conventional (or positive for that matter).

Take designer Diane von Furstenberg, for example, whose iconic wrap dress catapulted her to success in the ’70s, and has served as a touchstone for her brand ever since. In a new interview with Vogue UK, the designer reveals that the design had an unlikely inspiration: her divorce.

The end of her marriage to Prince von Furstenberg apparently forced the designer to come to several realizations. Firstly, she knew that she did not want to be recognized as a socialite, and secondly, she knew she was determined to achieve her own independence.

Enter: the wrap dress. The concept was versatile, feminine, and exuded the kind of confidence that defined the new, independent woman of the ’70s and ’80s. It was a symbol of von Furstenberg’s new sense of independence, and was a way for her to instill that feeling in other women. The dress skyrocketed in sales instantly and became a classic staple in women’s wardrobes. “Usually the fairy tale ends with the girl marrying the prince. But mine started as soon as the marriage was over,” von Furstenberg quipped.

After her battle with cancer in the mid-’90s, the American designer returned to the fashion scene and continued to evolve the wrap dress, cementing her permanent and influential presence in the fashion world. The wrap dress has certainly achieved an iconic status since its birth, and will be forever synonymous with the Diane von Furstenberg name.