“The Grand Budapest Hotel,” the latest film from beloved auteur Wes Anderson, debuted last week and has so far earned rave reviews for its, “irony, frivolity and unshakable charm.” By all accounts, the film is quirky, colorful, and highly glamorous. In other words, par for the Anderson course.

The writer and director is known for crafting intensely intellectual films that are as compelling visually as they are verbally, and often rely on hyper-realistic imagery and almost cartoonish use of color and contrast to bring his unique vision to the screen.

MORE: 50 Actors Who Turned Down Famous Movie and TV Roles

So it’s kind of inevitable that—while we’re intrigued by plot and character development and stuff—what we’re really looking for are the pitch-perfect fashion moments that we’ve come to expect from Anderson’s oeuvre. The highly-stylized  look of his movies naturally lends itself to fashion stories (after all, who can forget Gwyneth Paltrow as Margot Tenenbaum in a full-length fur coat and a single red barrette?) and most style lovers are always eager to see what the madcap director shows us next. In honor of his newest offering, we put together a chronological gallery of the 12 most memorable fashion moments from Wes Anderson movies!

Anderson’s first film, “Bottle Rocket,” was not a commercial success, but it garnered critical attention, and launched his own career as well as those of Luke and Owen Wilson. The film is about two friends attempting to pull off a number of small-time heists. Unfortunately, they aren’t very talented criminals, which goes a long way towards explaining their hilarious-but-impractical choice of bright yellow jumpsuits as their uniform.

Jason Schwartzman’s Max Fischer, the protagonist of “Rushmore,” is a precocious prep-school student at Rushmore Academy. He writes plays, crushes on his teacher, and flunks all of his classes, despite his borderline-obsessive appreciation for the school.  One of the hallmarks of his status as the school’s unofficial mascot is his pristine school uniform. Unlike his fellow students, Max never loosens his tie or rolls up his shirtsleeves. He does, however, occasionally accessorize his look with a bright red beret.

Gwyneth Paltrow’s Margot Tenenbaum—the character that spawned a thousand fashionista Halloween costumes—is the gold standard for Wes Anderson style. We love everything about her look, from the too-heavy black eyeliner to the stripy tennis dresses to that perfect side-part and accent barrette. And of course, her fur coat (which looks as though it was inherited from an equally glam ancestor) is a legend in its own right.

Similarly iconic is Margot’s brother Chas Tenenbaum, portrayed by Ben Stiller. Chas, like the other two Tenenbaum siblings, was a child prodigy, and his particular specialty is business. However, in the film, he has given up a more typical Wall Street look in favor of a red Adidas tracksuit. Along with his two sons, Ari and Uzi, he is trying to relax more following his wife’s death, hence the matching sportswear.

“The Life Aquatic,” loosely based on the life of Jacques Costeau, follows a marine documentary film crew around the Mediterranean. Fashion-wise, it’s primarily recognized for the red knit caps worn by all the members of the crew, but this shot of Bill Murray and Anjelica Huston also showcases Huston’s ocean-themed formal wear (complete with blue streaks in her hair!), and how hysterically awesome a red beanie looks with a tux.

Similarly amazing are the futuristic wet suits that the crew of Steve Zissou’s submarine don before hitting the water. While it’s theoretically possible that the suits used in the film are functional, they all totally look like they’re in a campy sixties space movie. Also notable, designer Waris Ahluwalia appeared in this movie as part of the crew. That’s him on the left with the camera.

This 13-minute short is a prequel to Anderson’s longer, “The Darjeeling Unlimited.” It follows a brief romantic interlude between two ex-lovers, played by Natalie Portman and Jason Schwartzman. The short is set in Paris, so you already know it’s fashionable, and Portman looks like royalty in her vivid yellow dressing gown. Add that to the fact that she’s totally channeling Jean Seberg’s character in sixties New Wave classic “Breathless,” and you have a fashion masterpiece.

The feature film that goes with “Hotel Chevalier,” may lack Portman’s innate chic, but this still from “The Darjeeling Limited” is a perfect visual summary of Anderson’s classic tragi-comic style. The three Whitman brothers are on a reluctant journey of self-discovery across India, and this moment captures the ludicrous (but graphically beautiful) juxtaposition of their somber neutral suits with the garlands of flowers that they have acquired on their journey. Plus, between Jason Schwartzman’s mustache, Adrien Brody’s Bono-esque sunglasses, and Owen Wilson’s heavily-bandaged face, it’s hard to decide which character looks the silliest while enjoying himself the least. 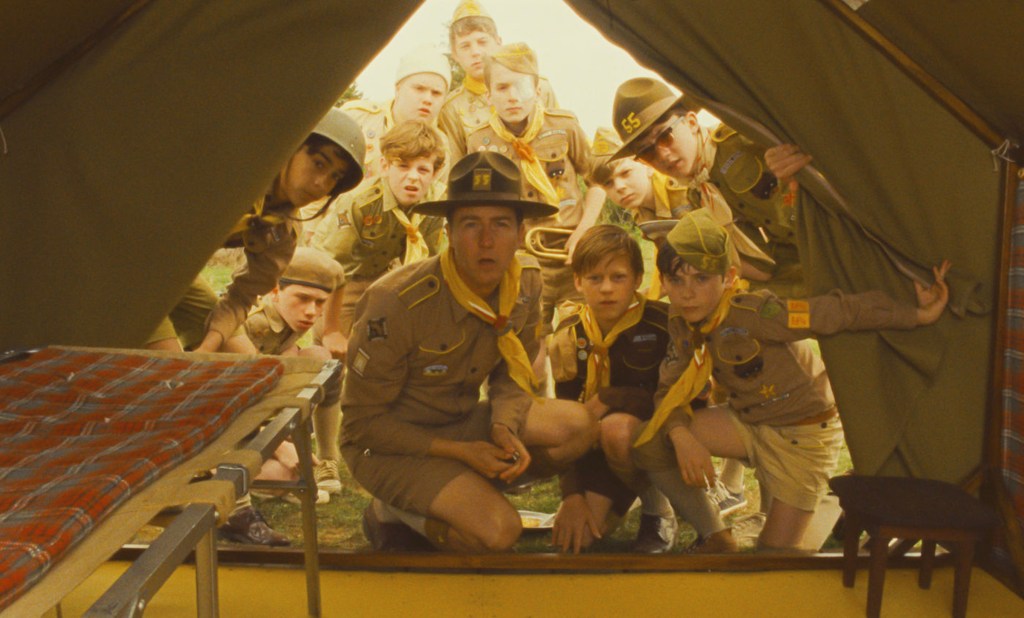 Suzy and Sam, definitely circles back to Anderson’s penchant for a good uniform. A large chunk of the character line-up is made up of Khaki Scouts, Anderson’s answer to the Boy Scouts. They are led by Edward Norton, who plays their long-suffering troop leader, and are, appropriately, fully kitted out in short khaki suits, accessories in various similar shades, and yellow neckerchiefs.

That being said, the sartorial spotlight is definitely focused on Suzy’s amazing sixties frocks. She seems to own about three nearly identical pastel frocks, with contrasting collar and cuffs, and is thoroughly rocking a knee-socks-and-saddle-shoes combo. Also, she brings her turquoise portable record player with her everywhere, in addition to several other pieces of dainty luggage.

One of Anderson’s specialties is finding high-contrast colors, and pushing them to their deepest saturation. In “The Grand Budapest Hotel,” he sets royal purple staff uniforms against the pink-and-red color scheme of the hotel, even to the point of trimming the garments with the same red as walls behind them. The effect is somewhat overwhelming, but undeniably bold and visually appealing. The impeccably tailored menswear is also a great way to showcase just how many different ways a suit can be cut.

That is Tilda Swinton. We repeat, this grandiose, grandmotherly woman is Tilda flipping Swinton. The 54-year old star, who normally seems to defy age, has been transformed for this film into an antique of the Belle Epoque. The film is set in a fictitious European country shortly before the outbreak of World War II, and Swinton looks every inch the washed-up 19th-century dame. Her voluminous hair is reminiscent of Marie Antoinette, and her art deco jewels and mustard-colored robe look like relics of a long-forgotten youth.