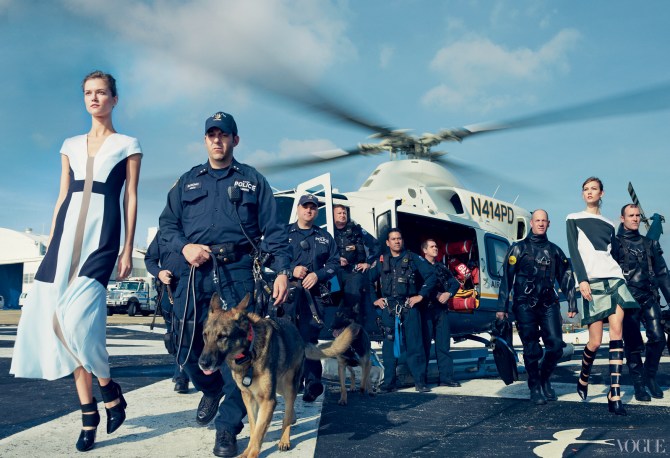 Photo by Annie Leibovitz for Vogue

For the February issue of Vogue, the magazine recruited legendary photographer Annie Leibovitz to celebrate the first responders of Hurricane Sandy, from firefighters to nurses. Vogue being Vogue, the resulting shoot isn’t exactly gritty: In each photograph, real-life first responders are pictured alongside top models like Karlie Kloss and Chanel Iman—all wearing luxurious, high-fashion attire.

As one might imagine, there’s been some backlash regarding the shoot. Slate argued that the shoot “[turned] firefighters, army reservists, and Con Ed workers into props,” and asked: “Did Did Leibovitz not realize that the real, non-model people in her lens were 20,000 times more captivating and alive than the models or the clothes?” Commenters on Vogue.com called the shoot “tacky and tasteless” as well as “exploitative.”  As one might expect, the chatter on social media has been overwhelmingly negative.

Some, however, have come to Vogue‘s defense, saying that the shoot was remarkably sophisticated: Styleite called the shoot “incredible,” and argued that “fashion magazines can seem tone deaf when it comes to dealing with current affairs and larger issues, but in this case […] Leibovitz’s lens conveys the strength of the teams and magnitude of the event with grace.” The Guardian agreed that the shoot wasn’t nearly as offensive as some had claimed.