In the 90s and 00s, we had The Craft and The Crow, but we have not had a young, female gothic character who leads a show for decades. Until now. From her lush, black bangs to her ghostly pallor, Jenna Ortega’s Wednesday Addams is a teen goth queen worthy of her small-screen reign.

Wednesday is beautiful, weird, and funny. She is regularly confused by the norms of life and for all of us who are puzzled by the ever-changing rules of what’s acceptable and not, she’s eminently relatable. Anyone who has survived high school, or is currently battling through their senior years, will understand Wednesday’s dilemma. 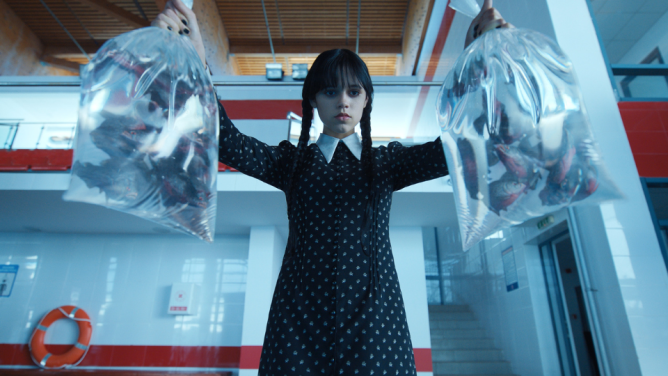 We live in a remix-remake culture with varying degrees of success in reinventing nostalgia for perpetually distracted doom-scrollers. Simply reincarnating The Addams Family would have been a wasted opportunity, and veteran director Tim Burton has gone the full mile to create a contemporary story and context for Netflix’s iteration.

Until now, Wednesday has always appeared as a child in comics, movies and animations. In Burton’s new series, Jenna Ortega is a teenage Wednesday, awkwardly navigating the savage sociocultural complexities of high school and hormones. Even with her witchy mystical powers, her esoteric sensitivities and her unusually eclectic family, Wednesday reflects any of us who have felt like perpetual outsiders. She neither relates to the sporty rich kids, nor the preppy girls with their perfect topknots and tans. She barely tolerates therapy sessions and struggles with her mother’s legacy as a stellar graduate from Nevermore Academy. She is the target of boys’ attention and lust or their belligerence, and neither are particularly interesting to her.

As if navigating the many microtraumas of high school wasn’t enough, Wednesday becomes embroiled in an amateur sleuthing operation to reveal the protagonist behind a spate of local killings. Goth Queen Detective? It’s a mouthful, and it makes for some very juicy, entangled plotlines. It also opens up avenues for supporting characters to reveal their own agendas and twisted personalities.

Headmaster Larissa Weems (Game Of Throne’s Gwendoline Christie) is the nemesis of both Wednesday and her mother, Morticia (Catherine Zeta-Jones), a woman who knows significantly more than she lets on. She is an ominous presence in the spate of deaths now plaguing the town. Wednesday, a sardonically witty super sleuth, is determined to channel her newly discovered psychic powers into solving the mysterious murders. 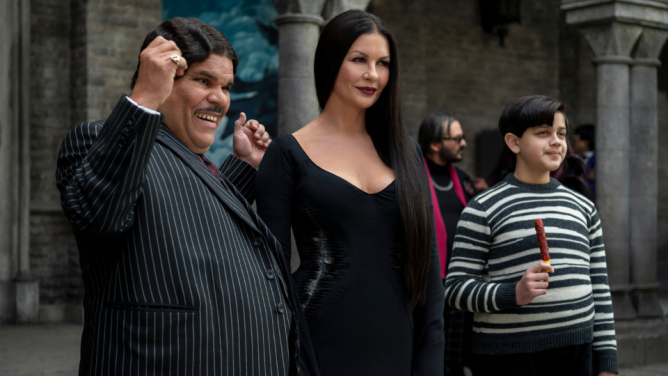 Significantly less malevolent is the bespectacled expert in carnivorous plants, Marilyn Thornhill. The role is played by Addams family alumni Christina Ricci, who shows up to symbolically hand her Addams baton (she was the best Wednesday to date in the 1991 movie The Addams Family) to Ortega. It’s a generous gesture, which Ricci seemingly relishes.

Wednesday’s most vehement nemesis (there are a few, the cost of being the strangest girl in school) is Bianca Barclay (Joy Sunday). Wednesday’s suitor Xavier Thorpe (Percy Hynes) once dated Barclay, and his very evident lust for Wednesday only fuels the rivalry between the super-powered girls. Their awkward teen romance adds a frisson to this already multi-layered psychic, teen horror, family drama. To Burton and his team’s great credit, the series traverses generations. It has enough self-referential elements to appeal to over-40s who were enamored with the original Addams, while boasting a cast of teens and twenty-somethings that represent the new generation of screen idols.

Equally fantastic and dramatic is Wednesday’s fashion. Ortega’s teen goth is a feline, angular, doe-eyed beauty. Let loose in a boutique, she’d be all over Rick Owens, Alexander McQueen and Givenchy. The Latinx goths of Tisci’s 2015 Givenchy runway epitomize the Wednesday fashion mood, and befittingly, Ortega’s own Mexican and Puerto Rican roots are part of her fictional goth girl’s identity too, even if there are no overt references to Latinx culture within the first season, at least.

In the background featurette, Ortega clarified that Wednesday represents Ortega’s own community: “Wednesday is technically a Latina character and that’s never been represented so, for me, any time that I have an opportunity to represent my community, I want that to be seen,” she says.

One of the most appealing qualities of goth girls is that they don’t age out of their dark traits, nor end up bleaching their hair and overcoming their social awkwardness to find a Disney-perfect happy ending with a blonde, surfer dude. Wendy Addams, like Doom Gen’s Amy Blue and Nancy Downs, is not just a goth queen for teens, but the alienated outsider, the sensitive and outspoken female who resonates with women in their 20s, 30s and even 40s. She is, of course, her mother’s daughter and Morticia is the ultimate self-assured, sensuous vamp. Somewhere between the introverted, preternaturally clever Wednesday and her eccentric, effortlessly sexy mother, we all channel something of the Addams’ goth queens. Or we want to. 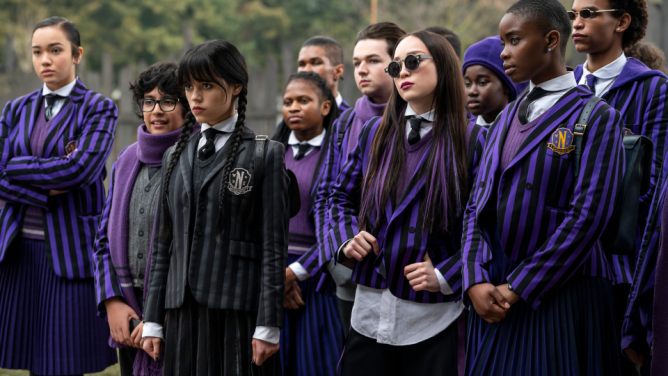 Wednesday satiates our endless desire for independent, sassy, eccentric girls and women on screen. Arguably, in our social-media, plastic surgery-saturated culture, women who epitomize something unusual and unapologetic in their fashion and style are the ones who give us the courage to make our own statements. In recent years, we’ve had The Girl With The Dragon Tattoo‘s Rooney Mara (and Noomi Rapace in the Nordic version) as the ultimate traumatized victim-turned-heroine. She is, like Wednesday, extraordinarily intelligent, observant and dark in spirit, but also driven by curiosity and compassion to connect with those who will enable her to be exactly who she is.

The all-new Wednesday Addams, a beautiful, malevolent, curious and vulnerable mastermind, exists along with a legacy of brilliantly dark, romantic goth icons of the screen. Once you’ve binge-watched Wednesday, I recommend seeking out the following eye candy:

My preference is Noomi Rapace as Lisbeth Salander in the original Swedish film, but Rooney Mara does a fabulous job in David Fincher’s US adaptation. Salander is the ultimate, alienated and misunderstood outsider. She’s Joan Jett-meets-Tankgirl (another fantastic comic book-to-movie adaptation), if you like.

Eric Draven, as portrayed by the inimitable Brandon Lee, is based on the comic book character invented by James O’Barr. After he and his girlfriend are brutally murdered, Draven returns to the world to avenge their deaths. He cannot find peace until he has tracked down and taken out his killers.

A bunch of witchy, badass girls breaks free of their Catholic School Girl limitations to go wild. It looks as good as it sounds. Like Wednesday, it aptly depicts teenage life in which navigating cliques, predatory boys, malicious teachers and demanding parents is significantly more interesting with the introduction of supernatural powers.