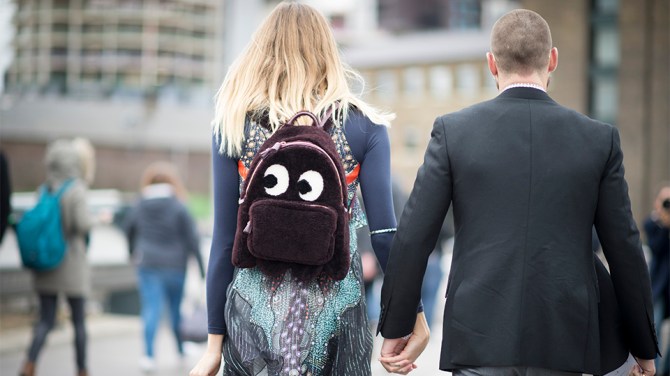 Like the designer bag you got for $10 at a thrift store, love is often found in the most unlikely places. As self-professed suckers for an offbeat meet-cute story, we teamed up with the diamond purveyors at Forevermark—a crew that knows quite a bit about love—to find a few such tales. From a martial arts competition in Bangkok to an early aughts Yelp thread, here are ten unexpected ways people met “the one.”

“I met my boyfriend on Craigslist and ironically, his name is Craig. After breaking up with a guy I’d been with for three years, I decided to get a new apartment. I wanted to meet new people, so I moved into a place I found on Craigslist with one of my girlfriends and the two guys already living there. I was just hoping the guys were sane and not serial killers—I never expected one of them to be ‘the one.’ We hid it from our other roommates for a while because we didn’t want them to feel awkward, but now we’ve been dating for over a year and couldn’t be happier.”
—Hannah, New York 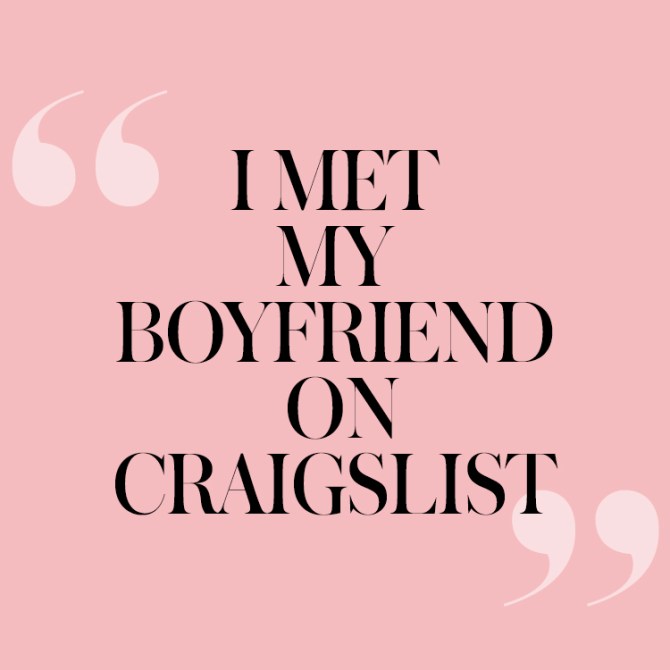 “My husband and I met portraying husband and wife in a local community theater production. We went on to play opposite one another in several more plays until we finally made it real.”
—Angela, Ohio

“I met my husband when I was working as a waitress and his family came into my restaurant for dinner. After learning that I was a musician, his parents introduced me to their hungover musician son, who was with them. I told my co-worker about the family and their cute son, and he went over to their table to ask for his number. I was mortified—I sent them free dessert and hid out in the back until they left. I waited a week, then got the nerve to text him, ‘Your move.’ After a few dates we realized that a mutual friend had tried to set us up a year earlier. I thought his picture was cute then, but couldn’t imagine going on a blind date. We’re now married and expecting a baby.”—Dana, New Jersey 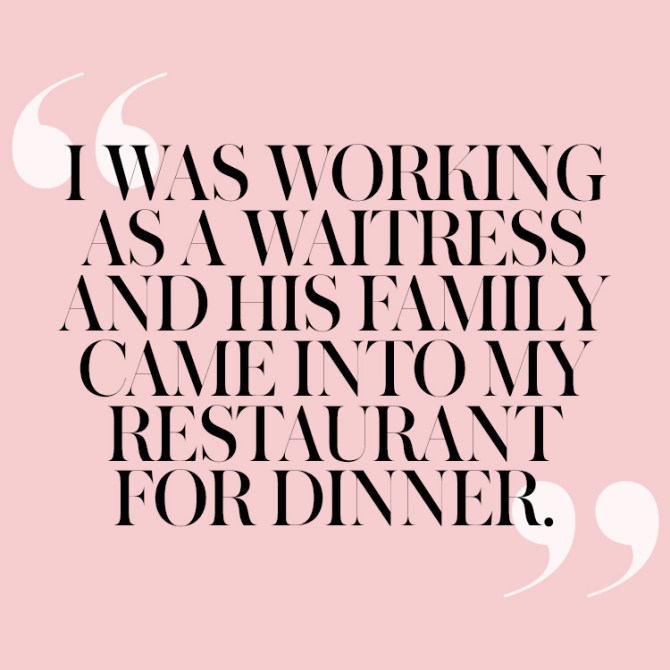 “I initially met my wife at a singles party where we exchanged emails. We went out on three awkward group hangouts before calling it quits. Months later, we reconnected on Google Chat, which led to three more bad dates for a total of six times. The following year I joined OKCupid and my soon-to-be-wife showed up as a top-three match. I was in disbelief—how could she possibly be a match when we went on so many bad dates? But I called her anyway and we had a laugh about our statistical compatibility. She invited me to a holiday party and we had an amazing evening. As I was about to leave, she surprisingly leaned in and kissed me on the lips in front of everyone in the room. I proposed a year later.”
—Amani, New York

“I met my wife eight years ago through Yelp. At the time, there was a thread about an informal dinner group that would go out to a new place every month. One month when the group was headed to a BYOB Indian spot, someone asked what they should bring and my now-wife responded ‘Pepto-Bismol.’ I struck up an internet chat with her and after three months of talking, she asked if I was ever going to ask her out. I was planning to move back to my hometown in Texas and wasn’t looking for anything serious, but I thought, ‘What the hell…’ We’d never even exchanged pics so it was totally a blind date. When she walked in the door, I was floored at how beautiful she was—and she still is. Needless to say, my moving plans changed, and eight months later I was on my knee proposing.”—Tom, New York 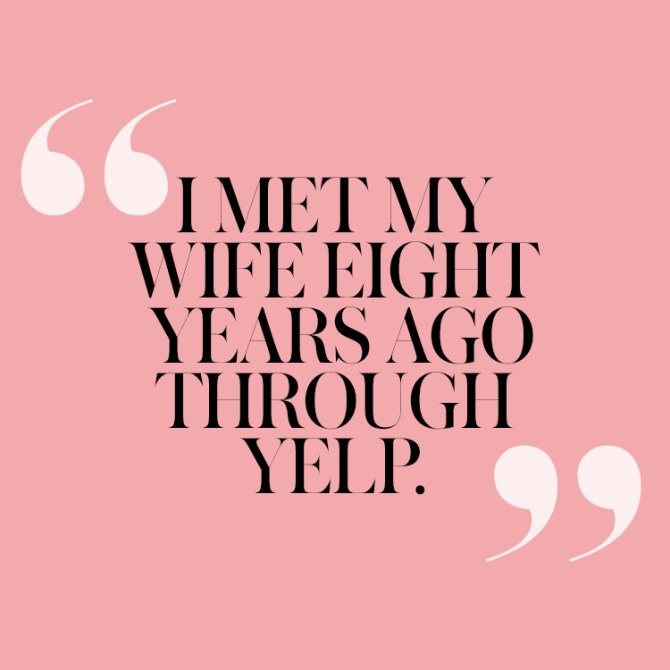 “I was in Bangkok while vacationing through the South Pacific and entered a martial arts competition where my future wife was a spectator. After one of my fights, I headed to the audience and started talking to a very pretty young woman sitting next to me. We got married the following February in Quezon City, a suburb of Manila.”—Mark, Texas

“I met my fiancé at a sushi restaurant in 2009, and from the moment I walked in, I could feel him staring at me. He sent one of his friends over to break the ice and offer my friends and I a bottle of sake, but we shut the guy down. Eventually, my fiancé came over and introduced himself. I didn’t give him a chance until I discovered that we have the same exact birthday! We’ve been together ever since and are getting married this July.”—Lana, California

More: Why I Did My Own Makeup for My Wedding

“I met my now-boyfriend on a plane. I was flying standby and happened to be seated next to him. We were flying to Nashville—I was going for a four-day bachelorette party and he was headed to his cousin’s wedding. An hour into the flight, he introduced me to his parents, who were seated across the aisle from us. Since then, we’ve lost his mother to brain cancer—she was diagnosed one week after we met—moved in together, got a dog, and bought a home in Delaware. It’s been a tough five years and we’ve been through a lot, but I wouldn’t have it any other way. Glad I decided to get on that flight.”—Laurie, Delaware

“No joke, I met my now-wife on an MTV dating show. This was 13 years ago on a show called TailDaters, where our closest friends and family spy on our first date and offer their commentary. But it worked out. We’ve been married for almost five years and she is my soulmate and my everything.”—Chris, California 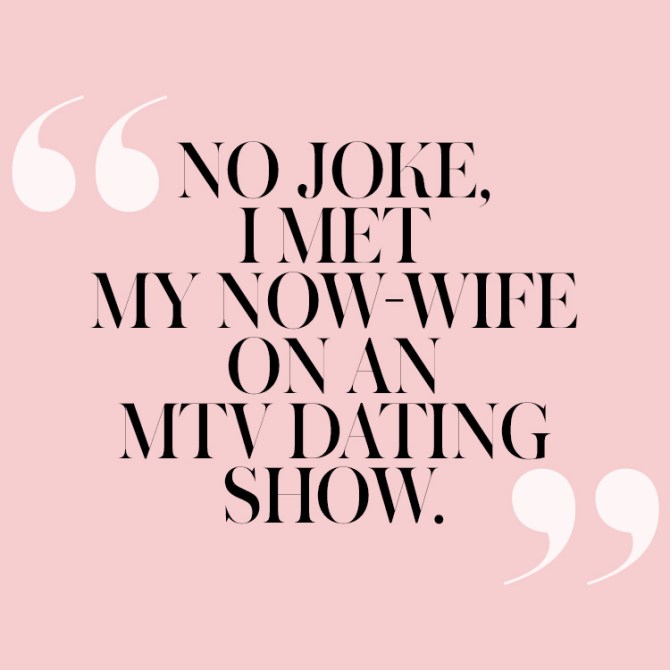 “I had just moved back to San Francisco from the East Coast and was meeting friends on a pub crawl in the Mission. I looked across the room and saw this tall, gregarious blonde-haired guy—kind of Paul Bettany-ish—and thought to myself, ‘Now, why can’t a guy like that like me?’ Well, moments later he came over and we started talking. Now we’re married with a two-year-old. Yes, you can still marry a guy you meet in a bar.”—Jennifer, California