This Is Us premiered on NBC in September 2016. The drama series stars Milo Ventimiglia (Jack), Mandy Moore (Rebecca), Justin Hartley (Kevin), Sterling K. Brown (Randall) and Chrissy Metz (Kate) as members of the Pearson clan, a family of five from Pittsburgh, Pennsylvania, who have more drama than any family should have in their lives. Many of the episodes switch between two timelines: the Pearson siblings (known as the Big Three) in the 1980s as babies, preteens and teenagers and the Pearson siblings in modern day as adults.

The show, created by Dan Fogelman (the writer of movies like Crazy, Stupid, Love and Tangled) has been nominate for more than a dozen Emmys. In 2017, Brown even won an Emmy for Outstanding Lead Actor in a Drama Series for his role as Randall. The show has also averaged more than 10 million viewers each night since it’s premiere.

In May 2021, NBC confirmed that This Is Us would end with season 6. In an interview with STYLECASTER in 2020, Metz confirmed that the show always planned to end with season 6. “We know how it ends. So far, we’re going until season 6, but I think everyone is hopeful that there might be another season or a spinoff,” she said. “I mean, we’re not talking Game of Thrones budget, but this show and the storylines are very intricate, and you want there to consistently be quality. We’ve known sort of from the get go. They’ve always had the timeline of how things were going to unfold. Tings do change because of whether an actor can’t be in the show anymore or they’re pregnant. But we’ve known for mostly the last four years.”

If you feel like the Pearsons are your own family, you may want to know how to watch This Is Us online for free. Read on for how to do just that. 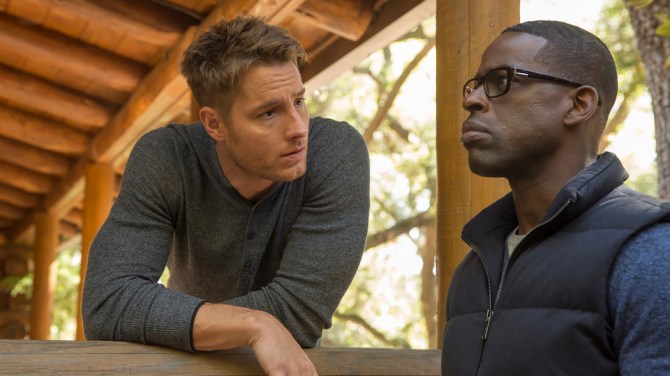 When does This Is Us come back?

When does This Is Us air?

How to watch This Is Us online

How to watch This Is Us online for free

How can one watch This Is Us online for free? Read on for our tips and tricks to stream This Is Us for cheap or free.

Watch This Is Us With Fubo TV’s Free Trial

The best way to watch This Is Us online for free is with Fubo TV’s free trial. Fubo TV offers a seven-day free trial. Along with NBC,  Fubo TV offers more than 100 channels, including ABC, CNN and CBS, at least 250 hour of DVR and a streaming library with hundreds of hours of TV shows and movies. After the free trial ends, Fubo TV costs $64.99 per month, so be sure to cancel it before you’re charged.

Watch This Is Us With Hulu’s Free Trial

Hulu is the most affordable option to watch This Is Us if you can wait a day. The service offers a seven-day free trial and upload new episodes of NBC shows, including This Is Us, less than 24 hours after they air live. Though you can’t watch episodes live (unless you subscribe to Hulu+ With Live TV), Hulu—which offers more than 1650 TV shows and 2,500 movies along with This Is Us—starts at $5.99 per month for its basic subscription with ads. It’s ad-fee plan costs $11.99 per month. Both plans come with a 30-day free trial, so users can test it out before committing to a subscription.

Watch This Is Us With Verizon’s Free Disney+, Hulu & ESPN+ Bundle

If you’re a Verizon customer (or know someone who is), there is another free option. For a limited time, customers with unlimited plans, such as Get More Unlimited and Play More Unlimited, have access to Verizon’s complimentary The Disney Bundle, which includes Disney+, Hulu and ESPN. Disney+ and ESPN are nice, but Hulu is the real reward here to watch This Is Us online for free. So how do you claim your free Hulu subscription? Well, Verizon has a FAQ here that explains the steps a Verizon customer needs to take to access Disney+ for free, but here’s the gist: Go to My Verizon site or the My Verizon App. In the app, go to the Plans & Devices page and click Explore Adds. On the site, choose Account on the top menu and click Add Ons & Apps. There, customers will be able to choose The Disney Bundle, which includes Disney+, Hulu and ESPN. After choosing the bundle, click Get It Now. Enter the email address you want to use for your subscriptions, check your email for confirmation and voila.

Watch This Is Us With Sling TV’s Free Trial

Sling TV’s free trial is an excellent option to watch This Is Us for cheap. Sling offers two plans: Sling Blue and Sling Orange. (Sling Blue is more suited for news and entertainment, while Sling Orange is better for sports and family.) Both include a three-day free trial and cost $35 per month after the trial ends, if one chooses to subscribe. Both also offer 50 hours of DVR and local channels like NBC, which is where This Is Us airs. If you had to choose one, though, we recommend Sling Blue to watch This Is Us. Not only does the plan include more channels, but it also allows the user to stream on three devices (Sling Orange allows only one), which means that you can split the cost with two other people, who can stream on their own devices. (That’s just $3.33 per person.)

Who’s in the This Is Us cast?

This Is Us airs Tuesdays at 9 p.m. on NBC and is available to stream on Hulu. Here’s how to watch it for free.