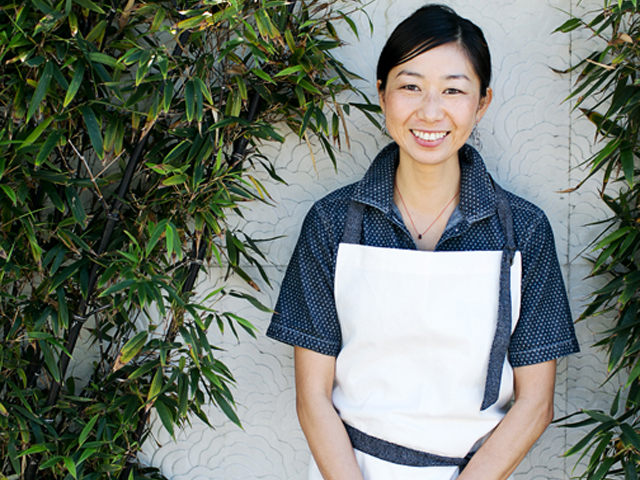 Not many influential chefs have a story quite like Kuniko Yagi. She started her career in banking in Tokyo, but eventually decamped to Los Angeles where she discovered a love for cooking. After a serendipitous meeting with David Myers, then at the helm of the most influential restaurant in town, Sona, Yagi was set on her path, rising through the ranks at Sona, and eventually working on other restaurant projects with Myers including Comme Ça Las Vegas and David Myers Café in Tokyo.
In January 2013, Yagi became Executive Chef of Hinoki & the Bird in Los Angeles, Myers’ latest concept, and the acclaim for Yagi’s food has been rolling in ever since. Bon Appetit named the restaurant as one of 2013’s Top 50 Best New Restaurants. What is most telling though is that when foodies speak of Los Angeles’ burgeoning foodie scene, Hinoki & the Bird inevitably starts the conversation.
We chatted with Yagi about how she discovered her passion for cooking, what she has learned from Myers, and what it takes to be a successful chef today.
The Vivant: So how did you go from being a banker in Tokyo to a chef in Los Angeles?
Kuniko Yagi: I came to the United States because I got married. Then I got divorced, and I needed an occupation, something to do with myself. The funny thing is is that I never enjoyed cooking when I was growing up, but my mother is a great cook. But being a chef was never my dream. Eventually I started working in a noodle shop in Beverly Hills as a server. So that is how I started.
So how did you and David Myers meet?
We had a VIP guest who would come in for lunch at very strange times at the noodle shop—like 4 p.m. I didn’t know what Sona was. Well that guest was David Myers.
At a certain point I decided I really wanted to try working in the back of the house. I didn’t know the L.A. restaurant scene so I went to the bookstore and got a Zagat. I looked up the best restaurants and saw Sona was at the top.
I went and knocked on the front door, I didn’t know any better, and talked to the hostess and then David came out of the dining room, and he recognized me. And that’s when I asked him for a job. He said he would take me on for a trial basis as a back server. Working in a restaurant like that was really like a liquid nitrogen tank in my heart. I worked there for seven days and he totally forgot about me. After two weeks, I went up to him and asked if I could stay on. He said, “OK, I just wanted you to be prepared for how stressful kitchens are,” and gave me my first opportunity.
Then you worked your way up, various projects followed, and now Hinoki & the Bird. Tell us  about conceiving of a restaurant from scratch.
I had never opened up a restaurant before, and I was very nervous. David and I talked a lot about different recipes we were developing. I really did enjoy everything about the experience—building up a team, hiring, calculating prices, designing, figuring out the colors in the restaurant.
What at the restaurant has your particular stamp on it?
I brought back a black cod fish that I had worked on two years ago. The sweet potato and pistachio really bring out the sweetness of the dish.
What have you learned from David Myers about cooking?
I really learned everything from scratch cooking wise from him—how to taste—he really opened my opinions. What I love about working with him is that he doesn’t have an ego—and the dishes on the Hinoki menu are really 50/50.
Tell us about about being a Top Chef contestant this season, why did you do it?
Any publicity and marketing help—I learned that the hard way seeing restaurants that have struggled and closed. That’s why I went on Top Chef—and I’m totally not a TV person—but I believe as a chef today you can’t just hide in the kitchen, you have to show multiple dimensions of yourself.
What’s your favorite dish on the menu at Hinoki & the Bird?
[Laughs] Everybody asks me that question! I really do love everything on the menu. I care just as much about the grilled rice as I do the pickles as I do the lobster roll.
Our mouth is watering! OK, tell us what the most ordered menu on the item is.
It’s the lobster roll. I checked the order list for August recently and we must have sold more than 500 pieces just that month.
Hinoki & the Bird, 10 Century Drive, Los Angeles hinokiandthebird.com
MORE:
Ones To Watch: Victoria Ryann Might Just Be Music’s Next Big Star
Ones To Watch: Kyleigh Kuhn Wants To Change How We Think Of Afghanistan