If you’ve seen the past 11 Halloween movies, you may want to know how to watch Halloween Kills online for free to see whether Michael Myer come back from the dead and whether he’ll be killed once and for all.

In an interview with STYLECASTER in October 2021, Kyle Richards—who played Lindsay Wallace in the original Halloween and reprises the role in Halloween Kills—opened up about what it’s like to return to the same character four decades later. “It was very surreal, because playing Lindsey as a child is very different from playing Lindsey as an adult. Trying to think about where my character is at after all of these years and the experiences Lindsay went through as a child that mold her as an adult. I had to think about all of that going into this. It was a lot of fun. It was fun to be acting again and doing what I love most,” she said.

Jamie Lee Curtis—who played Laurie Strode in the original Halloween and also reprises her role in Halloween Kills—told Vogue in October 2021 that she never predicted that the franchise would run for four decades. “Halloween was never meant to become a franchise until it became one. Nobody involved knew it would amount to anything worthwhile,” she said. “And here I am, 43 years later, still playing Laurie Strode.”

She continued, “To have that movie receive that reaction 40 years after the original was an indescribable experience. What I love about it is that we made it just like the first film. The original was made so fast for so little money by a small group of people, and David similarly lightened the load so we could make these fast and furiously. Nobody got paid upfront, including yours truly. It’s not because we knew we’d make a lot of money on the backend—those numbers were certainly unexpected. And traditionally horror films don’t get great reviews; so given my history with this character, it felt pretty amazing.”

So how can one watch Halloween Kills online for free? Read on for how to stream the new Halloween movie for cheap to see what happens to Michael Myers.

When is Halloween Kills out?

Halloween Kills premieres on October 15, 2021, on Peacock and in theaters.

Where to watch Halloween Kills

How to watch Halloween Kills online for free

Those who want to watch Halloween Kills online for free need to be an Xfinity subscriber (or know someone who is.) Customers who have Xfinity Flex, Xfinity X1, Xfinity Internet or Xfinity Digital Starter TV accounts can receive a Peacock Premium subscription for free—yes, free. Peacock has a guide for how to connect your Xfinity and Peacock accounts, but we also listed the steps below. Cox subscribers, who have Cox Internet Customer with Contour Stream Player or Starter Video, also have access to free Peacock Premium subscriptions. 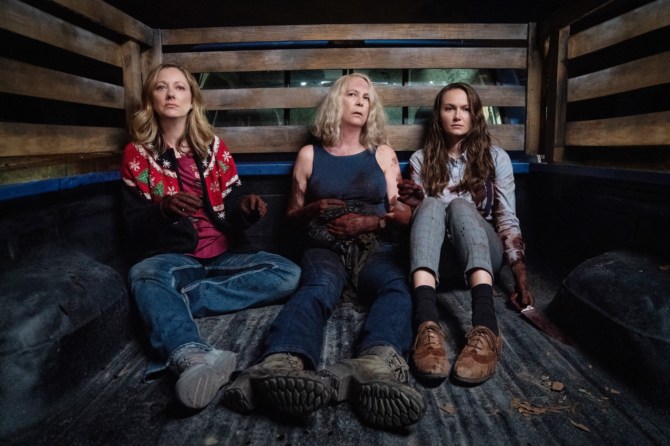 What is Halloween Kills about?

Halloween Kills is the 12th movie in the Halloween franchise, which started in October 1978 with the original Halloween, which follows Michael Myers—a serial killer who was committed to a sanitarium as a child for the murder of his sister, Judith Myers—and his victims. Halloween Kills is the sequel to 2018’s Halloween, which sees the characters from the original Halloween character 40 years later as Michael breaks out of prison and returns to their town of Haddonfield for a killing spree.

The 2018 Halloween ended with Michael trapped inside the house of Laurie Strode—the sole survivor of the original Halloween—as it burns on fire. The post-credits scene revealed that Michael escaped the fire and survived. Halloween Kills picks up where the 2018 Halloween left off, as Michael escapes the fire and sets out to find and kill Laurie, who is injured and taken to the hospital. Instead of backing down to Michael, Laurie inspires the residents of Haddonfield to rise up and fight against Michael to possibly end his reign of terror once and for all.

Who is in the Halloween Kills cast?

Halloween Kills is available to stream on Peacock.