If you want to know what happens after Thanos’ snap was reversed in Avengers: Endgame, you may want to know how to watch Eternals online for free.

Eternals is the 26th movie in the Marvel Cinematic Universe and follows the Eternals, an immortal alien race, who emerge after 7,000 years of life in secret to protect the Earth from their evil counterparts, the Deviants. In an interview with Geek Culture, Chloe Zhao, the director of Eternals, explained that the movie is an exploration of humanity. “I wanted this so badly,” Zhao said of directing Eternals. “I wanted to work with the team at Marvel because I love the movies. With this particular story, I felt like I had something to offer, and it’s a story that addresses questions that I have for myself as a human being, and so I knew the making of that will allow me to grow.”

Richard Madden, who plays Ikaris in Eternals, told Entertainment Weekly how different it was to play a character that was thousands of years old as opposed to a human. “For me, it was the fascination of when you’ve got a character that’s thousands and thousands of years old, what is it about them that makes them want to keep living? What is it about the world around them that they find joy in?” he said. Gemma Chan, who plays Sersi, added, “I was excited about playing this character where I haven’t really seen a superhero like her before. She’s a free spirit. She’s not your typical warrior-fighter kind of superhero. And I was interested in this mix of characters as well, them coming together and [figuring out] what they’re like as a slightly dysfunctional family.”

So how can one watch Eternals online for free and when will it be on Disney Plus? Read on for when Eternals will be free for Disney Plus subscribers and how to stream it at no cost if you don’t have a subscription yet.

When did Eternals come out?

When is Eternals free on Disney Plus?

“Following the tremendous box office success of our summer films which included five of the top eight domestic releases of the year, we are excited to update our theatrical plans for the remainder of 2021,” said Kareem Daniel, Chairman, Disney Media & Entertainment Distribution, said in a statement in September 2021. “As confidence in moviegoing continues to improve, we look forward to entertaining audiences in theaters.” 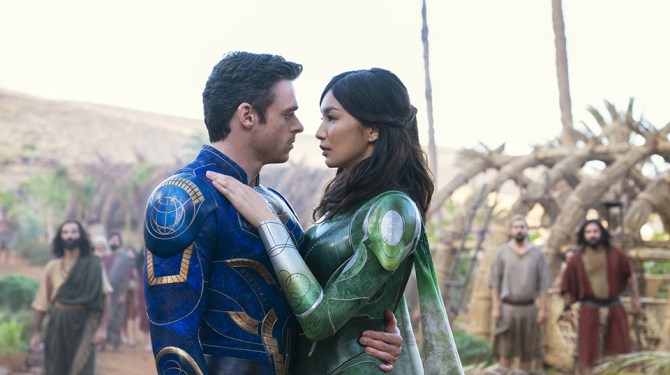 How to watch Eternals online free

What is Eternals about?

Eternals is based on Marvel Comics’ Eternals, an immortal alien race that first appeared in their own comic book series in 1976. The movie is set after the return of half of the world’s population in 2019’s Avengers: Endgame. The snap led to the return of the Eternals, who have lived in secret for more than 7,000 years and reunite to protect the Earth from their evil counterparts, the Deviants.

Who is in the Eternals cast?

The Eternals cast includes Gemma Chan as Sersi, Richard Madden as Ikaris and Angelina Jolie as Thena. See below for the full Eternals cast.

Eternals will be available to stream on Disney Plus in 2022.