If you’re a fan of Disney films like Moana, you’re definitely going to want to find out how to watch Encanto online for free once it’s available on Disney+ to stream. And yes—there’s a way to do that even if you’re not currently a Disney+ subscriber.

Encanto, which premiered in November 2021, tells the tale of the extraordinary Madrigal family living in the hidden mountains of Colombia. The film is named after their charming town, where the Madrigals live in a house of magic. Every member of the brood has a special superpower of their own—except for 15-year-old Mirabel, who is known as the only “ordinary” Madrigal. Encanto, which features all-new music by Lin-Manuel Miranda, is directed by Zootopia’s Byron Howard and Jared Bush.

For everything else there is to know about Encanto—including when and how to watch Encanto online for free after its theatrical release—just keep on reading up ahead.

When does Encanto come out?

Encanto came out in theaters on November 24, 2021. Buy tickets for your local movie theater here.

When is Encanto free on Disney Plus?

Encanto debuted Disney+ on December 24, 2021. Its arrival on the platform marks 30 days after its release in theaters. 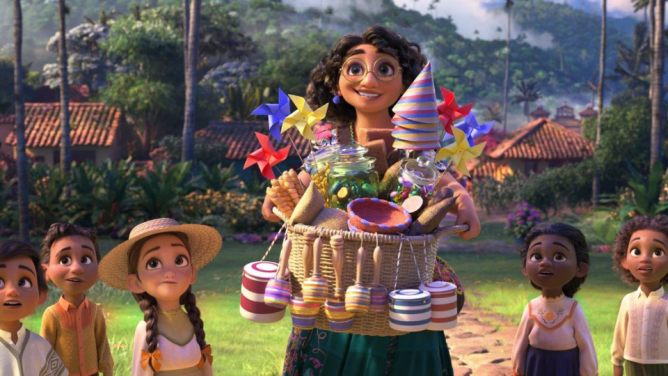 How to watch Encanto online for free

So, how can one watch Encanto online for free? Well, Encanto arrived on Disney Plus. While the service typically costs $7.99 per month or $79.99 per year (which saves subscribers $15.98 from the monthly price), there are ways to subscribe to Disney+ at no cost and watch Encanto online for free now that it’s finally available to stream. Keep on reading ahead to find out how.

While you’re at it: Verizon customers with Get More Unlimited and Play More Unlimited plans are also eligible for their Disney Bundle, which offers not only a free Disney Plus subscription for as long as you have your Verizon plan, but also free Hulu and ESPN+ subscriptions too, which saves viewers about $12.99 per month. Click here for Verizon’s FAQ on how to sign up for its Disney Bundle.

What is Encanto about?

Encanto, a word that means “charm” or “enchantment” in Spanish, follows a Colombian family called the Madrigals. The Madrigals’ home is in an enchanted town in the countryside, where every member of their family lives with magic abilities—from otherworldly strength, to special healing powers. But there’s one member of the family who is unlike the rest: Mirabel, who someone ended up without any magical powers of her own. Still, this “ordinary” member of the Madrigal family is more special than what initially meets the eye, as she may be the only person capable of saving her family’s powers when a new danger threatens their magic altogether.

Who is in the Encanto cast?

Encanto’s cast is led by actress Stephanie Beatriz in the role of Mirabel. Beatriz, who is known for her roles in In the Heights and Brooklyn Nine-Nine, will be joined by stars like That 70s Show actor Wilmer Valderrama, comedian John Leguizamo and Orange Is the New Black star, Diane Guerrero, among others. See the full cast of Encanto below.

Encanto is available to stream on Disney Plus. Here’s how to watch it for free.