For those who haven’t yet had a chance to get acquainted with the series, here’s what to know. Dexter: New Blood is a reboot of Showtime’s original series Dexter, which was based on Jeff Lindsay’s Darkly Dreaming Dexter books. The show, which ran for eight seasons from 2006 to 2013, follows antihero Dexter Morgan, a forensic bloodstain pattern analyst who works for the Miami Metro Police Department and lives a double life as a serial killer who targets other murderers. Dexter’s modus operandi is inspired by a code of ethics taught to him as a child by his adoptive father, Harry, who recognized his son’s sociopathic traits early on. These rules—referred to simply as “The Code” or “The Code of Harry”—first require that Dexter can prove that his prospective victims are guilty of murder before killing them, and secondly, that he must not allow himself to get caught.

Dexter: New Blood, which premiered on Showtime in November 2021, is set 10 years after the original Dexter ends. The show reunites viewers with Dexter as he lives under the new identity of Jim Lindsay, a local shopkeeper in Iron Lake, New York. The miniseries features Dexter’s relationship with his now grown-up son, Harrison, and his new love interest, Angela Bishop, Iron Lake’s chief of police, among others. In this new town, Dexter must fight to suppress his own urge to kill and silence the “Dark Passenger” in his mind.

When is the Dexter: New Blood release date?

Who is in the Dexter: New Blood cast? 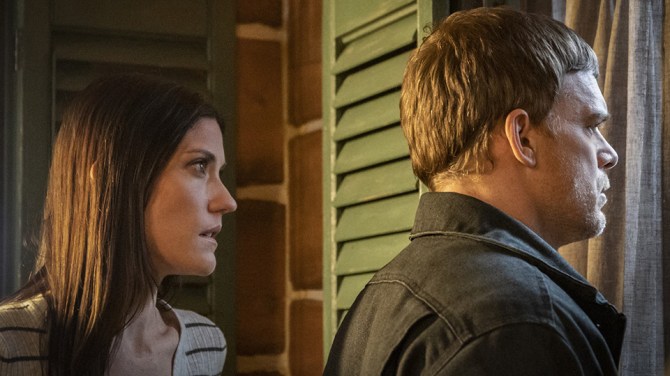 Of course, the return of Dexter Morgan can only mean one thing: Michael C. Hall is back to reprise his role as the vigilante serial killer he brought to life on the screen for eight seasons. Aside from Hall, the Dexter: New Blood cast is comprised of characters new and old. Among them is actress Jennifer Carpenter, who will reprise her role as Dexter’s sister Debra Morgan (And yes, that’s despite being dead at the end of the original series. Here’s how.) Other cast members include Julia Jones as Chief of Police Angela Bishop, Jack Alcott as Dexter’s son Harrison Morgan, Clancy Brown as unofficial town mayor Kurt Caldwell, Alano Miller as Logan, Johnny Sequoyah as Audrey, David Magidoff as Teddy, Jamie Chung as Molly and Oscar Wahlberg as Zach, among others.

How to watch Dexter: New Blood for free

Watch Dexter: New Blood online for free directly from Showtime’s website. The network’s streaming service offers a 30-day free trial. After the trial ends, users can subscribe for $10.99 per month or $99 per year (which saves users about $32 from the monthly rate.) Showtime also has a current, limited-time deal where users can subscribe for just $3.99 for the first four months—which saves them $28 from the usual rate. Showtime also offers a bundle deal with Paramount Plus for $11.99 per month. Paramount Plus costs $4.99 per month for its ad-supported plan, Paramount Premium, and and $9.99 per month for its ad-free plan, Paramount Essential. (The bundle includes Paramount Premium.) Given the price of Showtime and Paramount Plus, the bundle saves users about $4 per month.

The best free trial option to watch Dexter: New Blood online for free is Showtime on Hulu, which allows fans to watch both Showtime and Hulu for one whole month. For those who wish to continue their service after the free trial offer, Hulu is currently offering a Showtime add-on discount for only $3.99 per month for four months in addition to their base plan, which starts at $6.99 per month. Altogether, this deal saves users $32. If that sounds like something you’re interested in, we’d recommend you act fast as the deal ends soon on November 23, 2021. Of course, you also always have the option to watch Dexter: New Blood for free if you cancel after your free trial offer ends.