If you’re a Camilizer, you may want to know how to watch Cinderella online for free on Amazon Prime to see Camila Cabello as a reimagined princess.

Amazon‘s Cinderella is based on the fairytale of Cinderella first published by Charles Perrault in his collection of French fairytales, Histoires ou contes du temps passé, in 1697. Another version was published by the Brothers Grimm in their folktale collection, Grimms’ Fairy Tales, in 1812. Both versions of Cinderella were the inspirations for Walt Disney classic animated movie, Cinderella, in 1950. The movie—which was nominated for three Oscars in 1951 including one for Best Original Song for “Bibbidi-Bobbidi-Boo”—is credited for saving Walt Disney Productions from financial losses at the time.

The movie is also the inspiration for several other Cinderella adaptations, including 1997’s Cinderella starring Brandy and Whitney Houston; 2004’s A Cinderella Story starring Hilary Duff and Chad Michael Murray; and 2015’s Cinderella starring Lily James and Richard Madden. Though each movie is different, they each follow a similar story: Cinderella is the stepdaughter of a wicked stepmother and the sibling to two wicked stepsisters. When her family is invited to a ball hosted by the King and Prince, Cinderella is forced to stay at home, where she meets her Fairy Godmother, who transforms her into a beautiful princess for the night under condition: She must return home before midnight. During her rush to come back before midnight, Cinderella loses one of her glass slippers, which the Prince, who falls in love with her at the ball but doesn’t know her name, uses to find her. Though there are many others who claim the shoe is theirs, the glass slipper fits only on Cinderella’s foot. The story ends with Cinderella and the Prince marrying, and Cinderella becoming a Princess.

While Amazon’s Cinderella follows the same story for the most part, there are also many aspects that are reimagined. Ahead is how to watch Cinderella online for free on Amazon and what’s different between the adaptation and the Cinderellas that came before it. 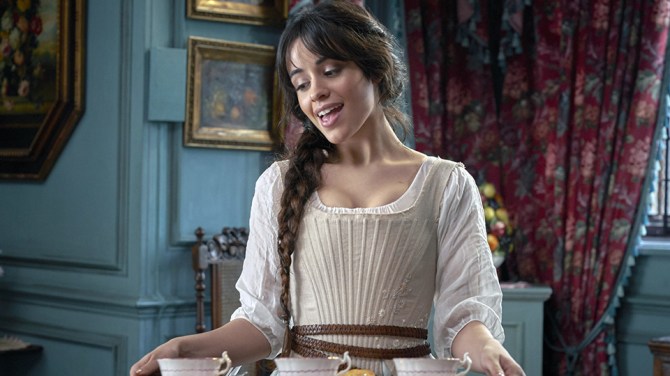 When does Cinderella 2021 come out?

Cinderella comes out on September 3, 2021, on Amazon Prime Video.

What is Cinderella 2021 about?

Amazon’s Cinderella is based on Disney’s 1950 animated movie of the same title, which was inspired by Charles Perrault’s fairytale, “Cinderella” also known as “The Little Glass Slipper.” Though Amazon’s Cinderella follows the same story as the original Disney movie and fairytale, there are some differences. The main difference is that Cinderella, who’s nicknamed Elle, isn’t just the stepdaughter of a wicked stepmother. The movie also revolves around Cinderella’s aspiration to be clothing designer and open her own store. Amazon’s Cinderella also doesn’t have a Fairy Godmother and replaced the character with Fab G, a genderless Fairy Godparent.

When does Cinderella 2021 take place?

The exact time period Amazon’s Cinderella takes place is unclear, but judging from the costumes and the set, it should take place between the 17th and 19th century, which is around the time Charles Perrault first published the fairytale and when the Brothers Grimm republished their own version in 1812.

How to watch Cinderella 2021 online for free