If you’re curious about why Samantha isn’t in the Sex and the City reboot, you may want to know how to watch And Just Like That online for free to see where Carrie, Miranda and Charlotte are now—and why they’re not still friends with Samantha.

In January 2021, HBO announced that a Sex and the City reboot,  titled And Just Like That, was in the works for HBO Max. The reboot sees the return of each of the main cast members—except Cattrall, who confirmed in 2017 that she had retired as Samantha amid her feud with SJP.  “Woke 2 a @MailOnline (poop emoji) storm! The only ‘DEMAND’ I ever made was that I didn’t want to do a 3rd film….& that was back in 2016,” Cattrall tweeted at the time after rumors that she was the reason a third Sex and the City movie was cancelled. In an interview with Piers Morgan at the time, Cattrall also confirmed her feud with SJP and claimed her co-star “could have been nicer” when they worked together on the original Sex and the City series and two movies. “We’ve never been friends,” she said. “We’ve been colleagues and, in some ways, it’s a very healthy place to be.”​ She continued, “I don’t know what her problem is. I never have.” 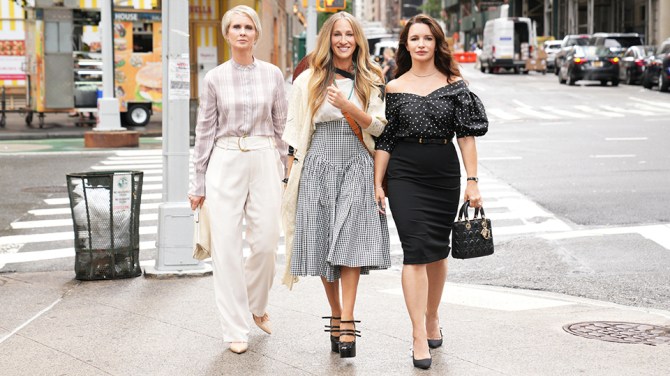 And Just Like That premieres on HBO Max on December 9, 2021, with the first two episodes.

How to watch And Just Like That online for free

While And Just Like That season 2 hasn’t been confirmed, a source close to the show told The Daily Mail in November 2021 that a second season is planned with hopes that Kim Cattrall will return as Samantha Jones. “We’ll announce eventually that the show will have a second season. This isn’t a one off, this will be a series,” the insider said. “It will be quite a while between the first and second series as Sarah Jessica Parker has a busy schedule and we have a lot of work to do to get Kim Cattrall back.” The source continued, “We all miss Kim and we hope she comes back for the second season – the door will never close on her, she is an important part of the franchise.”

The insider explained that And Just Like That decided to not kill off Samantha in case Cattrall wanted to return for the reboot in the future. “We get into her absence very quickly,”the source said. “Viewers will learn that Samantha and Carrie have fallen out over Carrie firing Samantha as her publicist and that they no longer talk. This effectively ends their personal relationship. ‘You’ll see as the series progresses over the 10 episodes that Carrie misses her friend and wants to repair the relationship…On set, Kim has been missed by everyone. The cast and crew love her and hope she returns.”

Michael Patrick King, the executive producer of And Just Like That and Sex and the City, also told The Hollywood Reporter in December 2021 that season 1 has an ending, but he’s open to a second season. “Everything I do, I always end,” he said. “I always leave a finished something. … So, there’s no crazy cliffhangers here. I’m just telling a story to see what it is.” He continued, “But of course, there’s interest [in doing more]. Everybody loves everything, in theory.” He also told Emmy magazine in November 2021 that there’s also the possibility of more And Just Like That seasons. “As we were working, it always felt like the beginning. It didn’t feel like a beginning, middle and an end,” he said. “So I think it’s possible to keep going — if we have enough good stories.”