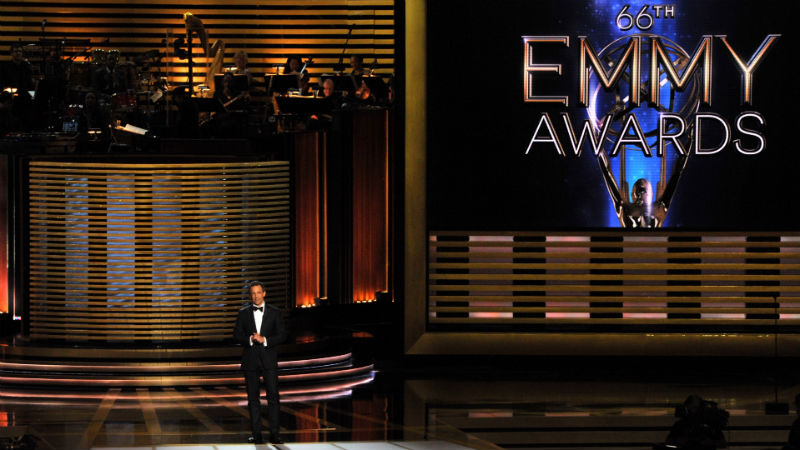 It’s rare that two major awards shows take place back to back, but that’s exactly what happened this week, with the VMAs on Sunday, and the Emmy Awards on Monday. Reporting from the front lines of both was StyleCaster’s beauty director Rachel Adler, who hit the 48-hour awardspalooza as an invited guest of Unilever (the company behind brands like Caress, Tresemme, Degree Women and Dove) and filled us in on 8 things you most definitely don’t see on TV. Read on for some interesting intel!

The VMAs is basically a concert—fans can buy tickets!

“There’s no traditional host like a typical awards show—no one to get the crowd excited or keep us entertained during commercial breaks.” Apparently, there’s barely anyone even in the floor crowd. “In reality, half the floor was empty.”

The celebrities are only allotted 10-15 rows of the entire theater, and the rest are reserved for tickets sold to fans. Basically, this means that the awards show itself has much more of a concert vibe—the entire auditorium goes nuts for the musical acts, but in between, it’s mostly folks milling around.

Malia Obama was at the VMAs, and stood on the floor!

“She was on the floor but surrounded by her security personnel—she stood a little back from the main ‘crowd’ but it  was pretty cool that her parents allowed her to stand on the floor to watch the show and not have to sit isolated in the celebrity section.”

Fights broke out at the VMAs.

Just like any big concert, there’s lots of jostling for position, and folks are not shy when it comes to staking out a good spot. When Beyonce took the stage, for example, Adler and her group witnessed a full-on cat fight over someone blocking someone else’s view.

Leading up to the Emmys red carpet, the stylists’ lips are sealed … but they usually have spot-on predictions.

We’re not sure if the various stylists working with the celebrities hitting the red carpet at the Emmys are sharing notes, it’s clear that overall themes develop early.

We spoke with Micaela Erlanger, who styled both Michelle Dockery and Natalie Dormer, before the red carpet even started, and she said, “I think this is going to be a very modern Emmys. I think we’re going to see a lot of interesting silhouettes, I think we’re going to see color, backless dresses, cut-outs, and maybe shorter hemlines. The runway this past season had a lot of those elements, so I wouldn’t be surprised if they were interpreted into red carpet style.”

Winners got a digital countdown clock to help them wrap up their speeches.

About five minutes before showtime, the show coordinators broadcast an announcement going through all the various rules of engagement during the broadcast. In addition to the obvious—no food or drinks allowed, etc.—the rules are especially focused on the soon-to-be winners and how they should behave. For example, winners this year were shown an digital countdown clock to indicate it was time to wrap up their speeches.

There’s no food or drink at the Emmys, so the celebrities duck out of the audience quite a bit.

Kate Mara was apparently a repeat offender—though she looked good doing it!

The telecast doesn’t quite capture how heartwarming the Emmys are—and how supportive the audience is of each other.

It sounds corny, but the whole award show itself is really darn touching. For example, every time “Breaking Bad” won, the entire audience stood up to congratulate them. Another example: The “In Memoriam” section of the broadcast may be sobering for folks at home, but it was absolutely heart-wrenching in the Emmys auditorium. After Billy Crystal left the stage following his Robin Williams tribute, the room was absolutely silent for several minutes.

Judith Hill (a finalist on NBC’s “The Voice”) performed at the Governors Ball.

Hill sang on a stage in the center of a rainbow room—seriously, the walls had rainbow decor and the tables were separated by color—while guests mingled. We spotted Sarah Paulson getting help adjusting her polka-dot confection of a dress, Sarah Silverman posing with her Emmy, and Claire Danes making a beeline for the bathroom. (Celebrities, they’re just like us!)