When I was in high school, you couldn’t tell me anything was more important than my prom night. It was the be-all, end-all occasion, and I spent years dreaming about it and months prepping for it, not to mention hours getting ready on the big day. Now that so many seniors are having their IRL prom nights canceled, they’ve been forced to get creative with virtual prom ideas in an attempt to make the most of their crushed prom fantasies. Yes, it’s a bummer, but here’s the good news: Students everywhere are rising to the occasion, attending and even throwing their own incredible virtual events.

For proof, we talked to five real-life high school seniors who were eager to share their different virtual prom experiences. Each of the teens who spoke up were recipients of Pandora Jewelry’s Pandora Prom Package, a mailer sent out to ten amazing seniors who excelled during their high school years. The gift was filled with prom essentials, from gorgeous Pandora jewelry to film cameras, beauty products and music speakers, and fortunately these items came in handy for digital prom, too.

If you’re one of many seniors who missed out on prom night this year, read on to hear about some virtual prom ideas you might not have considered, from Photoshopping together group pics to prepping full DJ sets to playing online games afterparty-style. You don’t have to miss out on the memories just because you can’t attend prom IRL, so throw on that gorgeous dress and read on for some major virtual prom inspo. 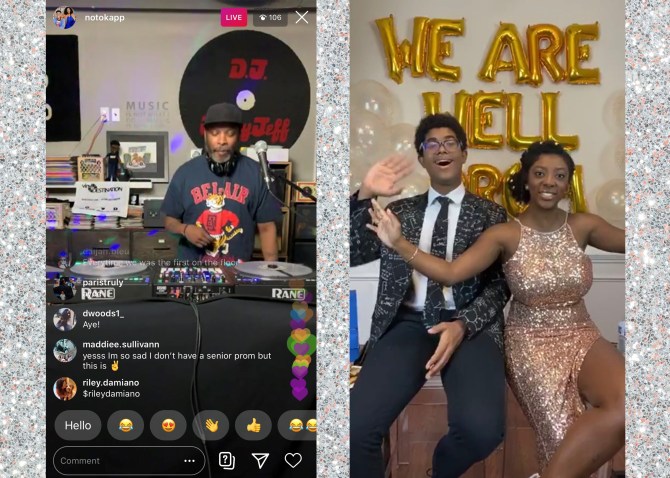 Lucas is the creator of the notOK App for mental health support, so she knows a thing or two about handling her emotions and creating a safe space. “I felt cheated and very helpless about my future when my senior year was canceled, especially when I thought about not having the prom I was looking forward to since last year,” admits Lucas. So, she decided to make the best of a bad situation: “It’s been really depressing to think about the alternatives for the most iconic moments of my senior year, and learning how to cope with that loss of those important moments, but my brother, Charlie, and I created the WE ARE WELL PROM to shine a light on mental health and bring people together.”

“I wanted my virtual prom to be as inclusive as possible, for all high school students, but I really wanted to focus on juniors and seniors. That’s why I created our digital prom court,” explains Lucas. “We had people submit videos about why it’s important to stay connected, or why it’s important to reach out before a crisis. These videos were posted to TikTok, Twitter, and Instagram.” Winners made the prom court, which consisted of 26 juniors and seniors, and were awarded $1000 apiece. Meanwhile, the prom king and queen won $2500 each.

Even though the prom was digital, Lucas still got all glammed up, thanks to Sebastian Professional styling expert Anthony Cole, who walked her through how to style her tresses for the big night. And even though she looked amazing, Lucas stresses that her reasoning for throwing the virtual prom was about so much more than just dressing up. “The main thing that kept my energy up through the night was the power I had to help so many kids, whether they used this opportunity to wear their prom dress and get dressed up, they won some cash, or they got a temporary escape from reality to have fun,” she shares. 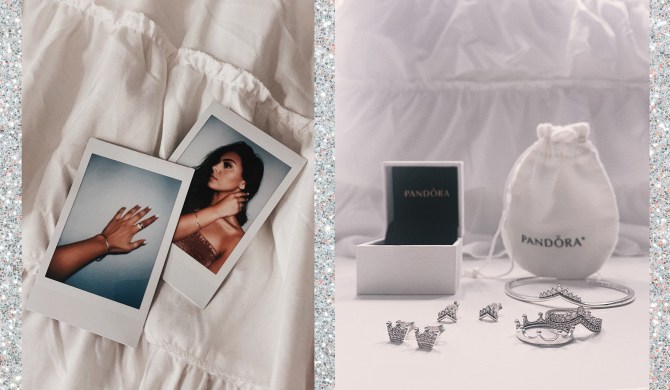 Missing out on prom was quite the blow for Hichez, who had always wanted to attend. “I was devastated; it was something I grew up looking forward to my whole life,” she shares. “I would never think in a million years that alternatives would come down to just partying with my family in my living room making Tik Toks.

While she did attend a virtual prom, Hichez focused less on pretending she was with her friends IRL and more about enjoying the night with the people around her—AKA, her family. “I decorated my house and had some fun club lights. I went around blasting all of my favorite hits and just had a good time with my family.”

Of course, Hichez made sure she still documented her prom-ready look, but she admits the low-pressure environment really allowed her to enjoy the night and let loose. “My top priority was to just have fun, which would be the same as at a regular prom. [At a real] prom, I would be stressing to see if I won prom queen or not!” Leana, you’re prom queen in our book, babe! 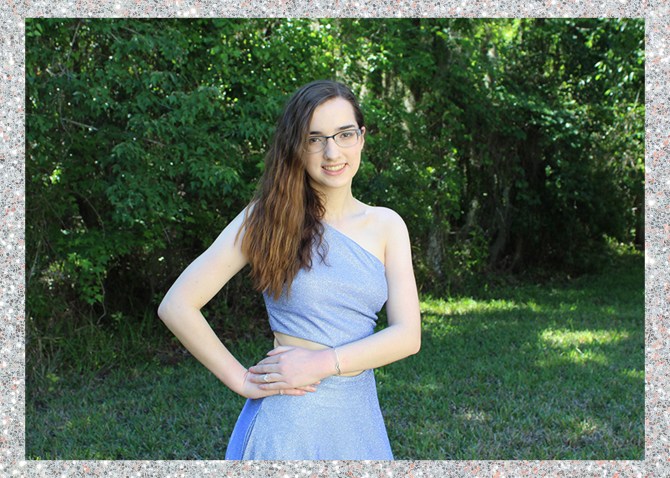 When Ludlam’s prom got canceled, she felt like months of prep had gone to waste. “I had a very fun night planned with my friends. We had all chipped in to get a themed limo, and we were excited to get food and take pictures together,” she shares. Still, she understood the severity of the situation: “I was disappointed when I heard that my prom was canceled, but I completely understand, because the safety of the community comes first.”

While her high school plans to hold its own virtual prom sometime soon, Ludlam didn’t waste any time finding an alternative. “As part of the Coke Scholar community, one of my friends invited me to an online prom called VIP 2020, and I invited my friends to join. From there, I have been planning to make decorations and have a separate online chat with my friends so we can hang out,” she says. Creating a private prom space for just her and her friends to digitally hang out during the online celebration was key in Ludlam’s eyes.

Of course, Ludlam knew she’d still want to get all dolled up, and luckily she had the perfect accessories. “I got a call from the founder of Etre Girls that she had nominated me for a prom package from Pandora Jewelry,” she said. “I received a beautiful box with jewelry, cider, a speaker, and beauty things. They’re making my prom feel very special,” she adds.

And in addition to virtual screenshots, Ludlam plans to put some Photoshop skills to use when it comes to recreating what her friend group’s real-life prom photoshoot might’ve looked like. “We are going to get photos of us together on the video call, but we are also going to get individual IRL photos to edit us together with photo-editing software,” she shares. Talk about getting creative!

While it’s not the prom she pictured, Ludlam was positive she and her pals could make the best of it. “Our priorities were to keep in touch with our friends, get some pictures, have good food, dance and play fun music,” she says. “These were pretty similar to our priorities for an IRL prom. We were excited to just have fun together while being safe.” 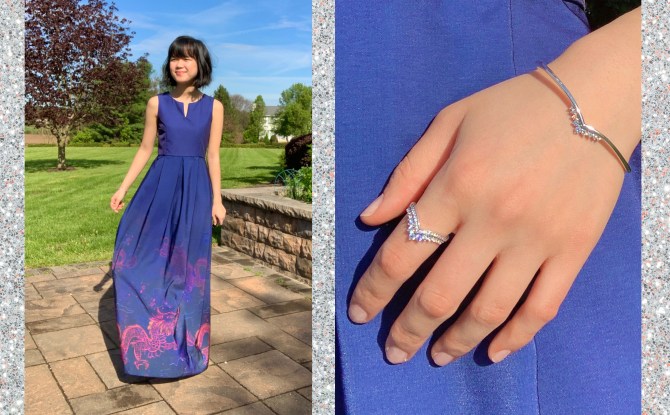 Even if her IRL prom had taken place, Ialongo would’ve been missing out: “Our prom was supposed to be May 1 at the Baltimore Museum of Art,” she explains. “However, because the Glenelg robotics team was on the track to going to the FIRST World Championships, I would have missed prom anyway.” Still, she had planned an alternative solution, to attend another school’s prom with the rest of the robotics team and consider it their own “robot prom.”

Rather than schedule an actual virtual prom, Ialongo’s high school held a “prom day” on social media, encouraging students to dress in their prom attire and post online. Ialongo sewed her own (gorg!) dress, but still wanted an online celebration with her friends—so she organized one. “It was different and there were some challenges (making sure everyone could connect via Zoom, and making sure everyone had stable internet) but it turned out great and I am so happy we were able to have this memorable senior moment,” she says.

“I just wanted everyone to have fun and hoped that the virtual prom gave my friends something to look forward to. All of my friends are so sad about how our senior year turned out,” says Ialongo, who admits her virtual prom still didn’t compare to the real thing. “Part of prom is about interacting with your friends by dancing, hugging, and laughing, but when it was virtual, it was difficult to have some of the social interactions that a real prom allows,” she explains.

Still, she went above and beyond to make her Zoom prom feel legit, from the playlist to decorations to dressing up. “ I had all my friends send pictures of them in their prom attire and why they were excited for the virtual prom. I had a few of my friends create a playlist for the DJ, and he pre-recorded himself so I could control the music during the prom,” she says. “We also played a lot of virtual games, which was also a lot of fun and kind of resembled after prom.” Her top game recs? Heads Up, Codenames, Pictionary and Jackbox.

“I just wanted the virtual prom to at least feel somewhat ‘normal,’ even though during these times, normal is different,” Ialongo notes. “It may have not been the prom we were expecting, but it was definitely memorable—and now I have recorded documentation, which is pretty funny and will be great to have in the future when we look back at our senior prom.” A recording of your entire virtual prom beats a few pre-prom photos any day! 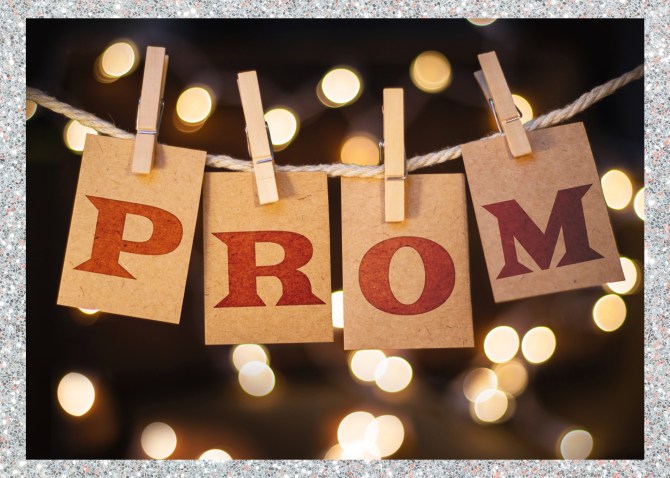 When Metollari found out prom was canceled, she couldn’t deny how disappointed she felt. “We grew up waiting for and dreaming for this event. Watching it in movies, seeing how special it was for seniors, it all felt like a dream,” she says. “Now that it was our turn to experience it, there’s no words to describe how happy and anxious we were for the day to come. The day we found out it got canceled was a day full of heartbreak and crying.” It was also the first time Metollari fully grasped how serious the pandemic had become.

Immediately, the families in Metollari’s community vowed to throw the students a real-life prom once social distancing rules lift—but in the meantime, a virtual celebration will do. “At first, when COVID-19 came up, the jokes about virtual prom and graduation arose, but never in my life would I think it would’ve taken place my senior year,” Metollari admits. “Although it is nowhere close to the IRL prom [that we] pictured in the movies growing up…we are going to cherish the opportunity of a virtual prom, as it’s another way to still make memories with the people you love.”

Despite her disappointment, Metollari knew going into virtual prom with the right attitude was key in ensuring the night went well: “My top priorities were just to have a good time with friends and try this experience that was supposed to take place on another level by doing it online.” And of course, she had to look the part: “Hoping my pictures come out nicely, hair, makeup, dress, and shoes were still the top priority, even if done virtually,” she insists.