It was 2016 and Jourdana Phillips was at Paris Fashion Week for her first big gigs since returning to modeling after a five-year break. After paying her dues as a fit model (a “real” human used to gauge a garment’s fit) for a big-name fashion designer, Phillips was asked to test with hair and makeup for an upcoming runway show. “I was like, ‘Yes! They really love me!’” Phillips says.

Her excitement quickly dwindled when she sat down in the hairstylist’s chair and watched her long curly brown locks transform into a look she would never wear, let alone walk the runway with. “I looked like a terrible Shirley Temple,” Phillips says. 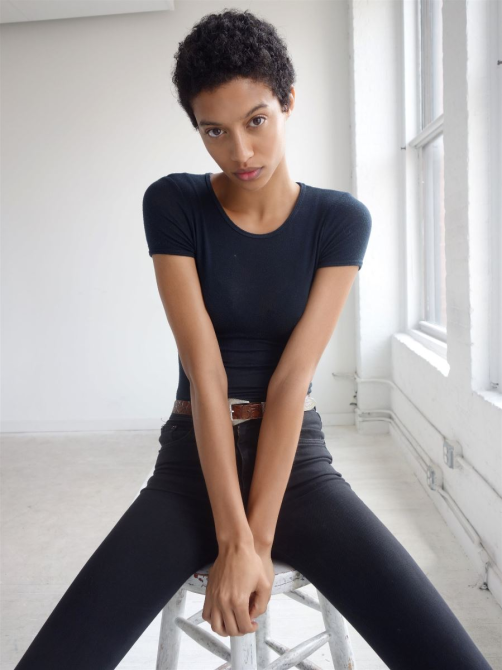 Things got worse when the designer’s team approached the hairstylist and asked why he didn’t style Phillips’s hair like other models, showing him examples. He responded by turning the tables on Phillips and blaming his work on her hair texture and quality. “He was like, ‘Oh, no. Her hair is too damaged. It’s not in good quality. It’s never going to look like that,’” Phillips says. “I was like, ‘What are you talking about? My hair is not damaged at all. I didn’t even work that much for it to be that damaged.’”

He ripped away a huge opportunity because he couldn’t get my hair the way they wanted it.

Phillips didn’t end up getting cast, but the experience sparked a fire in her to call for more diverse hairstylists, makeup artists, photographers, and creative directors in the fashion industry—a serious flaw she still believes exists, despite a recent surge in models of color.

“I was really upset because he was blaming his inability to know how to do my hair on the quality of my hair and there was nothing wrong with my hair,” Phillips says. “He ripped away a huge opportunity because he couldn’t get my hair the way they wanted it and blamed it on me. Part of the way to make it in this industry as a black model is to come to your job hair-ready. If your hair doesn’t look flawless when you walk in and if you rely on other people to do it, you’re screwed because most of the time you’re doing it on your own or teaching someone how to do it.” 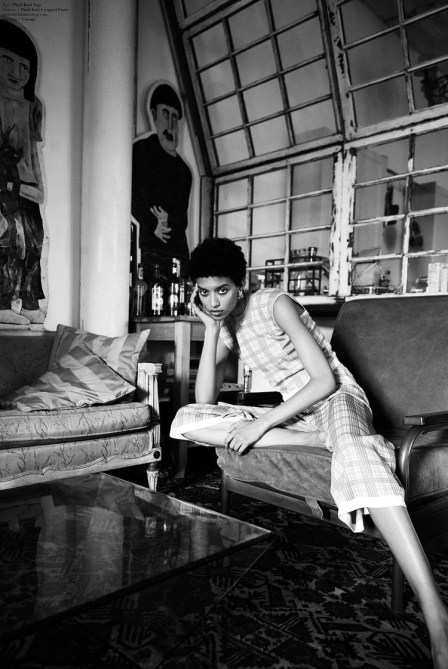 Raised in a suburb of Houston, Texas, Phillips, the daughter of two Jamaican immigrants, was bullied early on for her tall and lanky figure. She recalled crying “every night” after school because of body-shaming bullies who called her “anorexic” or told her to “eat a hamburger.”

At 11, Phillips found her place in the modeling world after she was discovered by a high-power agency in Dallas while shopping at a mall with her mom. “In Texas. they want you to be big. If you’re not big then you’re sick,” Phillips says. “When I started modeling, I saw a whole population of girls who were like me, so I was like, ‘Yay! I’m not weird. I don’t feel like such an outsider.’”

However, despite fitting in size-wise, Phillips still struggled to feel included in the fashion industry. She recalled studying runway videos after she was signed and seeing one or no black models walk in fashion shows. “I was so amazed by all the beautiful women, but I also saw how there was only spot for black girls,” Phillips says. “I was like, ‘Wow. That looks really difficult to even break in there.’” 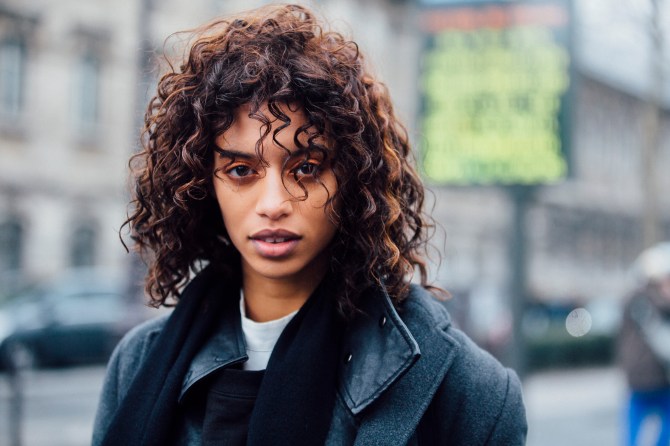 At 17, after years of dabbling in commercial jobs in Texas, Phillips packed her bags and moved to New York City with the hope of signing with a major modeling agency—a hope that was diminished after she was turned down by dozens of agencies who had already filled their “black girl quota.”

“They were like, ‘Oh, sorry. We’re only pushing one black girl. Oh, sorry. We’re only pushing one light-skin black girl and one dark skin. We already got our light-skin girl quota, so we can’t help you,’” Phillips says. “Legit, these people are saying this to my face. I couldn’t believe that was a thing. It created this sense of animosity between black models because there was only one spot, so we were looking at each other like, ‘This is my spot, girl!’ That was bad because it put us against each other.”

I was told, ‘Oh, sorry. We’re only pushing one black girl.’

To make it, Phillips was told to change her name and look to differentiate herself from black models like Jourdan Dunn and Chanel Iman, who she saw no resemblance to. “They were like, ‘You look too much like Chanel Iman, so you’re not going to work,’” Phillips says. “I was like, ‘What? No! I don’t look anything like her.’ But in their mind, they’re like, ‘Oh, but you’re light skin. So we only have one girl to play that role at that time.’” 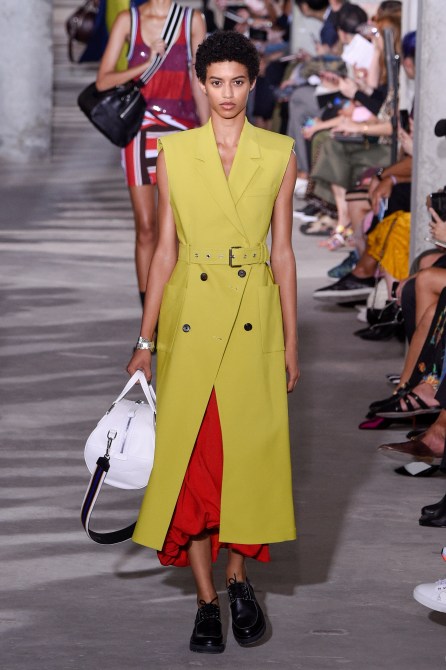 You’d think thing would get easier once Phillips finally got an agent—but they didn’t. Insecure and inexperienced, Phillips often found herself stumbling through photoshoots. She recalled a Gap presentation with Karlie Kloss and Iman, both 14 at the time, and gawking at their level of confidence. “I felt like it wasn’t the right time for me when I started,” Phillips says. “When I saw girls like Chanel and Karlie, even though they were younger than me, they seemed very sure of themselves.”

It’s hard to feel pretty going down the runway when you think they did your hair bad or they didn’t get your skin color right with makeup.

After she was fired for “bunny-hopping” on a photoshoot that asked her to leap abnormally high over the New York skyline, Phillips took a break from modeling to volunteer in Kenya and recenter herself. There, while helping build orphanages, Phillips found her passion for childhood education.

When she returned, Phillips used money stashed from a high-paying L’Oréal campaign to attend New York University’s teaching program as a placeholder until she figured out her modeling career. “I was like, ‘You know what? I’m going to school and taking this money and investing it in my education,” Phillips says. “‘If modeling is for me after that, then I’ll do it. If not, I’ll do whatever I’m doing in school.’” 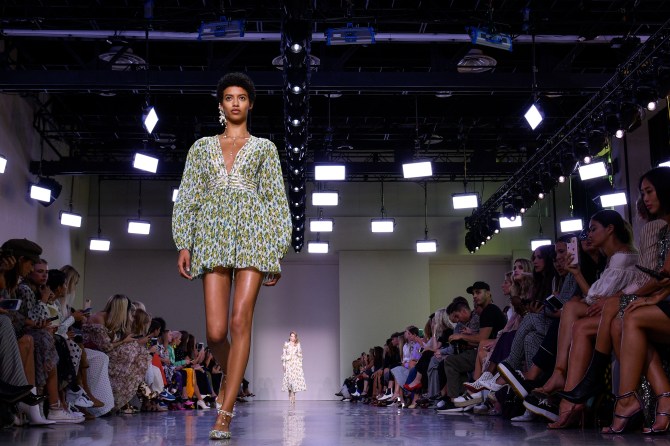 After she graduated and began teaching, Phillips still felt out of place. Deeming the traditional education system too strict for her “crazy” personality, Phillips returned to Africa to model in Cape Town, South Africa. She quickly noticed a surge in her confidence. “I felt like I could go on set and have a conversation—a real one, not just about modeling, but about life in general,” Phillips says. “People want models who have personalities and things to talk about. When you’re 18, you’re not that interesting yet because you’re just born.”

With social media, we’ve been able to put a lot of pressure on the fashion industry and allow for more women of color.

From there, Phillips’s career moved swiftly. Her agency in Cape Town set her up with an agency in New York, which flew her to France for Paris Fashion Week. Along with her newfound confidence, Phillips also credits her success to a more inclusive environment for models of color—a result of a social media boom in the late 2000s, around the time of her break.

“Because of social media, the public has more power and is able to say, ‘Look, we want to see more of us in this industry,’” Phillips says. “We’ve been able to put a lot of pressure on the fashion industry and allow for more women of color. You can shine more on social media, as opposed to before when you’re just a face and that’s it.” 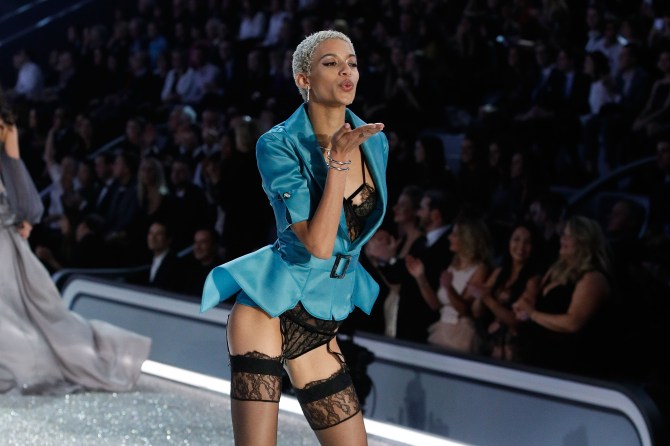 Phillips recalls countless times when she and other black models would bring their makeup and hair products to set to fix themselves in the bathroom after glam members failed to style them properly. “It’s hard to feel really pretty going down the runway when you think they did your hair bad or they didn’t get your skin color right with makeup,” Phillips says. “There’s no excuse. There are too many of us working for you to not know how to work with our hair or makeup. It’s part of your job. You need to know how to work with all kinds of hair and makeup.”

When I was younger, it didn’t really phase me because it’s almost normal not to see myself in beauty campaigns.

This discrimination is why Phillips, after losing a job because a hairstylist called her hair “damaged” at a casting, chopped her hair into an ear-length bob a year and a half ago. Shortly after, Phillips buzzed her entire head and dyed it bleach blonde per a request from Yves Saint Laurent, which cast her as its exclusive model in fall 2016. “I’m glad for my short hair because it’s super easy for myself and for everyone working on it,” Phillips says.

The next obstacle came when she auditioned for Victoria’s Secret’s 2016 show in Paris. Given that Phillips had waist-length brown hair when she was scouted by the brand’s creative director, Sophia Neophitou-Apostolou, earlier that year, Phillips was worried her new buzz cut wouldn’t resonate in the same way.

Not only was Phillips cast, she was asked to return for the 2017 Victoria’s Secret Fashion Show in Shanghai, airing November 28 on CBS, where she ditched her bleach blonde for her natural brunette. “I didn’t know if they were going to take me with brown hair, but they did,” Phillips says. “I love how supportive they are with blonde hair, brown hair. They just support me as a model, as Jourdana. It’s not about the hair. It’s about the model.” 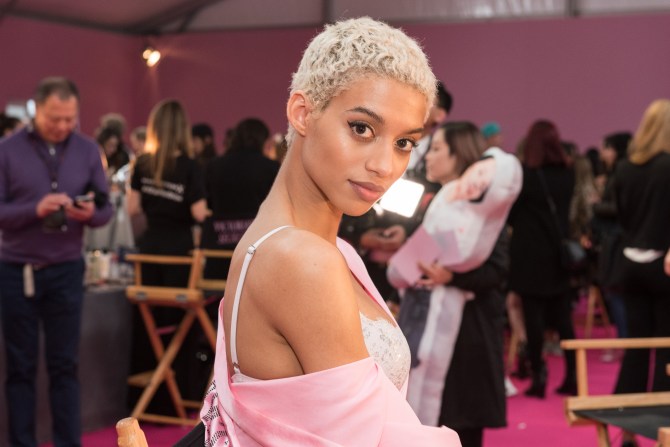 Though Phillips sees Victoria’s Secret’s actions as a symbol of the fashion industry’s progress in embracing natural beauty, she still believes there’s a long way to go. She cites advertisements with clothed white models and nude black models (an indication of hyper-sexualized black bodies, Phillips says), African-themed photoshoots, and magazine issues labeled as “The Black Issue,” rather than simply “an issue with black models in it,” as further examples of how the fashion industry can improve.

“We need teams that are more diverse—not only to portray black girls, but portray them in a way that uplifts them and not goes toward any stereotypes,” Phillips says. 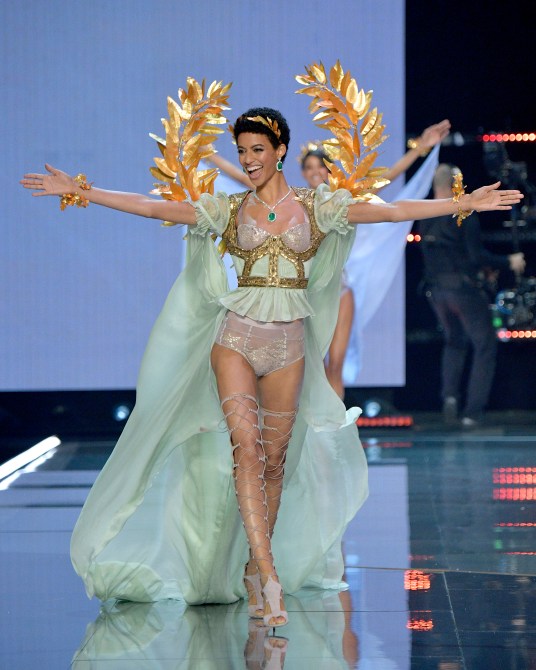 Still, given the progress already, Phillips is hopeful the fashion industry will one day catch up. “When I was younger, it didn’t really faze me because it’s almost normal not to see myself in beauty campaigns,” Phillips says. “Now, when I see black girls on covers and billboards, I’m actually paying attention, because I’m like, ‘That’s me!’ I’ve never seen so many black women in ads. It’s not just about this one girl shining. We can all shine.”