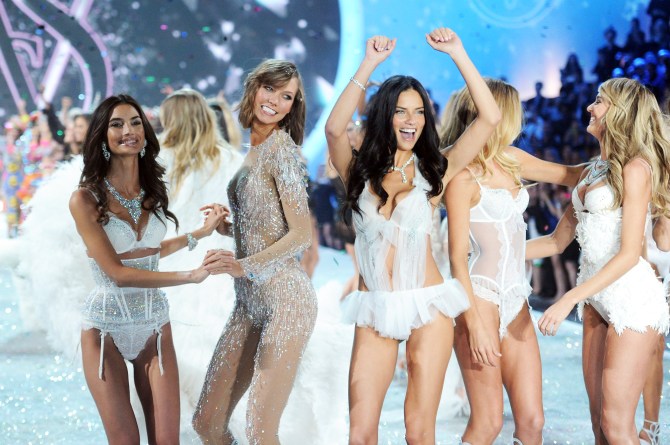 Take it from us: The Victoria’s Secret Fashion Show is not your average runway show. Most typical fashion shows rarely have big celebrities in the front row, run about 10-12 minutes, and certainly don’t have major music guests. The Victoria’s Secret Fashion Show, on the other hand, lasts the better part of an hour, features a wild hodgepodge of celebrities, and includes live performances by folks Justin Timberlake and Rihanna.

This year’s show will air tonight on CBS at 10PM EST, but for those of you who are curious about what it’s actually like to attend the show itself, here are some interesting things we saw when we went to the taping last month—some you’ll surely see this evening, and others are little-known-facts.

The show takes place at the 69th Regiment Armory in New York City.

This isn’t the only time the venue plays host to a big fashion show, either—Marc Jacobs holds his big show there every New York Fashion Week. Fun fact: Last year, the show was scheduled to take place shortly after Hurricane Sandy, and Victoria’s Secret offered up their high-octane power generators to the National Guard, who was spearheading relief efforts. 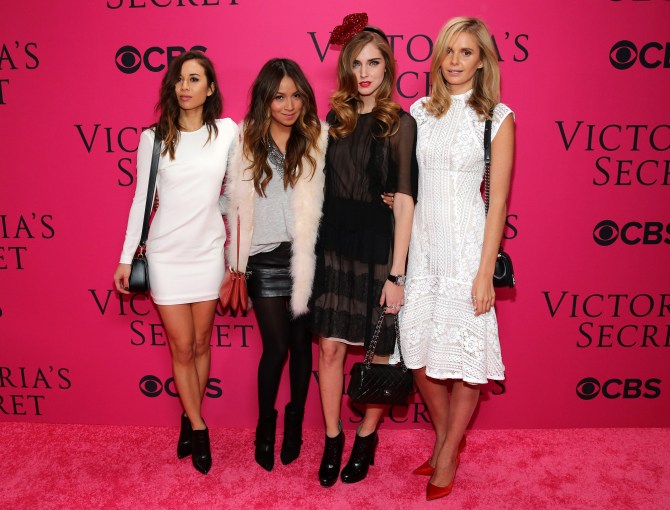 There’s a public entrance for the majority of the folks who get to attend the show, and then there’s a special entrance for celebrities and extra-special VIPs who walk Victoria’s Secret’s custom pink carpet.

The crowd is a seriously bizarre mix.

The dress code on the invitation reads “dressy cocktail attire,” and the mix of people at this event is like no other fashion show. There are your bonafide fashion insiders (Ellen von Unworth, Julia Restin-Roitfeld), athletes (Robinson Cano, Henrik Lundqvist), fashion bloggers (Man Repeller, Chiara Ferragni of The Blonde Salad), random male celebrities (Stephen Dorff, Charles Kelley of Lady Antebellum), and then a slew of non-famous folks either who paid for their tickets or were affiliated with the business in some way. It’s kind of like box seats at a big stadium event. Oh! Ciara and Estelle were also there. Oh, and Michael Bay, too.  See what we mean?

Valentino was sitting in the front row … right across the aisle from Adam Levine. 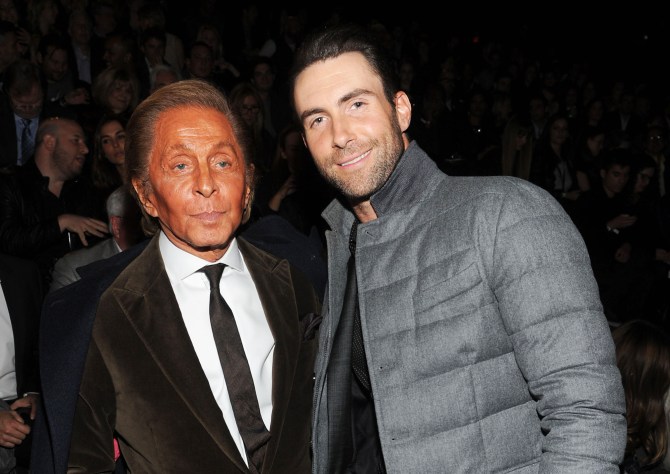 Only Victoria’s Secret could make a magical pairing like this happen.

There was likely some last-minute wrangling around the musical guests this year. 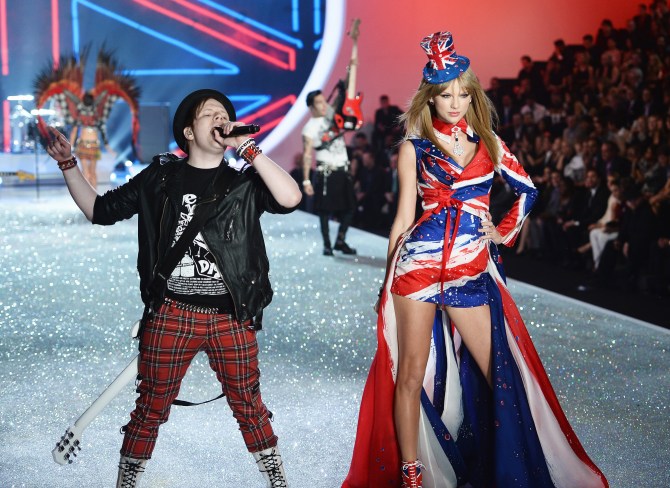 The 2012 edition of the show featured three chart-topping stars—Justin Bieber, Rihanna, and Bruno Mars—who each performed at least twice. This year’s group felt a bit more slapdash (Taylor Swift, Fall Out Boy, A Great Big World, and Neon Jungle), and only Fall Out Boy performed two of their own songs. (Our full Victoria’s Secret playlist on Spotify, click here.)

Reports swirled in August that the Victoria’s Secret producers had snagged It-Brits One Direction for the show—a move that would make sense, considering Victoria’s Secret has made a big push into the UK over the past year, opening a massive flagship in London before the Olympics—but the rumors were quickly squashed, with show reps promising an announcement about the musical guests in “early October.” By the time invitations went out in October, there was still no word on the musical guests. In fact, the official announcement that Swift and Fall Out Boy would headline the show didn’t come until the day before the event.

It should also be noted that the entire first section of the show was British themed—entitled “Rule Britannia”—a decision that would have been made months before the show itself, so it makes sense that the producers would have wanted a UK band to kick off the show. (Seeing all-American Swift swathed in the Union Jack was a bit strange.)

The audience is given little pink lights to wave during the “Pink” section of the show, which one editor noted looked a bit like nipples.

And they kind of did.

Those colorful costumes that looked vaguely like emoji? They were part of the “Pink Network” section. Get it? 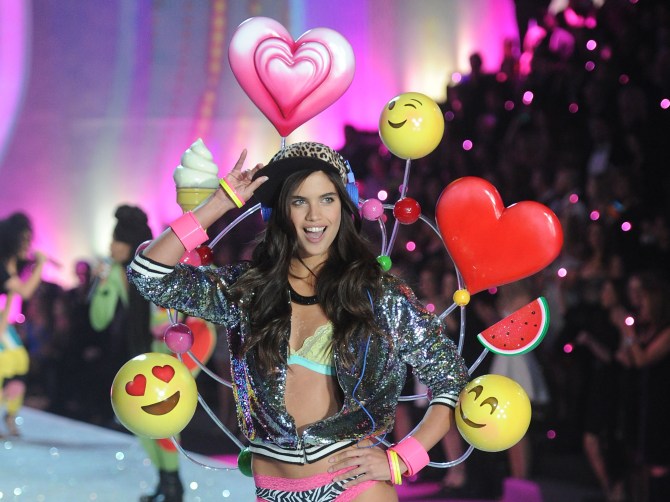 We’ll admit, we really wanted to find a way to bring home the heart-shaped balloon that said “Totes” in glitter. Wouldn’t you?

When Behati Prinsloo walked the runway, Adam Levine (her fiancé), got up out of his seat and cheered.

Kind of cute, right? She blew him a kiss.

The theme of one of the sections of the show was “Shipwrecked,” and included a set of wings that looked remarkably like a dream catcher. 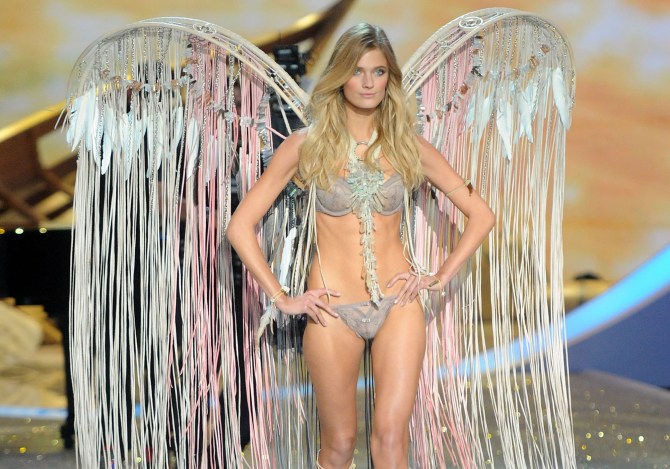 The costumes were a little like something out of a romance novel—set to dreamy piano playing by A Great Big World.

Cara Delevigne made her big Victoria’s Secret debut … and wasn’t all that great. 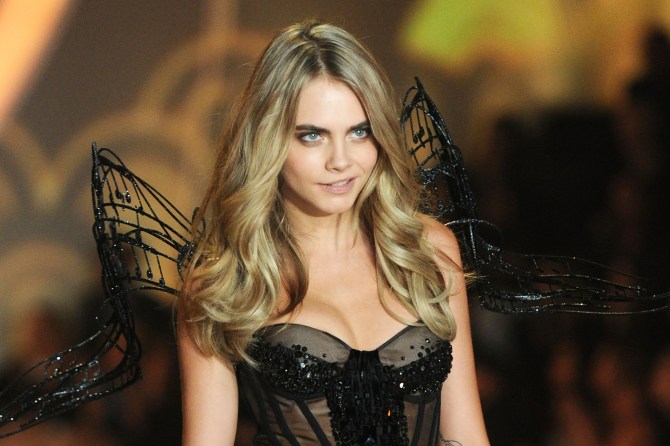 She may be one of the most buzzed-about models of the moment, landing campaign after campaign, but she was noticeable stiff and awkward on the runway—especially compared to industry vets like Adriana Lima and fresh-faced new girls like Karlie Kloss. Considering her lively personality (and stellar looks!), we were kind of surprised that she didn’t look all that thrilled to be on the runway. Not every model makes a great Angel when it comes to showtime—even if they look the part!

They did a lot of fist-pumping during “Trouble”—Now I’m lying on the cold, hard ground …. OH! Oh-oh …

The best part of the show was undoubtedly the “Snow Angels” finale—in which the front rows got a surprisingly big dusting of fake snow. 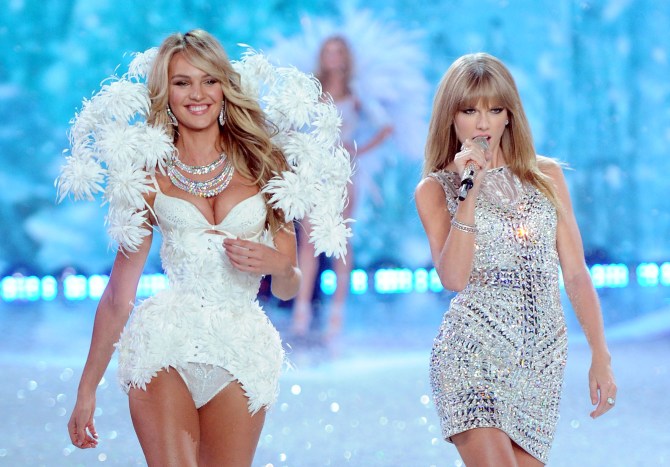 While viewers’ eyes may be glued to models in shimmering lingerie and giant angel wings (not to mention Taylor Swift in a sparkling mini), we couldn’t help but notice some perturbed front row celebrities trying desperately to shake the tufts of fake snow drifting onto the first few rows out of their perfect blow-outs and meticulous ensembles. Hey, that’s the price you pay for such a fabulous view! .