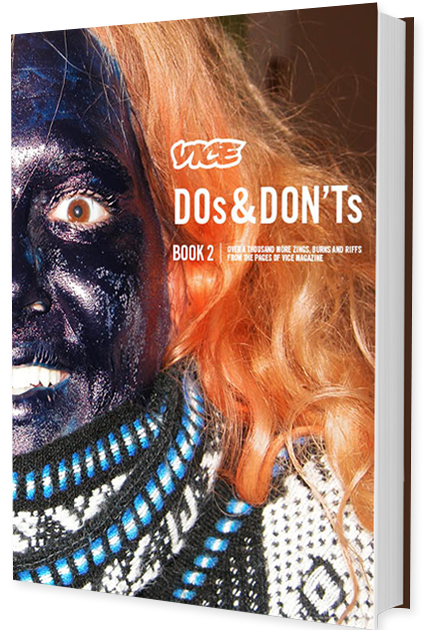 If you think that Vogue is the end-all, be-all of style or place fashion right up there with curing cancer, then this new book from the kids over at VICE is not for you. The uber-alternative media company has released a follow-up to the hilarious Vice Dos and Don’ts: 10 Years of VICE Magazine’s Street Fashion Critiques and it’s definitely a must read.

VICE DOs and DON’Ts 2: 17 Years of Street Fashion Critiques is sure to be just as witty as their last, book-bound collection of street style photos. Expect the DOs to be worthy of The Sartorialist (well, maybe not The Sartorialist, but they’ll be good) and the DON’Ts to be like watching a train wreck (a really bad one with explosions and stuff flying everywhere).

Some of the highlights (for us, at least) include seeing a few regular faces from the New York nightlife scene as well as a few celebs like The Mighty Boosh’s Julian Barratt, and even Anna Wintour sans sunglasses (spoiler alert: she is listed as a DON’T).

VICE DOs & DON’Ts Book 2 was put together by the Editors of VICE Magazine, and published by VICE Books and distributed by the good folks over at powerHouse books.

To celebrate the launch of the book, there will be an event in New York City on July 11th at Powerhouse Arena, which you should definitely attend. But, if you can’t make it don’t fret, just pick up a copy of the book while you’re running errands or online after you finish that episode of whatever you’re watching on Netflix.

Trust us — you’re going to want to bring this bad boy to the beach, a perfect place to put together your own DOs and DON’Ts list.